HomeLatest NewsThe experience of the Sakhalin region in attracting personnel will be extended...
Latest News 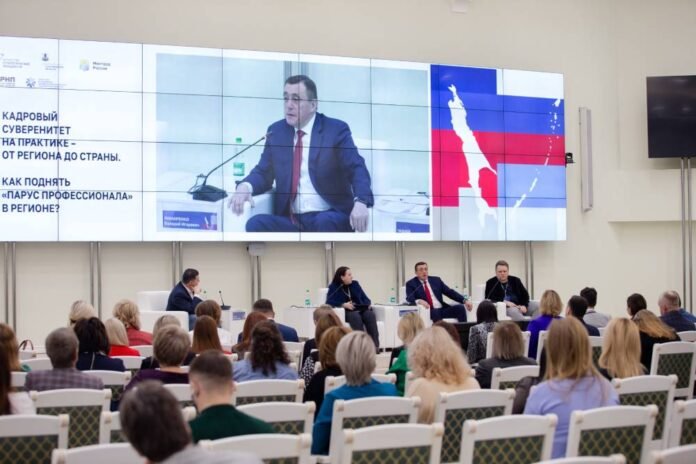 It is no coincidence that the island region was chosen as a platform for a dialogue, in which both federal experts and representatives of other issues of the Russian Federation participated.

– The Sakhalin region was one of the first in the country to begin to adapt to changing labor market conditions. The region is already testing progressive projects to train, attract and retain specialists, using solutions that are aimed at helping a person find a job and build a career, said Svetlana Chupsheva, General Director of ASI.

According to the governor of the Sakhalin region, Valery Limarenko, the main problem for the development of the territories, including the implementation of priority logistics projects, may be the lack of human resources.

– Despite everything, we continue to implement all investment projects and already at the initial stage we are thinking about how to provide them with the necessary personnel. We are working on this issue together with the ASI, the Federal Ministry of Labor and the companies. We pay great attention to the training of the necessary specialists, mainly from among the Sakhalin people. They should take the best jobs with decent wages. At the same time, we invite professionals from other regions of the country that the region needs, – emphasized Valery Limarenko at the plenary session of the forum.

Thanks to the implementation of investment projects in the coming years, 15,000 vacancies will appear in the region in high-tech industries, which will give the same number in related areas. “This is a challenge for us. The lack of human resources should not hinder the development of our region,” says Limarenko.

However, in addition to a good job, comfortable living conditions are also important for people. Thus, the Sakhalin personnel project “Career. Home. Family” provides not only employment in high-tech industries, but also the opportunity to rent or buy housing under preferential mortgage programs, a wide range of social support measures , good conditions for self-development and recreation.

Valery Limarenko noted that today the Sakhalin region is among the top three regions of Russia in terms of housing start-up per capita. On the islands, more than one square meter per person per year is rented, while the goal for the Russian Federation as a whole is 0.8 “squares” by 2030.

– Not all regions and not all countries can boast of such indicators for housing construction. The Far East is changing, especially Sakhalin and the Kuriles. This is not a dead end, but a developed region of Pacific Russia. Speaking of human capital, we mean not only earning money, but also life in a broad sense, and the Sakhalin region is a great place for this, – says Robert Urazov, General Director of the Agency for Skills Development. and Professions, Director of ASI Human Resources Division.

All this makes the islands an ideal platform for pilot projects in the field of attracting specialists.

– The ASI team has created a methodology for building the personal sovereignty of the country “Sailing”. It is based on three aspects of human motivation: in development, talent and professionalism, in the presence of world and global challenges, in the opportunity to be sued and benefit the homeland. The Sakhalin region is in many ways a unique territory. The personnel challenges are exaggerated here, but the management models are modern, highly adaptable, – said Robert Urazov.

So if, according to him, Parus can work effectively on the islands, it will surely be replicated in other regions.

This year, the Sakhalin Region has become a platform for the federal Let’s Win Together experiment. Their goal is to create the first unique ROI platform in building a career. The scheme is as follows: a citizen turns to the operator with a request. The operator selects an employer from among the companies – partners of the project and forms a career plan. Then, according to the contract, he pays for the applicant’s career guidance, additional training and internships. After training, a person finds a job and within a specified period (for each it is individual) returns the investment to the operator.

– The project has already received the first results: 38 people participated in the first wave, while 28 of them wanted to acquire skills in the field of social protection. By mid-November, the first 22 people graduated from the program and were employed. The second wave begins in December. This project, in our opinion, should close the shortage of qualified personnel for the Far East, Elena Mukhtiyarova, Deputy Minister of Labor and Social Protection of Russia, told the forum participants.

Now this tool is preparing to scale to other regions of the Far Eastern Federal District.

Other mechanisms include a labor mobility program co-financed by the federal government. The employer becomes the recipient of support, he can receive from 200 thousand rubles to one million.

At conferences, seminars and master classes as part of the National Human Resources Initiative, participants and speakers presented best practices to increase the attractiveness of the territory for staff, creating opportunities for continuous training of specialists. “There is a need to generally change the general approach to personnel development and move from the “human capital” model to a better one,” said the Special Representative of the President of Russia for Digital and Technological Development, Director of “Young Professionals” . The ASI leadership expressed, perhaps, the main idea of ​​​​the Dmitry Peskov forum. In his opinion, a person is not a number, not a sum, not a capital. And we are talking about the maximum disclosure of your capabilities, and any system of motivation, education, career path must be based on the proposal to build a career throughout life.