HomeLatest NewsThe expert revealed the secret of the transformation of Philip Kirkorov: for...
Latest News

The expert revealed the secret of the transformation of Philip Kirkorov: for eternal youth, only these three procedures are enough 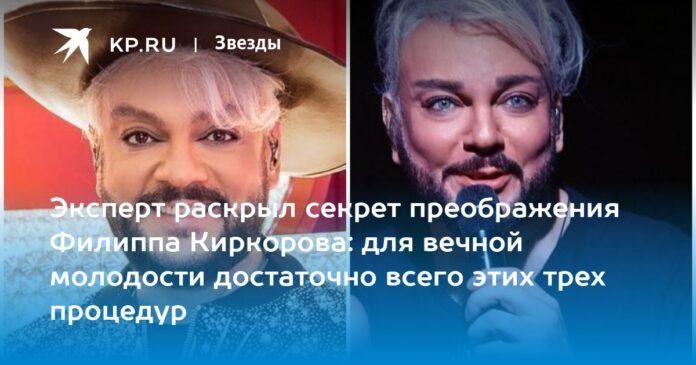 The king of pop made plastic and inserted blue lenses for a wow effect.

Philip Kirkorov, 55, entered the new year with a new face and body, losing a couple of decades and extra pounds. After a visit to a plastic surgeon, the king of pop became the owner of a relief press, an open look and a perfectly even forehead. However, the artist hides exactly what procedures he had to resort to.

Meanwhile, a close look is enough for experts to determine the magical manipulations with the face and body of Philip Bedrosovich from the photo. So, plastic surgeon Vladimir Plakhotin is sure that the singer chose three procedures for eternal youth, one of which has not yet been done.

– With age, the face “drops”, including the eyelids, the look becomes like under the eyebrows. Kirkorov underwent endoscopic temporary lifting – they “picked up” the forehead, eyebrows, the outer corners of the eyebrows, the temporal part; they lifted the so-called middle zone, the area under the eyes, the cheek area, explains the plastic surgeon. – During the endoscopy, small incisions of 1.5 – 2 cm are made in the scalp of the forehead and temples so that the scars are not seen later. Through these three punctures, the doctor enters with an endoscope and separates the muscles from the periosteum to free the muscle tissue and lift it.

2. Blepharoplasty of the lower eyelids

– In addition, the king of pop resorted to blepharoplasty of the lower eyelids and check lifting: the lower part of the orbit is in excellent condition, – notes Vladimir Plakhotin. -Philip Bedrosovich got perfect eyebrows, forehead and lower eyelids, thanks to which his eyes opened wide.

– The artist’s upper eyelids have not yet been touched, because after the endoscopic temporary lifting, some time must pass; he must understand how much the eyebrows will rise, and then “pick up” the rest, our expert is sure. – Philip has a small hernia in the upper eyelids; most likely, he will be removed and redistributed along the eyelid so that it does not sag, and the excess skin will be “gathered”. I think that in the near future we will see the result of this procedure, and then Kirkorov will look 100% real.

Also, fans suspect that it is no coincidence that the singer dyed his beard and made it more voluminous: supposedly, scars can be hidden under the hair. However, Vladimir Plakhotin doubts this.

– Kirkorov’s beard, if he hides something, then he just flew. There are no scars from operations, they are all behind or in front of the ears, says the plastic surgeon.

The singer’s stomach, according to our expert, underwent serious surgery.

– If done to the maximum, a large amount of fat is removed from the stomach, up to 4-5 kg. This is the so-called VASER liposuction, which is carried out using a special American apparatus, Plakhotin continues. – First, the subcutaneous fat is filled with a certain solution, it destroys the fat to the state of mush. And then we suck this suspension with another apparatus. This technique perfectly removes everything unnecessary – literally a centimeter of subcutaneous fat remains between the muscle wall and the skin. And due to the same technology, it is possible to draw the so-called “cubes” from the press. Most likely, Kirkorov also underwent a tummy tuck: the stomach was cut, the navel was moved higher, and the incision in the inguinal region was removed.

How much does such a transformation cost?

– I think that Philip Bedrosovich did plastic surgery of the abdomen and face at the same time, two specialists worked in parallel. The face, most likely, cost about 1 million. The belly, from 1 to 1.5 million. So, the singer stayed within the maximum 3 million, our expert believes.