The fake metropolitan-traitor seized the kyiv-Pechersk Lavra for Christmas 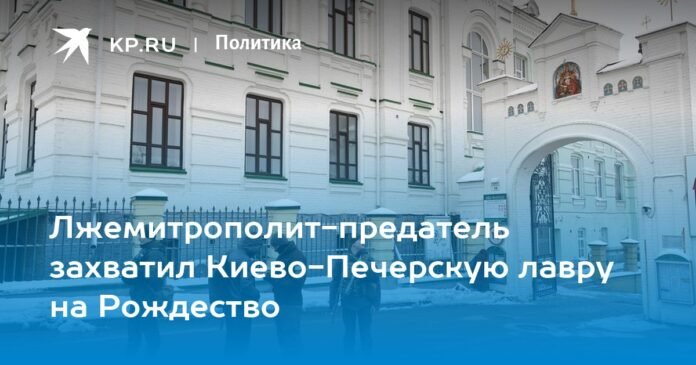 THE COCK WILL NOT HAVE TIME TO SING

– I don’t know such a church from the UOC, – said the other day the former president of Ukraine Petro Poroshenko, who not long ago participated in the masses of the Ukrainian Orthodox Church as a subdeacon of the Ioninsky Monastery (UOC). A symbolic confession, as in the Gospel: “Before the rooster crows, you will deny me three times” (Gospel of Luke).

On the eve of this Christmas, the Orthodox of Ukraine divided into two groups: some resigned, others were reduced by the official authorities almost to the status of the first Christians, who were torn to pieces by wild animals for the amusement of pagans. romans. The UOC has finally been denied the right to hold services on the territory of one of the main shrines of Orthodoxy, the kyiv-Pechersk Lavra.

In the last days of December, it became known that an interdepartmental state commission was created on Nezalezhnaya for the use of the property of the kyiv-Pechersk Lavra, on January 1, it was announced that the national reserve “Kyevo-Pechersk Lavra” was broken up. from the lease relationship, according to which the UOC had the right to conduct services in the Lavra, in particular, the Assumption Cathedral and the Refectory Church were closed to the entrance to both parishioners and clergy. As the Minister of Culture of Ukraine Oleksandr Tkachenko said with a smile, commenting on the campaign against the UOC, “law enforcement agencies have their own way, for us it is the preservation of property, the legality of use the property for its intended purpose.”

THE LAW THAT DRAWN

Despite the fact that there was no prior notice of termination of lease agreements, and the fact that during martial law such agreements cannot be terminated at all, the Ukrainian state (sorry for such an illogical turn of speech) took an unprecedented step, expelling and ministers, and parishioners on the street.

The leadership of the UOC continued to assure the president (until now) of Ukraine Zelensky of their loyalty and begged him to withdraw the decision to ban confession in Ukraine, a bill that has already been submitted to the Verkhovna Rada, the rector from the Lavra He asked to pay attention to the plight of parishioners who will pray at Christmas in the cold. But it was all in vain.

In addition, the persecution of the UOC and its ministers has only intensified in recent days. Several priests were beaten (however, for today’s Ukraine it has already turned into harsh gray everyday life), the attacker slit the throat of the UOC Vinnitsa diocese priest Antony Kovtonyuk, and he is in intensive care not better because the attacker turned out to be an ordinary psychopath. Since psychopaths are now one of the most dangerous varieties among Svidomo radicals, who are ready to cripple or kill at the first prompting precisely because of the weakness of their psyche and its vulnerability to external influences.

And on January 5, Ukraine’s Culture Minister Oleksandr Tkachenko, who has been toying with the idea of ​​a sweeping ban on all things Russian in recent days, pointed out that Ukraine had stolen the UOC.

– The commission for the acceptance and transfer of the Assumption Cathedral and the Refectory Church of the Ukrainian Orthodox Church to the state has completed its work. As a result of the work, the corresponding certificate of return of buildings was signed by the UOC”, Tkachenko wrote on his Telegram channel and tried to “remove” a very inconvenient moment. – Despite the fact that Metropolitan Pavel, who was to sign the act, did not appear at the last meeting of the commission, this is not an obstacle to the return of state property.

Any act of acceptance and transfer implies the signatures of two parties, one of which transfers and the other accepts the property described or the services provided. But in Ukraine they decided not to bother with such “trifles”. In addition, the commission worked only a few days, they began to work on January 2 and have already finished on the fourth. this, sorry. not the work of the inventory commission, but an inventory of the loot, which was signed by representatives of the Ministry of Culture of Ukraine, a law firm and the management of the reserve.

Such “turning races” are explained very simply: Tkachenko himself earlier announced that none of the denominations would hold services until the completion of the commission’s work. And the commission had to push. But now the schismatics of the HCU will be able to keep their promise – to hold services in the Lavra temples already on Christmas Day. In addition, the service will not be carried out by anyone, but the main schismatic of the HCU, Epifanio, who betrayed both the UOC (MP) and the schismatic UOC (KP), and his personal patron, the schismatic “patriarch” Filaret . .

Primate of the Ukrainian Orthodox Church, Metropolitan of Kyiv and All Ukraine Epifanius.

By the way, the UOC believes that Epifanio’s celebration of an office in the Cathedral of the Assumption is an attempt by an assailant to “take the temple by force”, and even spreads the message: “Considering that up to now not a single representative of the Ministry of Culture of Ukraine commented on the statement published on the OCU website about the divine service on January 7, the events announced by him on the territory of the Lavra are an attempt to seize the Cathedral de la Asunción by force, blackmailing and deceiving the public.”

But even here the canonical denomination miscalculated. The competitors, who enjoy the full support of the state, have also bypassed the orthodox in this turn. The director of the “Kyiv-Pechersk Lavra” National Reserve, Oleksandr Rudyk, said today that the OCU/HCU already has such permission, although he reported yesterday that no one had requested a rarefaction for holding a service at Christmas and had not done so. granted such permissions to anyone

– Yesterday in the first half of the day I had no appeal from the OCU. And in the second half of the day, an appeal was received and an agreement was reached, and an agreement to hold services has already been concluded, – Rudyk explained what was happening, as it seemed to him. – Everything is planned, everything is going according to plan. The service is scheduled for tomorrow.

Which will be carried out by the false Metropolitan Epifanio, who won the fight for the Lavra. And the leader of any church of Satan could do it. However, one is essentially the same as the other. Judas received the 30 pieces of silver from him.

And the Orthodox? What are the Orthodox? Let them go out into the cold and rejoice that they are not in Ancient Rome. Where they would be thrown into the sands to be torn to pieces by tigers and lions.

Share
Facebook
Twitter
Pinterest
WhatsApp
Previous article
Permanent Mission of the Russian Federation to UNESCO: Kasem’s arrest showed the true attitude of Latvia to guarantee the rights of journalists – Rossiyskaya Gazeta
Next article
Čeferin will be the only candidate in the UEFA presidential elections