HomeLatest NewsThe financial profile of the Ibex 35 shields it in a 2022...
Latest News

The financial profile of the Ibex 35 shields it in a 2022 of war, rates and inflation 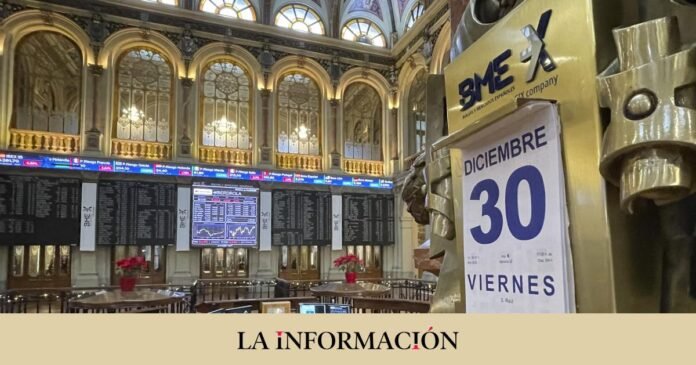 It was aiming to be the year of recovery after the pandemic and these twelve months have turned out to be a roller coaster. The stock market closes an unusual financial year in which the Covid, with omicron as the finishing touch, has handed over the baton to another black swan, a war at the gates of Europe, which has as side effects the energy crisis, inflation and the awakening of monetary policy. The financial markets have not been immune to this situation, not even in Spain, where the Ibex 35 has not escaped volatility, with an annual decline of 5.6%, up to 8,220 points.

Losses have been the dominant trend in the reference index of the Spanish stock market, in which it has only closed five months in positive: April (+1.65%), May (+3.11%), July (+0.71%), October (+8%) and November (+5%). Precisely the autumn push has contributed to cushion the bump and it is positioned as one of the best unemployed compared to the rest of the main European squares. Thus, it is left half that of the French Cac (-9.5%) and almost three times less than the German Dax (-12%) and the Italian Mib (-13%).

However, other indicators such as the Ftse 100 in London ended with an advance of 0.9% in local currency (-4.25% with the currency effect) and the Portuguese PSI recorded an annual rise of 2.81%, increased by Galp, which boosts him by more than 270 points. On the other side of the Atlantic, the losses on Wall Street are more accentuated with a drop of over 30% in the Nasdaq, while in the S&P500 it is close to 20%. The Dow Jones, for its part, records a fall of more than 8% in the annual calculation, in the worst year since 2008, when Lehman Brothers went bankrupt.

It should be noted that the stock markets of the Old Continent will come from registering strong increases in 2021, so they somehow offset this rebound, which was almost 28% in Paris, 15% in Frankfurt and 14% in Milan and London. Something more modest was the rise that the Ibex recorded, close to 8%, which was not assigned to recover the losses of 2020 (-15.45%). With the setback of this 2022, there is still ground to go to recover the level prior to the coronavirus, after closing 2019 at 9,545 points.

The great weight exercised by the banking sector has contributed to the fact that the blow to Spanish equities has been less than that of other European parquets. Financial entities together with energy companies have been the companies that have pulled the stock market, given that two thirds of the Ibex are companies that operate in these sectors. Added to this is the other 10% weight held by Cellnex and Telefónica, companies that do well on the stock market in high inflation environments. Only CaixaBank, BBVA, Iberdrola and Repsol have contributed more than 566 positive points, becoming a key piece in maintaining the 8,000 point barrier, which it has fought not to lose over the last two months.

The balance is similar in the calculation of annual revaluation, with the firm headed by Gonzalo Gortázar in the lead after registering a rise of more than 51%, followed by Banco Sabadell (+48%), Repsol (+42%) and Bankinter (+ 38%). Domestic banks have performed better on the stock market compared to BBVA (+8.61%) or Banco Santander, which dropped more than 4%, given its high exposure to other international markets. With all this, it will adapt to one of the main pillars of this 2022, which Unicaja Banco has joined in the final stretch, after entering the club of the 35 companies with the largest capitalization, with a rise in the year of more than 21% , and the increase in the weight of CaixaBank, which goes from weighing 80% to 100% of its market capitalization.

The awakening of monetary policy with the roar of inflation, which has placed interest rates from 0% to 2.5% in the case of the euro zone and 4.5% in the United States, has led central banks to beat the record in the speed of these climbs, unprecedented to date. This is precisely what has given banks oxygen to improve their trade margins, making them become a favorite bet for investors in this strange 2022 and it is expected that they will continue to pull the stock market for the next twelve months. This “strength” should give impetus to the Ibex, according to Bankinter, to conquer the entire 9,000 by the end of 2023, a figure that rises to almost 11,000 from Income 4, with a rise of 30%.

In the opposite band, the biggest drops were recorded by Fluidra, which dropped almost 60% in the last twelve months, Rovi (-51%), Cellnex Telecom (-39%), Grifols (-35%) and Colonial (- 27%). Up to four values ​​have been lost from the Ibex this year: Siemens Gamesa, PharmaMar, Almirall and CIE Automotive giving way to Unicaja Banco, Logista, Sacyr and Acciona Energía.

The rise in inflation and the more restrictive speeches of both the European Central Bank (ECB) and the Federal Reserve have led fixed income to record another black year, with a rebound in yields. In Spain, the interest on the ten-year bond has already exceeded 3.6% compared to 0.5% in December 2021, which translates into eight-year highs, when the economy had not yet fully recovered from the explosion of the housing bubble.

Just look at the interest on short-term bonds, which have jumped from -0.5% to 2.6% in just twelve months, encouraged precisely by the rise in prices and the tightening of monetary policy, leading analysts to bet on fixed income for 2023 in a medium-term position with the expectation that they can continue to rise. Investors are leaving behind a turbulent 2022 waiting for the situation in the markets to stabilize with the recession on the horizon.