The five Ibex companies with the highest dividend yield for 2023 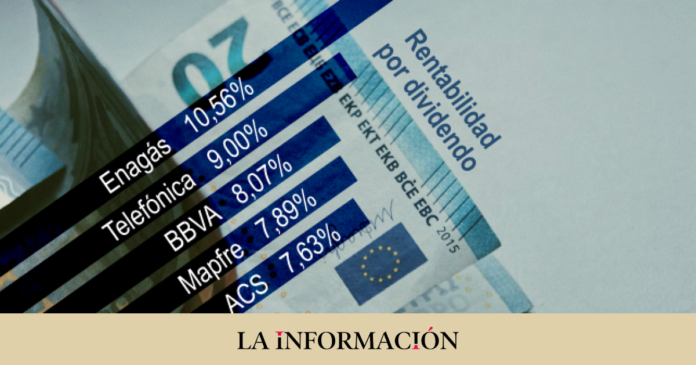 Shareholder remuneration is one of the main criteria that investors take into account when drawing up their investment strategy on the stock market. Dividends serve as a guide when creating a portfolio with a view to optimizing profitability in a medium and long-term horizon. In the case of Spain, the average return in the last three decades of variable income reaches 4%.

In a year as volatile as 2022 has been, marked by the war in Ukraine, the payment to shareholders of selective companies has experienced a rebound of 29%, up to 23,600 million between November and November, due to the repurchases of shares. that mark an all-time high. These figures have been driven by the pull of the banks after the end of the ECB veto to distribute profits among its investors and the increase in its treasury stock.

With this scenario as a starting point to face 2023, if you are one of the winners in the Extraordinary Christmas Draw, you may have a question about the problems with which companies can obtain the maximum return in one year. The consensus of analysts collected by ‘Bloomberg’ highlights a ‘top 5’ of companies with which to achieve gross profitability of more than 7% in terms of profit harvest and in a context of high inflation.

Enagás stands as the ‘king’ of the dividend

The energy crisis has been one of the protagonists in this turbulent 2022 significant contribution of the Ibex.

Among all those listed on the Spanish stock market, Enagás starts first in this race with the expectation that it can offer a gross dividend yield of 10.5%. After closing this Wednesday at 16.13 euros, analysts expect it to reach a twelve-month target price of 17.21 euros. In its new 2022-2030 strategic plan, the gas company confirms the 1% annual increase in the dividend in 2023 to keep it at 1.74 euros between 2024 and 2026. Despite this, it is noteworthy that less than a fifth advise taking into account the positions group led by Antonio Llarden after losing 17% of its value on the stock market.

The company directed by José María Álvarez-Pallete executed the distribution of 0.15 euros per title in cash last week, in addition to another 15 cents that it has pending distribution in June 2023. Looking ahead to the next financial year, it occupies the second position in the ‘ranking’ by profitability for the shareholder, which rises to 9%.

Analysts give it a twelve-month target price of 4.56 euros and buy recommendations of 47%. It should be noted that it is in full review of its 2019-2022 strategic plan. The company has not had its best year on the stock market, with an annual recovery of more than 16%, in line with the market turbulence.

BBVA is the only one among the large banks

Most of the analysis houses place the bank as the star values ​​for the following year. The increase in their margins due to the rise in interest rates and the use of massive planes to fatten their treasury stock are the perfect ‘candy’ for those who seek to get a return on the money obtained in the Christmas Lottery.

Despite this, BBVA is the only one of the large entities that appears among the top positions in return on profits, with 8.07%. Only 3.3% advise getting rid of the titles, which have the potential to reach 6.91 euros. At the close of the market this Wednesday they have ended at 5.69% and so far this year it has fallen by almost 20%. Contrary to entities with a domestic profile, its high international exposure has penalized it in the market.

Mapfre maintains its ‘pay-out’ at 50%

In third position is Mapfre. Analysts give a dividend yield of 7.8% charged to the 2023 financial year, with a target price of 2.08 euros, compared to 1.83 euros at which it closed this Wednesday. The insurer headed by Antonio Huertas accumulates an annual loss on the stock market of more than 15%, although it has recovered some ground since reaching annual lows this summer.

Its roadmap for the next two years contemplates a ‘pay-out’ of 50%, as long as the economic situation does not deteriorate. For the moment, between January and September its attributed net profit has been reduced by 6.9%, to 488 million, despite raising its income by 12.1%, above 22,000 million.

Investing in ACS offers 7.6% via dividend

The construction and engineering multinational completes the five Ibex companies with the greatest pull for the shareholder, with a potential of 7.63% and a target price of 29.3 euros, compared to the 26.67 in which it is at closing market this Wednesday. The group has lost a slight 1.36% since January on the stock market, which opens the door to a possible comeback. In the first nine months of the year it has managed to double profits, up to 480 million and this year it plans to distribute a total of 919 million, a figure that includes the share repurchase plan and a scrip dividend both in ACS and to the minority interests of its subsidiaries Hochtief and Cimic.