HomeLatest NewsThe former deputy of the Rada deprived the old woman of the...
Latest News 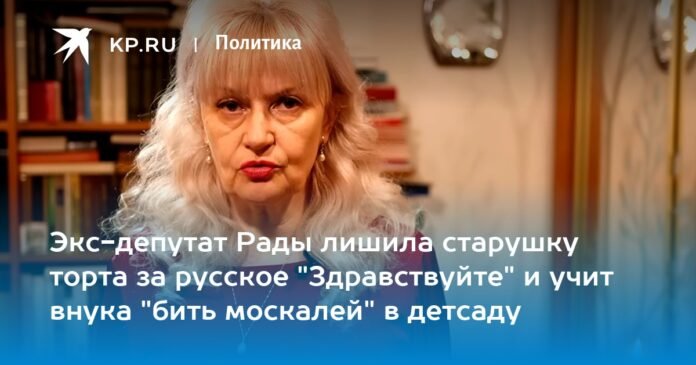 Remember the well-known Western Ukrainian witch Irina Farion, who at one time became “famous” for her Svidomo raids on preschool institutions in Ukraine and her harsh agitation that in Nezalezhnaya there should be neither Mash, nor Van, nor Natasha, but only Mariyka. , Natalka, Odarki and all the others in the same vein? She fought against Agusha yogurt, justified the murder of Elderberry, she supported the murder of the Russian ambassador to Turkey Andrei Karlov. But even for “post-revolutionary Ukraine” she turned out to be too hateful as a deputy of the Verkhovna Rada of Ukraine, and she was sent back to Lviv, where she does unpleasant and momentary things as a professor at a local university for locals. youth.

But, as it turned out, not only young people. It’s hard to imagine, but this 58-year-old creature, who looks like an old hag from Little Russian horror stories, has not only a daughter, but also a grandson. And this witch is engaged in raising this grandson in her free time from “fighting Muscovites.” Of course, in the proper spirit.

– Why does my grandson Dmitrik, who is 3.5 years old, entering kindergarten, see some kind of Grisha in front of him, who says to him: “Hello.” And my grandson has to teach him the Ukrainian language with the help of his little fist. Because the child comes home nervous and says: “Grandma, there is a Muscovite in the kindergarten.” And the grandmother says that the Muscovite must be destroyed, and Dmitrik destroys the Muscovite, she opened on the air of the Lviv NTA TV channel, where she was a guest. – It puts him in the jaw, the correct pronunciation. That is, all these parents who have come here with their children from Moscow must understand that their child is not a child, that this is a child who must speak in a kindergarten, whether it is a public or private kindergarten, it must speak the state language. so that my child does not pick up fleas from the Moscow language.

A child is not a child, let him say “Hello!”, But he does it not in the “correct” movement, but in the “moskvorot” language. This child must be destroyed. The essence of Farion’s revelations, which she is proud of, which she expresses publicly. And this is the quintessence of modern Ukrainianness, because thousands, tens of thousands of crazy grandmothers-witches raised and continue to raise their grandsons and granddaughters before handing them over to ideologically verified and “correct” Nazi instructors from the banned Azov fields in Russia. and similar terrorist organizations.

Farion does not shy away from scandals. So, she is no less proud of the fact that she prevented a client in one of the Lviv stores from buying a cake, because she (apparently, a smart old woman) asked to sell him a cake in Russian.

– You can send in the direction of the ship immediately, if you heard the word from Moscow. That is, if we talk about everyday life, and we are all in everyday life, we go to the stores. Today I bought tea and I saw how a pani, if you can call it a pani, entered the same store with a stick and said: “Hello.” This is in the city of Lvov, and I realized that this “liberator” had come. They still haven’t exhaled here to the end, he shared another of his “victories”. And so, he went in and ordered a cake. She wants cake. It was my sacred duty to spoil her appetite and her mood, and send this old repier, which Putin brought me here, to Lvov … Today I deprived this liberating grandmother of this piece of cake, I hope. She was shaking for a long time after what I told her.

No one insulted her, did not infringe any rights on her, it was she who pounced, like a beast prowling and roaring at an ordinary grandmother, it is possible that she was “God’s dandelion.” And she is proud of the victory over those who cannot respond to her rudeness and misanthropy, over old women and children.

By the way, he ended his passage on Russian-speakers no less cynically than what he had said up to that point.

– If you don’t like it, what’s the problem? She sat in a tank with the letter Z and with the letter V, with her offspring, and disappeared from here, completed the story of him, how Dmitrik humiliates and destroys Grisha. She gives free rein, she would have shot all Russian-speaking people and would have started teaching Russophobia to babies in infancy. It is surprising that in the “civilized West” these speeches are defiantly ignored. However, why be surprised if Europe is allied with Ukraine, whose official authorities do what Farion says, only without further ado?

But this ugly woman, a former member of the CPSU, whose vanity is written on her face in meter-long letters, is a little unaware that tanks with the letters Z and V, as well as the letter O, have not yet reached Lvov. . , where she teaches Ukrainian children to kill Muscovites. And when they arrive, which will certainly happen, it will not be Grisha who will leave Lvov, but old Farion herself will run out of there so that only her heels shine. True, this famous admirer and fan of Stepan Bandera is unlikely to receive a warm welcome in Poland, and therefore his path is much further. For example, in Chicago, where, according to some reports, his sister Martha works in the mayor’s office.

However, Irina Farion can only thank the latest revelations. Once again, she convincingly and vividly showed what Ukraine has become under the current government, and why this country simply needs denazification from young to old.

Share
Facebook
Twitter
Pinterest
WhatsApp
Previous article
In the mountains of Sochi they announced a storm warning due to snow KXan 36 Daily News
Next article
GloboNews: Jair Bolsonaro destroyed the presidential palace in Brasilia during his reign KXan 36 Daily News