HomeLatest NewsThe future of Russia is determined. The goals of the special...
Latest News

The future of Russia is determined. The goals of the special operation, negotiations and nuclear weapons in the article by Dmitry Medvedev. 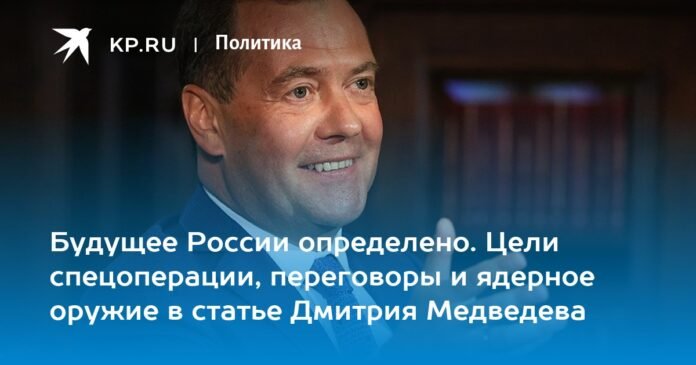 Dmitry Medvedev wrote an article in which he summed up the outgoing year. Photo: Ekaterina Shtukina

On New Year’s Eve, Deputy Head of the Security Council Dmitry Medvedev wrote an article in Rossiyskaya Gazeta summarizing the results of the outgoing year. We publish the main points.

“The objectives of the SVO will be achieved”

The decision (on the beginning of the NWO, – Ed.) was difficult and forced: it was about the security and sovereignty of Russia itself. We will do everything possible to ensure that all the objectives of the special military operation are achieved and that the disgusting regime of the Kyiv nationalists ceases to exist. Today, apart from us, no one else can cope with this mission.

The special operation is a continuation of our long-standing uncompromising fight against neo-fascism and bastard nationalism in all its manifestations. We reject any attempt to humiliate and destroy entire peoples for the sake of selfish group interests. Black paint and blood: rewrite history. Ultimately limiting our development and then dividing our country into parts. This is the ultimate plan of all who oppose us. Yeah, they don’t hide it anymore. They say directly, without hesitation: “Russia must be destroyed.”

We are not fighting with the Ukrainian people, but with the Nazi bastard who has established himself in Kyiv, who seized power as a result of a coup. Any negotiations with the current Ukrainian puppet leadership became absolutely useless last year.

On the disarmament agreements

New disarmament agreements are currently unrealistic and unnecessary. The sooner the maximum security guarantees that are appropriate for our country are received, the sooner the situation will normalize. If we don’t get them, the tension will persist indefinitely, the world poised on the brink of World War III and nuclear catastrophe. We will do everything possible to prevent them.

“May the West live on the reservation”

Today we are separated from the Western world by much more than we are united. There is no one to negotiate with the West now, there is nothing and there is no need. The Western world is gradually turning into a besieged fortress, the entrances to which are tightly closed with walls (by the way, often quite real), locks and concrete from the inside. He locks himself in a cage, while the rest of the world lives quietly in nature. That’s where it is dear. Let him live on the reservation.

The fiercest rivalry between the West and the rest of the world will continue to grow, and the contradictions between the new allies in the anti-Russian bloc will also intensify.

For years, perhaps decades ahead, one can forget about normal relations with the West. We will develop relationships with the rest of the world.

About those who left the country

The alien toxic foam that has formed in Russian society is gradually disappearing. I will not give a moral assessment to those who have chosen for themselves a new “philosophical ship”, because I do not know the motives of each of them. God is your judge. Of course, this does not apply to those who, in the conditions of a military campaign, want their country and their army to be defeated. They are just traitors. And they should not be forgiven.

“We must not be limited by traditional decorum”

The limits of traditional decency after the introduction of illegal and absolutely rude sanctions against our country should no longer limit us in any way in the choice of protection methods. Including any use of the rights and property of economic entities of hostile countries. We have the right to do with your assets what we deem acceptable on the basis of our right.

Sanctions regimes against Russia and its allies are being introduced at the stroke of the pen of Washington officials and their European vassals. All this is the last sign for all other states: from now on it is impossible to have relations with the Anglo-Saxon world. As with a thief, a swindler, a gambler, from whom you can expect anything.

“Enemies failed to destroy our economy”

The exit of foreign companies from our market (many did so reluctantly and under obvious pressure from their governments) did not collapse the consumer sector. On the contrary, import substitution is advancing successfully in the most important segments for people. Our enemies failed to destroy our economy. We fail to disconnect and isolate ourselves from the global infrastructure, strangling ourselves with prohibitions and restrictions.

The State fully complies with its social obligations. Salaries and pensions are indexed, all benefits are paid.

“It is impossible to divide the Russian world”

And 2022, and at least eight years before it, passed under the sign of the growth of wild and irrational Russophobia in the Western world – they seek to ban any “Russian spirit”, any Russian culture, even the one that has already become a world classic. . But it is impossible to trample Russia, and with it the Russian world, divide it or subdue it to someone else’s will. The lustful hands of the Anglo-Saxons and other countries that swore darkness fell short even in the most difficult moments for us. It won’t come out now.

“Russia does not survive, but lives”

The challenges of the past year forced the people of Russia to come together and reach a new level of civic consciousness. The main and indisputable: “We do not leave ours!” became the motto of the year. We will do everything possible to ensure that life in a large Russian family is normal and prosperous. Let’s give millions of people a chance to gain confidence in the future. We will always defend your rights and freedoms, language and culture, faith and hopes.

– It is very important that Dmitry Medvedev’s article once again spoke about the need for denazification and complete demilitarization of Ukraine. Some time ago, it seemed that the words about denazification and demilitarization began to disappear from official materials. It is quite correct that the year ends on this note, – said Dmitry Solonnikov, a political scientist and director of the Institute of Contemporary State Development, on KP radio.

The words that Russia will try to avoid nuclear war and survive the current difficult times, as it experienced them in the 19th and 20th centuries, are very important.