The government allowed Roskomnadzor to block content with LGBT propaganda 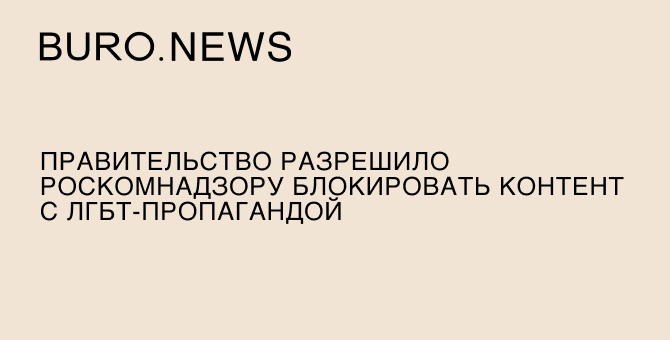 The government has included LGBT propaganda in the Roskomnadzor Unified Register of Prohibited Information. The decision appeared on the official Internet portal for legal information.

Roskomnadzor can now block pages or entire sites based on LGBT propaganda, pedophilia, or gender reassignment. The Agency will search for prohibited content and send information about the access restriction to the authorized bodies, which in turn can initiate a case.

The document refers to violations of the law that prohibits the promotion of “non-traditional sexual relationships and preferences” regardless of age. Vladimir Putin signed it on December 5. Such materials may not be placed in the media, the Internet, advertising, literature, movies and video games, as well as in the markets.

Recall that Vladimir Putin signed a law on a complete ban on LGBT propaganda in Russia in June of this year. It prohibits the promotion of non-traditional sexual relations, gender reassignment, pedophilia among Russians of all ages. We tried to figure it out ourselves, and at the same time we found out from the human rights activist and publicist Igor Kochetkov (recognized as a foreign agent in Russia. – BURO note.), What it is really about, what threat and what it prohibits. Read the link.