The head of the Central Bank gave the answer to “zero mortgage”. And he said that the Russians began to “eat up the stash” in the banks. 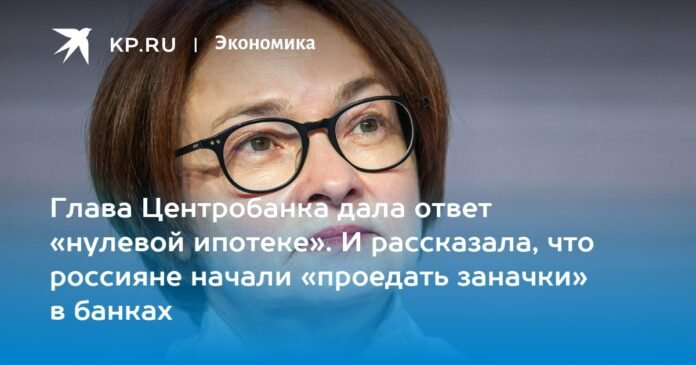 Immediately after the meeting, the head of the Central Bank, Elvira Nabiullina, held a traditional press conference, where she answered questions from journalists and bloggers. Photo: Sergey Bobylev / TASS

The Central Bank again did not change the key rate. Thus ended the last meeting of the Board of Directors of the Central Bank on monetary policy this year. The decision was predictable. The financial regulator took a break to see how decisions made this spring and summer will affect the economy. As explained by the Central Bank, changes in the key rate affect several indicators with a lag of 9 to 18 months. In addition, there are other factors to take into account.

Immediately after the meeting, the head of the Central Bank, Elvira Nabiullina, held a traditional press conference, where she answered questions from journalists and bloggers. We collect the most important quotes from the President of the Central Bank.

1. Why was the key rate not changed?

– The current rate of price growth is moderate and consumer demand is moderate. However, there have recently been signs of further pressure on prices. Among the pro-inflationary factors, I will highlight the increase in inflationary expectations, the shortage of labor in certain sectors, the restrictions on the supply side, the expansion of the budget deficit, as well as the deterioration of the terms of foreign trade, said Nabiullina. . .

The key rate is a tool that primarily affects price growth. The higher the rate, the more expensive money is in the country. Therefore, there are fewer people who want to borrow and more people who want to save. As a result, consumer demand is lower and companies don’t have the opportunity to raise prices “with impunity”. Now several factors are working to ensure that prices go up. For this reason, the Central Bank does not want to exaggerate with a rate cut. Otherwise, this can lead to an acceleration of inflation, and everything will have to start all over again. Let me remind you that the Central Bank’s long-term goal is to bring inflation to 4% per year. For comparison, based on this year’s results, the price increase will be around 12%.

2. What is happening to the savings of the Russians?

– The process of devaluation of bank balance sheets has continued in recent months, there is a change in the structure of the demand for money. Instead of foreign currency, rubles are increasingly being used for settlements, attracting investment and generating savings, the head of the Central Bank said during a press conference.

This is demonstrated by the latest statistics from the Central Bank. If on March 1 of this year, citizens had foreign currency on deposits in banks totaling 7.1 trillion rubles, by November 1 this figure had almost halved to 3.7 trillion rubles. rubles. The drop is due to several factors. First of all, with a decrease in the prices of the dollar, euro and other currencies. Compared to the beginning of the year, they fell by around 10-15%. Secondly, the Russians withdrew a decent part in cash, before the introduction of restrictions in March. Thirdly, part of the foreign exchange savings was withdrawn abroad or converted into rubles.

Thus, the share of foreign currency savings of Russians in banks was reduced to 10%. For comparison, in March and in the last five years it was around 20%. At the same time, the total amount in the accounts this year has not changed much. The Russians keep 37.5 trillion rubles in the banks. Such stability suggests that depositors began to gradually consume their reserve. In previous years, the volume of savings grew at a higher rate than inflation. That is, clients left the interest received in their accounts and, in addition, replenished deposits.

3. Why does the Central Bank want to prohibit “zero” mortgages?

The other day, President Vladimir Putin decided to extend preferential mortgage programs. These are “state-funded” and “family” mortgages. Their terms are slightly different. Somewhere for the better, and somewhere for the worse. In the first case, the rate will increase from 7 to 8% per year. This is a minus. But the advantage is that such a mortgage will remain in principle. The government wanted to abolish it entirely from January 1. In the second case, the rate will remain at 6% per year, and the program will even be expanded. Families with two children under 18 can now apply. Previously, the benefit was granted only to those who had at least one child, but not before January 1, 2018.

At the same time, even preferential programs could not support the market. The demand for new buildings fell almost three times. Therefore, the developers, together with the banks, began to figure out how to revive the market. For example, they came up with a “zero” mortgage. Its essence is that the borrower buys an apartment on credit, pays another 20-30% of the market price and takes a mortgage for the entire volume at 0.01% per annum. If he extends such a loan for 25-30 years, the real rate for the entire period will be about 3% per annum (which is beneficial). But the drawback of such a creative program is that the client pays interest for the first 5-12 years (depending on the borrower and other nuances) immediately. This is not always beneficial. Especially if a person has problems paying a loan and will be forced to sell an apartment.

– It will be a problem for people, a problem for the repayment of mortgage loans. There may even be cases when people still owe the bank when selling this housing, – said the head of the Central Bank.

According to her, those programs should be stopped. So, most likely, in the near future this tool will disappear. If you want to use it, you’d better hurry. But at the same time, she remembers: you only need to buy an apartment with a zero mortgage if you plan to live in it for a long time or rent it for an infinite time. Only in this case, such a deal will be 100% profitable.

How Russia will bypass the oil price ceiling (more)