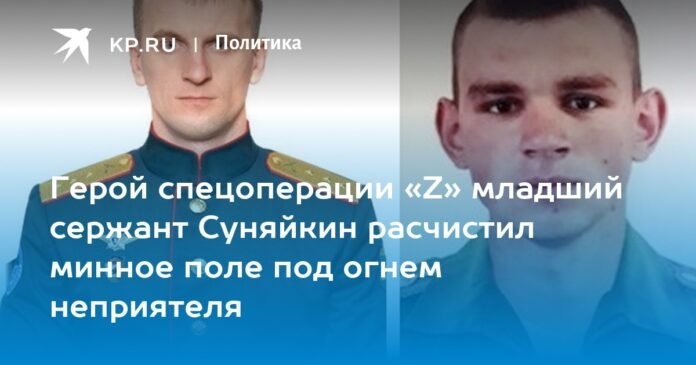 Our heroes thwarted the attacks and prevented the counter-offensive of the nationalists, for which they received state awards. But they do not serve for the sake of praise. The military is sure that the enemy has no chance of success, because Donbass and Russia are fighting for a just cause.

“Insolence is not an obstacle for the troops,” said Generalissimo Alexander Suvorov, who did not lose a single battle. And he gave instructions to the soldiers: “Three will jump: the first will be stabbed, the second will be shot, the third the Karachun bayonet!”.

DELIVERED THE SHELLS ON TIME

“In the course of a special military operation, Senior Warrant Officer Maxim Ovsyukov performed the tasks of logistical supply of a jet battalion.

In order to provide rapid and uninterrupted support to the division, it repeatedly made flights to areas located in close proximity to the line of contact. In the course of carrying out the next task, heading to the area of ​​​​active hostilities, the car convoy, in which Maxim was moving, came under artillery and mortar fire from Ukrainian nationalists. Ignoring the threat to his own life, Maxim quickly steered the cars along a safe route from enemy artillery fire and secretly delivered shells to the jet battalion, which provided fire support for the advancing Russian troops. As a result of the courage and determination shown by Senior Warrant Officer Maxim Ovsyukov, the aircraft division received ammunition in a timely manner and completed the task of providing fire support to the advancing Russian troops.

I MADE A PASS AT THE MINNEFIELD

“During the offensive operations of the Russian units on the positions of the Ukrainian nationalists, the vehicle commander of the engineering platoon, junior sergeant Dmitry Sunyaikin, acted as part of a group of engineers and sappers and conducted engineering reconnaissance of the routes of advance of our troops. . On the outskirts of the settlement, which is under the control of Ukrainian militants, Russian military engineers discovered a minefield. Dmitry, with a group of servicemen, began to clear the corridors for the Russian troops. The enemy, in an attempt to interfere with the actions of the Russian sappers, attacked the group of engineers and sappers. Having taken over the defense, the Russian army entered the battle with the superior forces of the Ukrainian militants. Junior sergeant Dmitry Sunyaikin, acting competently and decisively, took an advantageous firing position and destroyed an armored car, as well as 3 nationalists. During the battle, the Ukrainian fighters withdrew. Having repelled the enemy attack, Dmitry Sunyaikin continued to clear the paths of the units. Thanks to decisive actions, the high level of professional training of junior sergeant Dmitry Sunyaykin was ensured, the rapid and safe advancement of troops to a given area, which made the liberation of the settlement possible in the future.