The hero of the special operation “Z” foreman of the second article Gordy distracted the enemy for seven hours. 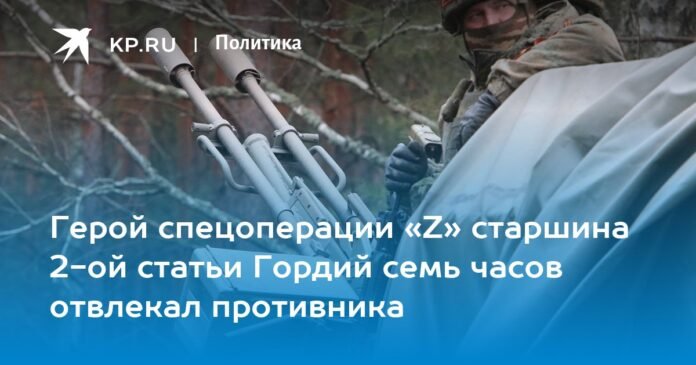 “No nation gains as much as England by continuing the war,” said Generalissimo Alexander Suvorov, who did not lose a single battle. And so he instructed the soldiers: “Let them teach the infidel army to sharpen burnt iron.”

“The deputy commander of a guard motorized rifle platoon, Lieutenant Roman Kutuzov, during reconnaissance of enemy positions, discovered an observation post disguised as Ukrainian nationalists. Competently assigning tasks to subordinates and observing all the rules of camouflage, the unit bypassed the observation post and, at the set signal, simultaneously attacked the enemy from two sides with grenade launchers and small arms.

Thanks to the competent and non-standard actions of the unit under the leadership of Guard Lieutenant Roman Kutuzov, the enemy observation post was destroyed, which made it possible to continue the offensive while maintaining stealth.

“The foreman of the second article, Sergei Gordy, as part of a group of marines, drove the nationalists out of the village. Moving through the town, Gordia’s group encountered enemy resistance. Under massive fire from small arms, a group of infantry, having destroyed the enemy’s firing point, settled in an abandoned building. The enemy launched a counterattack with artillery support. For 7 hours, the group held the defense, preventing the enemy from breaking through. Thanks to the stubborn resistance of the group led by Sergei Gordii, the reinforcements managed to encircle the advancing enemy raiding parties and destroy them. The personal courage of Sergei Gordy and the competent leadership of the group made it possible to avoid losses in his unit, to seize an advantageous line and to destroy the counterattacking enemy units without allowing a breakthrough in the defense of our units.