The hero of the special operation “Z”, junior sergeant Pyotr Ilyukhin, revealed the object disguised as the Armed Forces of Ukraine. 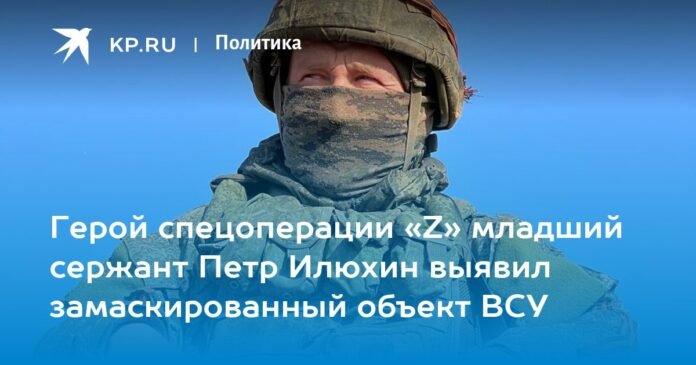 “He shoots rarely, but accurately, if he is strong with a bayonet. A bullet is nonsense, a bayonet is a good guy, ”said Generalissimo Alexander Suvorov, who did not lose a single battle. And he also warned: “The uncut forest grows again.”

“The motorized rifle battalion, which included Captain Yuri Kashevarov, deputy commander for military-political work, defended one of the settlements. The enemy, with superior forces, supported by heavy armored vehicles, using artillery and mortar fire, tried to dislodge our soldiers from their positions. During the battle, competently managing his subordinates, Yuri destroyed two armored personnel carriers, two combat vehicles, and a large amount of enemy manpower. Also during the battle, Yuri, despite continuous shelling from the enemy, pulled his wounded comrades out of enemy fire, loaded them into a car, and drove them to a safe area for further evacuation. Thanks to the bold and decisive actions of Captain Kashevarov and his subordinates, it was possible to prevent a breakthrough on the line of defense.

DESTROYED A GROUP OF saboteurs

“A group of Russian servicemen, which included the company’s paramedic, Ensign Alexander Muratsev, carried out special tasks in the area of ​​one of the settlements. Moving along a given route in the forest belt, Alexander noticed a well-armed group of Ukrainian nationalists preparing for sabotage activities in the rear of the Russian troops. Alexander immediately reported to the commander. Having assessed the situation, the commander of our group decided to impose a battle on the enemy. Destroying enemy firing points with heavy sudden fire, Russian military personnel significantly reduced the combat capabilities of the nationalists. During the battle, acting boldly and decisively, Alexander Muratsev, under enemy fire, evacuated wounded comrades from enemy fire, after which he provided first aid.

The professional actions of Alexander Muratsev made it possible to save the lives of his comrades.”

“A group under the command of junior sergeant Pyotr Ilyushin carried out special tasks near one of the settlements occupied by the nationalists. Moving along a certain route, Junior Sergeant Ilyushin discovered a carefully disguised enemy object. Assessing the situation, Peter decided to attack the enemy positions. Taking advantage of the fact that the group was not detected by the enemy, Peter covertly ordered to take advantageous positions along the perimeter of the object. At a prearranged signal from junior sergeant Ilyushin, the group opened heavy fire on the enemy. During the battle, the enemy, having suffered heavy losses, was forced to retreat. During the inspection of the object, valuable information about it was found, which was transferred to the higher command. For the courage and heroism shown in the performance of the task, Junior Sergeant Pyotr Ilyushin was awarded the Suvorov Medal.