The hero of the special operation “Z”, Private Zakharov, thwarted the enemy offensive with accurate fire. 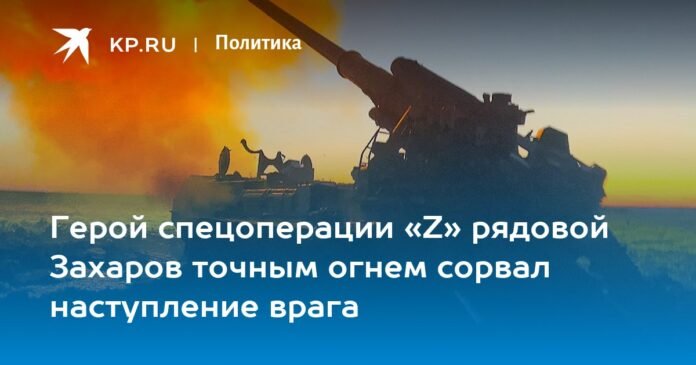 We continue to acquaint you with the heroes of the special operation “Z” – participants in the hostilities in the Donbass.

“The more comforts, the less courage,” said Generalissimo Alexander Suvorov, who did not lose a single battle. He also taught: “Speed ​​is needed, but haste is harmful.”

“The commander of the motorized rifle battalion, Captain Maxim Volchek, together with subordinate personnel, carried out a combat mission to defend one of the liberated settlements from the armed formations of Ukrainian nationalists. Maxim’s professionalism and courage made it possible to competently build defensive lines, which made it possible to contain the attacks of superior militant forces.

Time and again, the militants tried to return the settlement under their control, using artillery and heavy equipment. During one of the artillery attacks on our positions, Maxim Volchek received a severe concussion, but decided to remain in charge of his battalion until the situation in the entrusted defense sector stabilizes. For three days the enemy attacked our positions to no avail. All this time, Captain Volchek continued to lead the defense of the lines on the outskirts of the settlement, repelling all enemy attempts to break into the village. Thanks to the competent, skillful and selfless actions of Captain Volchka and the battalion subordinate to him, it was possible to repel all enemy attacks and prevent the capture of the settlement.

“Recently called up from the reserve as part of a partial mobilization, private Vasily Zakharov performed the task of filling positions in the company. Ukrainian nationalists, trying to break through the defenses of our troops, attempted an offensive in the zone of responsibility of the platoon in which Vasily acted. Despite vastly superior forces, the enemy faced a decisive repulse. Acting bravely and heroically, Vasily blocked the actions of the nationalists with directed fire from a grenade launcher, causing great damage to his manpower, thus slowing down the offensive. The enemy, trying to suppress Vasily’s firing point, opened artillery fire on him. Despite his serious injuries, Vasily managed to get out of the enemy shelling and evacuate his wounded comrades to a safe place. Once outside the shelling zone, Vasily provided medical assistance to the evacuated wounded, which saved their lives. The bold and decisive actions, as well as the accurate shots of the soldier Zakharov, made it possible to thwart the attack of the militants. The Russian military launched a counter-offensive and captured 6 Ukrainian nationalists, who, during interrogation, gave valuable information about the enemy’s DRG operating in the area.”

Ruslan Tsalikov, First Deputy Minister of Defense of the Russian Federation, fulfilled the New Year’s dream of a schoolgirl from the Moscow region as part of the New Year’s Wish Tree charity event.

On the eve of the New Year holidays, Tsalikov took out a children’s postcard from the Christmas tree, decorated with letters with children’s New Year wishes. In it, the girl Anna asked to give her father, who is now in the zone of the special military operation, homemade jam and woolen socks knitted with her own hands.

And a New Year’s miracle happened: a New Year’s package with homemade gifts was delivered on time to the front line and delivered to Anna’s father. And they also gave the soldier video New Year’s greetings recorded by his family. He was also able to communicate with his daughter and his wife by phone.

The all-Russian charity event “Christmas Tree of Wishes” is held in military units and military garrisons in different regions of the country. Commanders, chiefs, officers and family members of the military participate in the Tree of Wishes. Other deputies of the Minister of Defense of the Russian Federation also took part in the charity event. All children’s wishes will be fulfilled during the New Year holidays.