The hero of the special operation “Z”, Senior Lieutenant Maslyansky, hit the nationalists of the air defense system. 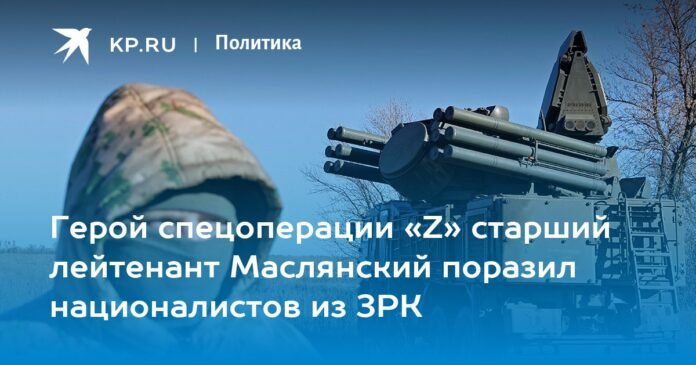 We continue to acquaint you with the heroes of the special operation “Z” – participants in the hostilities in the Donbass.

“A good name belongs to every honest person, but I concluded a good name in the glory of my fatherland, and all my actions were aimed at its prosperity,” said Generalissimo Alexander Suvorov, who did not lose a single battle. And he taught warriors to pay attention to even the little things: “Great adventures come from little causes”!

“A group under the command of Senior Guard Lieutenant Amir Shakhbanov received a combat mission to strengthen the positions of Russian troops near one of the water barriers in order to prevent the enemy’s DRG from landing in a certain area. Having assessed the situation, Amir secretly, in difficult weather conditions, despite regular shelling by the nationalists, quickly organized the equipping of positions with engineering means by the forces of his subordinates. The militants, seeking to regain control of the lost territories, tried to land on the coast controlled by our troops. The engineering structures of the Guard, installed by Senior Lieutenant Shakhbanov and his subordinates, did not allow the militants to gain a foothold on the coast and rapidly advance towards our borders. By slowing down the rate of advance, the Nationalists found themselves in the zone of destruction of our artillery and were destroyed.

“Anti-aircraft missile system (SAM) under the leadership of Senior Lieutenant Vladislav Maslyansky, being in a carefully camouflaged position, destroyed enemy air strike means during an offensive attempt by Ukrainian militants. As soon as the enemy drone was over the calculation area in the range zone of the air defense, Maslyansky launched missiles and destroyed the drone of the Ukrainian nationalists. After that, the calculation of the air defense system quickly left the area so as not to fall under artillery fire. Changing position, Maslyansky noticed the mortar position of the nationalists, from where the enemy was preparing to open fire. Instantly oriented to the situation, Maslyansky made a non-standard decision: he launched a direct-fire anti-aircraft guided missile at a ground target. The missile successfully hit the enemy in position, which made it possible to save the lives of crew personnel and prevent the incapacitation of weapons and military equipment. During the fighting in this area, the anti-aircraft missile crew of Senior Lieutenant Vladislav Maslyansky shot down five enemy drones.