The hero of the special operation “Z”, Sergeant Bazarzhapov, covered the retreat of his comrades like a sniper. 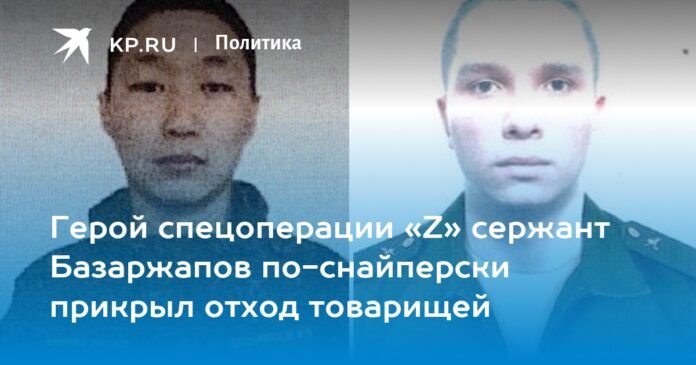 “You are going to defeat the enemy: multiply the troops, empty the posts, eliminate communications. Having beaten the enemy, renew according to the circumstances, but drive him to crush him, ”Generalissimo Alexander Suvorov taught, who did not lose a single battle. And he repeated: “The uncut forest grows again.”

“In the course of a march in the area of ​​​​one of the settlements, a column of Russian troops, in which the soldier Konstantin Golubev was moving, was attacked with mortars and small arms by a sabotage and reconnaissance group of nationalists. Russian military personnel began to repel the attack. Despite the incessant shelling of the enemy, acting as part of the calculation of the combat vehicle, the soldier Konstantin Golubev, executing an order to attack the enemy forces by fire, destroyed 3 units of the enemy’s special equipment, as well as 2 long term. enemy firing points. Thanks to the united, well-coordinated and practiced actions of the calculation, which included Konstantin Golubev, the positions of the nationalists were suppressed, which allowed the column to continue to move and reach a certain area in a timely manner.

THE SNIPER COVER THE WALK

“A group of Russian military, which included Sergeant Zhalsan Bazarzhapov, carried out tasks to detect the positions of nationalists in a certain area. Moving along the forest belt, the Russian military discovered an armed group of Ukrainian militants. A fight ensued. Zhalsan was one of the first to open fire on the militants who were setting up a firing point and destroyed a machine gun crew. The enemy, who had a numerical superiority, tried to encircle the Russian military. The group commander decided to withdraw towards the reinforcements that were advancing towards ours. Sergeant Bazarzhapov was given the task of covering the group’s withdrawal. Carrying out aimed fire from small arms, Bazarzhapov, with accurate fire and skillful movements on the battlefield, destroyed a machine-gun crew in a van, and also wounded three other nationalists, thereby suppressing the actions of the militants and slowing down of his offense. Leaving for his own, Zhalsan continued to destroy his pursuers. Bazarzhapov’s bold and professional actions allowed two Russian groups to build defenses and, having waited for the militants, destroy them. Thanks to the courage and selfless actions of Zhalsan Bazarzhapov, the activities of the sabotage and reconnaissance group in the given area were stopped.”