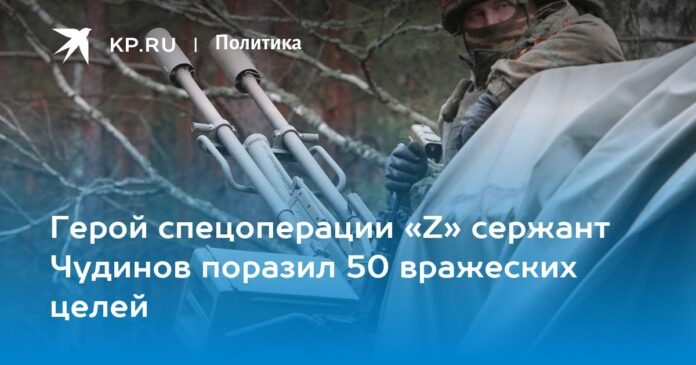 “For a Russian soldier, the way home is through Ishmael. There is no other way for a Russian soldier to leave here!” said Generalissimo Alexander Suvorov, who did not lose a single battle. And he instructed the soldiers like this: “Pray to God, victory comes from Him. God is our general, He guides us.”

“The unit, which included private Alexander Mandazhi, carried out tasks to maintain the defense in one of the tactical directions. Advancing, the Ukrainian nationalists, trying to break through the defensive lines of the Russian troops, fired artillery and mortars at our positions. Acting as part of a multiple launch rocket system combat vehicle crew, Alexander suppressed enemy artillery positions with accurate fire, while destroying five enemy equipment and a large amount of manpower. The competent and professional actions of the soldier Alexander Mandazhi significantly reduced the combat capabilities of the enemy and contributed to the retention of strategically important positions.

“Sergeant Kirill Chudinov, acting as part of a howitzer artillery battery, carried out firing missions to destroy enemy targets during the offensive operations of Russian troops. Cyril’s units operated in the face of fierce enemy resistance, which used cannon and rocket artillery, as well as unmanned attack vehicles. In the course of a special military operation in conditions of systematic enemy fire, Sergeant Kirill Chudinov, as part of the weapons team, carried out more than 50 fire missions. As a result of the directed fire, a battery of enemy multiple launch rocket systems, howitzer firing positions, mortars, and a large amount of enemy manpower were destroyed. The greatest professionalism and dedication of Sergeant Kirill Chudinov made it possible to inflict significant losses on the Ukrainian nationalists and drive them from their posts.

A scientific conference dedicated to improving methods of rehabilitation assistance to wounded soldiers.

The hospital successfully uses many therapeutic and rehabilitation areas, such as exercise therapy, more than 30 types of physiotherapy, kinesiotherapy, traditional therapy, hydrotherapy and much more. All these instructions were demonstrated to the conference participants.

Speaking with a report, the head of the branch, Honorable Doctor of the Russian Federation, Doctor of Medical Sciences, Professor Vladimir Yudin noted the importance of the task of restoring those who suffered combat injuries: “The return to service of military personnel with combat wounded is one of the most important tasks of the troop medical support system”.

The head of the branch also noted that full rehabilitation cannot be limited only to medical methods: “The necessary assistance is provided to all victims in a comprehensive manner. This includes sanatorium and spa recovery, psychological support, a series of measures for socialization and adaptation to new living conditions”.

Share
Facebook
Twitter
Pinterest
WhatsApp
Previous article
… And Nikishin did not help! CSKA beat SKA in Saint Petersburg
Next article
Global Times: By Supplying Ukraine With Arms, The US Is Trying To Weaken Russia And Europe KXan 36 Daily News