The hero of the special operation “Z”, Sergeant Khabiev, evacuated the wounded under fire. 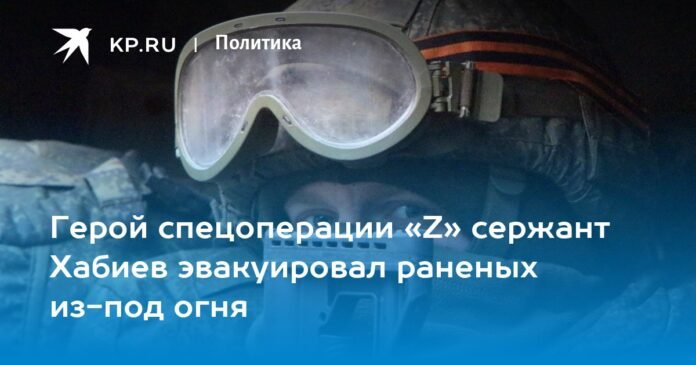 “He who is brave is alive. Whoever dares is safe!” said Generalissimo Alexander Suvorov, who never lost a single battle. And he taught warriors to predict events: “Great adventures begin from small reasons.”

REDEPLOY THE ANTENNA IN BATTLE

“Senior Guard Lieutenant Angarikov Naran, during the period of a special military operation in conditions of systematic fire impact, carried out combat missions to organize uninterrupted communications in the interests of a battalion tactical group of the Russian Armed Forces. In a battle with armed formations of Ukrainian nationalists, as a result of an enemy artillery salvo, the relay points of radio stations were disabled, and the antenna mounts were damaged, which led to the wrecking of it. Having assessed the situation in a timely manner, understanding that loss of communication would deprive command of control of subordinate units, Naran, as part of a group under relentless enemy artillery and mortar fire, moved forward to repair the damage.

Having restored the functionality of the overturned antenna, he redeployed it, after which he installed the station, which ensured control of the subordinate units and communication of the command with the higher headquarters. Thanks to the courageous and decisive actions of Senior Lieutenant Angarikov Naran, it was possible to quickly transfer to the artillery crews the coordinates of the location of the nationalists’ artillery and mortar positions, which contributed to the destruction of their military equipment and a large number of manpower.

HE RESTORED THE BRIDGE AND CLEARED THE CROSSING

“Sergeant Major Kostin, during a special military operation, carried out the tasks of evacuation, restoration and repair of engineering equipment of an engineer regiment. Ukrainian nationalists, trying to disrupt the forcing of the reservoir by Russian units, opened artillery fire on a heavy mechanized bridge built by military engineers. During the artillery shelling of the militants, one of the bridge nodes was damaged. Under incessant artillery fire, Senior Sergeant Vladimir Kostin dismantled and replaced the damaged unit, which made it possible to maintain the bridge’s operation and overcome the water barrier. Also, Senior Sergeant Kostin, as part of the unit, performed the tasks of neutralizing mine-explosive devices installed by the enemy in the ground, skillfully controlled the combat vehicle when driving through anti-personnel minefields. The courage, bravery and professional skills of Senior Sergeant Vladimir Kostin ensured the safe advance of our troops.”

EVACUATES OF INJURED FROM FIRE

“Sergeant Khabib Khabiev, acting as part of an artillery platoon, carried out the tasks of destroying enemy targets with fire while our troops advanced deep into the defenses of Ukrainian nationalists. The enemy put up a fierce resistance, using cannon and rocket artillery. Khabiyev, being in the zone of destruction of enemy artillery, risking his life, took out the wounded comrades from the shelling and organized their evacuation. Having sent the wounded to a safe place, Khabiev continued to carry out the task of adjusting fire on enemy targets. As a result of accurate and timely data transmitted by Sergeant Khabib Khabiev, the enemy, having suffered significant losses in weapons, was unable to contain the offensive of the Russian troops and withdrew.

Share
Facebook
Twitter
Pinterest
WhatsApp
Previous article
Nezuko is ready to celebrate Christmas with this cute Kimetsu no Yaiba cosplay.
Next article
Vlad Kadoni confirmed that he would become the host of the analog program “Let them talk” on TV-3 KXan 36 Daily News