The King demands “continuous support” for families to face inflation 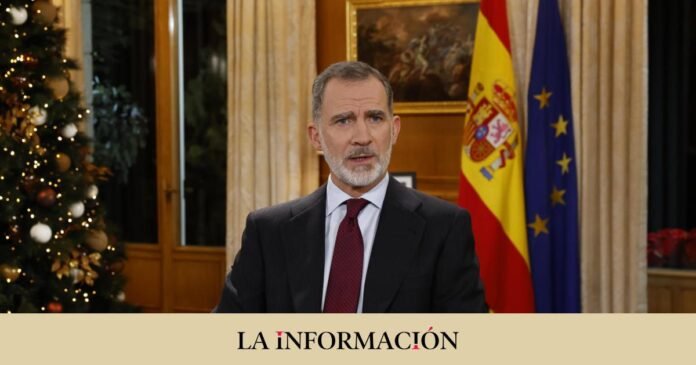 King Felipe VI has taken advantage of his Christmas message to launch an alert about the “continuous support” needed in Spain by households and families most vulnerable to the effects of inflation and the escalation of prices, especially of food. In a long-awaited message given the moment of institutional crisis that lives the politics of our country, Felipe VI wanted to remember first the unsafety in which many households live, who have to face daily tasks, such as turning on the heating, the light or filling the gasoline tank, with important personal sacrifices. “There are families that cannot face this situation in a prolonged way and need the continuous support of the public powers to alleviate its economic and social effects,” the monarch has forcefully claimed. After echoing the suffering that the people are enduring months later of the invasion of Russia, the King has announced the serious consequences that the conflict has over the economy, especially in the face of an energy crisis with a serious impact on industry, commerce and transport, as well as on family economies. “The whole new scenario that we are experiencing – the war, the economic and social situation, the instability and tensions in international relations – is logically causing great concern and uncertainty in our society. But we cannot renounce that things can change and improve,” he said. To achieve this improvement, her majesty reiterated that the first thing we must have is confidence in ourselvesafter four decades of modernization and transformation, always endorsed by the Constitution, on which values ​​did you want to launch a remark trust messageFaced with the three great risks that, in his opinion, modern democracies currently face, among which the Spanish one “is not an exception”: the division of the country, the deterioration of coexistence and the erosion of institutions. VI I wanted to stop and fully enter into the analysis of those three threats, without mentioning cases, names or specific situations, as is logical, but very clearly when warning that “a country or a society divided or in conflict does not advance, it does not progress or solve its problems well, it does not generate confidence. The division makes them more fragile to democracies; the union, on the contrary, strengthens them”. And the greatest demonstration of that assertion is, in the monarch’s opinion, the very Constitutionthat he already knew how to unite all Spaniards in the Transition and his values ​​”are rooted in our society; and for this reason they are the reference where we Spaniards must continue to find the union that ensures stability, cohesion and progress”. trial of Felipe VI, the basis of coexistence and respect to people, to convention already you dignity, which “needs to be guided by reason” and which “demands to put the will to integrate before the desire to suppress”. That clear message, when understanding that the King has launched this year, also contemplates the need to strengthen the institutions, so that they “protect citizens, attend to their concerns, guarantee their rights, and reinforce families and young people in overcoming youth. many of their daily problems. In full controversy in Spain for the confrontation between parliament and the judiciary and all the problems that this can generate, the King has been very explicit when pointing out that, “at this time, we should all exercise responsibility and reflect constructively on the consequences that ignoring these risks may have for our union coexistence and our institutions”. Together with democracy and the Constitution, understood as “the place where the Spaniards we recognize and accept each other each other despite our differences”, the King highlighted in his message this year the value that belonging to Europe has in all this process and in the future of our country. Both in the face of the economic problems that have arisen in Today, we share many of his problems and we contribute to their decisions with our own personality and our interests,” Felipe VI explained this Saturday. the European Union”, he remarked. “For this reason, what is decided every day in the Union affects –and a lot– the daily life of all the Spaniards. Thats the reality. We are Europe, but we also need Europe, which is our great political, economic and social frame of reference and which, therefore, offers us certainty and security. I am sure that Spain’s commitment will be reinforced with the rotating Presidency of the Union that it will assume next year”.