HomeLatest NewsThe largest car plant in the Urals will increase production by another...
Latest News 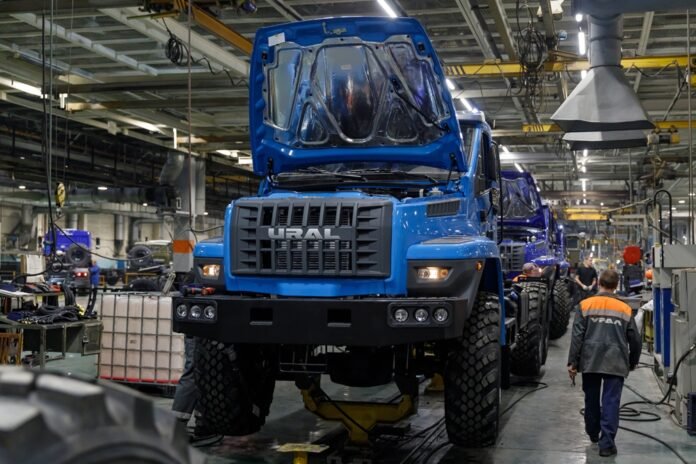 Behind the giant plant fence that spans the entire city, renovation is already underway. Heavy machinery and construction crews dismantle communications and demolish old workshops and administrative buildings. Wartime buildings that have exhausted their resources will be replaced by light and spacious prefab workshops equipped with automated and robotic equipment, equipment and modern tools. This year, a record amount for the last decade was invested in the renovation and development of the automobile plant – 3.3 billion rubles.

In December, the company inaugurated the largest logistics center with an area of ​​more than 10,000 square meters, designed to ship more than 90 percent of the range of all spare parts for Ural vehicles. Its construction was due to a threefold increase in demand for original spare parts after the launch of the shop.uralaz.ru online store and the formation of a partner network of dealers and service centers. By the way, the number of such Ural centers has increased to 200. And in order to train its staff, the plant has built a new functional workshop for maintenance and repair service, even opening a new specialized car wash.

In addition, a new test site for pilot equipment models and a full-cycle workshop for the manufacture of dump trucks and van bodies for buses on duty appeared in the company. In the new year, it is planned to equip the workshop with robotic equipment, as well as start construction of a new building for the assembly of special vehicles.

The line is expanding

At the same time, the development of a new family of “Urals” and the promotion of promising basic models of trucks, both bonnet and cabover, are launched on the market. At the International Exhibition Forum in Kubinka, the Miass Automobile Plant presented several innovative developments at once: a unique line of vehicles for the Arctic, allowing people and goods to be transported in off-road conditions and extremely low temperatures, the first electric truck equipped with a hybrid power plant, as well as a model of a cargo drone developed jointly with Magnitogorsk NPO “Android Technology”. Such an “autodrone” without a cabin and a driver is endowed with artificial intelligence and can be used at closed production sites in conditions that are dangerous for people. And the electric car is considered a promising model of a garbage truck that can remove MSW from containers at night almost silently and not disturb the sleep of residents. By the way, the attention of specialists was also attracted by a two-axle vehicle, which is the lightest in the Ural range of trucks, reminiscent of the famous GAZ-66 in terms of characteristics.

The largest project will be the production of axles and axles for heavy vehicles, which are currently being purchased in China.

In December, the auto plant received an 18 million grant from the Industrial Development Fund (IDF) to reimburse the costs of creating a line of heavy-duty non-wheel drive vehicles on the C26 and C33 (Ural RWD) platforms. This project helped diversify the range of all-terrain vehicles and expand the market presence.

“The plant is faced with the task of occupying a niche that became vacant after the departure of European brands and providing the market with modern, comfortable and productive cars,” explains Sergey Buzin, responsible for the key project. – It is supposed to change the external appearance, as well as the introduction of modern solutions inside the cabin. We use the grant from the fund to further improve the styling of trucks and refine design solutions.

To eliminate technological risks in mass production, the company is implementing a comprehensive import substitution program. Its biggest project will be the organization of its own production of drive axles and front axles for heavy-duty vehicles, which are currently mainly purchased in China. To deploy new capabilities that will help achieve independence from foreign components, the company received two soft loans from the IDF in the amount of seven billion rubles.

The sharply increased production rates required changes in the company’s personnel and social policy. Unprecedented recruitment announcement. The auto plant is ready to employ more than 500 specialists, as the company has already received orders for more than a five-year period ahead. Particular attention is paid to the continuous improvement of working conditions and the increase in wages. Since the beginning of the year, staff income has grown by 26 percent, the average salary at the company has reached 68,300 rubles, and workers’ salaries have reached 69,320 rubles. The social package has also been increased: in order to attract staff from other cities, such support measures as compensation for renting housing, intercity travel expenses have appeared, and the housing program has been significantly expanded.

Together with the Miass Engineering College, the implementation of the “Professionalism” project began. For the first time, students were able to find factory jobs with full pay and free meals. The educational institution even made adjustments to the educational program: theoretical training will be significantly supplemented by practical – these components of the educational process will take place in one complex, which will improve the quality of training and a quick career start for future specialists. .

Thus, the automobile factory enters 2023 with a verified strategy, greater production capacity and qualified personnel, summarized in the company.