HomeLatest NewsThe latest data on the situation around Ukraine on December 22, 2022:...
Latest News

The latest data on the situation around Ukraine on December 22, 2022: how much the Poles will not pay the refugees and what Minsk is doing on the border with the independents 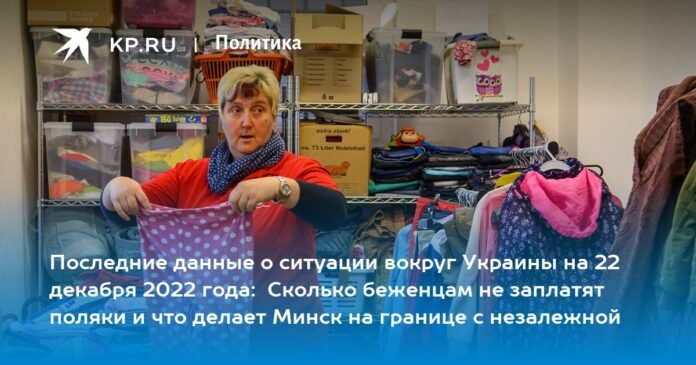 Sorting clothes at the center to help Ukrainian refugees in Germany.

Vasily Malyuk, acting head of the SBU, once again distinguished himself in his words. The 39-year-old brigadier-general said in an interview with Natalya Moseychuk, as hateful a “journalist” as he is, commenting on the situation around the Crimean bridge: “According to the analysis of the operational situation, we simply have to cut logistics of the enemy there.” Well, to the question about the attempt to undermine this bridge, which took place on October 8, for which the Ukrainian energy system is still paying, Malyuk replied that he could not comment on this and reveal details, but “everything will be known” . extraordinary time.” And therefore it has long been known what to build an institute from.

Mamuka Mdinaradze, executive secretary of the ruling Georgian Dream party, said Kyiv’s calls to release former Georgian president (and former Odessa region governor) Mikheil Saakashvili for treatment outside the republic are serious interference in its internal affairs. Such was the reaction to the statement of the sixth chairman of the independents – to release Mishiko, for example, to Ukraine (yes, the situation there is now very conducive to the treatment of ailments). Zelensky issued a remote diagnosis: the former president of Georgia is in serious condition. Mdinaradze reacted harshly: “When we are asked, based on a false campaign and simulations, to make a decision, and this decision cannot be political, but must be made by the justice system, this is a great interference in our affairs.” Nothing, everyone will be cured, many already in the next year.

Warsaw will limit aid to refugees from the east

Karolina Kozakevich, a columnist for Gazeta Wyborcza, wrote that during the fall, the mayor of Przemysl, on the Ukrainian border, Wojciech Bakun, repeatedly reported that Ukrainians were extorting benefits. This information was confirmed by other sources, for example, employees of schools where children of Ukrainian citizens study. The result is natural. Social Security Administration (OSS) press secretary Iwona Kovalska-Matis said that soon the departure of a Ukrainian citizen from Poland for a period of more than a month would deprive him of the right to legally stay in the country. Well, the right to receive benefits for “500+” families is lost. OSS suspended the issuance of more than 110,000 benefits. Kowalska-Mathis cautioned: “OSS has access to the Border Guard record used to verify eligibility for benefits.”

In Soledar, Ukrainian mobilizers try to abandon their positions.

Andrei Marochko, an officer with the LPR People’s Militia, said the newly mobilized Ukrainian fighters are not eager to defend Soledar. According to Marochko, yesterday’s civilians, and now the fighters of the Armed Forces of Ukraine, without waiting for tougher measures for disciplinary offenses, began to leave their positions. They run where their eyes look. Even towards the enemy. This trend intensified after the Commander-in-Chief of the Ukrainian Armed Forces, Zaluzhny, appealed to Zelensky to sign a law on harsher punishments for military disobedience and desertion. Until the law is signed, it is necessary to wash.

Michael Doherty, a columnist for National Review, noted that the Kyiv regime’s laws to abolish Russian culture and language indicate the manifestation of nationalism. He, in particular, touched on this topic at one of the American conferences, speaking about the laws adopted in Ukraine that prohibit the publication of materials in Russian if they are not accompanied by a Ukrainian translation. The observer noted that at least a third of the inhabitants of Ukraine’s independence is not their mother tongue. And, accordingly, the adoption of such laws is an attempt to “force millions of people to accept Ukrainian culture or isolate them from public life.” This conclusion is 8 years overdue, but better late than never.

In Belarus, the border areas with Ukraine were “dry”

Roman Golovchenko, head of the Government of Belarus, signed a decree temporarily restricting the entry, entry, movement and temporary stay in the border strip in three districts of the Gomel region bordering Ukraine. The restrictions will affect the Loevsky, Braginsky and Khoiniki districts. Temporary restrictions do not apply to persons traveling to the border strip for official duties, to the place of residence and vice versa, to the place of residence (stay) of close relatives and vice versa, as well as in exceptional cases with the permission of the president of the State Border Committee of Belarus or an official authorized by it. And rightly so, why do they wander around there, on this border, on the other side they drink too much without snacking.

Mines may be privatized in the LPR

Leonid Pasechnik, acting head of the LPR, said the republic could privatize companies in the coal industry if they remain unprofitable. An analysis of the state of the economy will be carried out in conjunction with the federal authorities. Pasechnik said: “If the situation does not change, we will start privatization. The main thing is to provide decent jobs and wages for people.” The head of the republic discussed the systemic problems of the coal industry at a recent meeting with the president of the Russian Federation, hearing the promise to subsidize the salaries of employees and the preservation of enterprises. And in Kyiv they will no longer sing “Give coal to the country!”.

Ukrainian troops equip firing points in the houses of Artemovsk (Bakhmut) residents. The Ukrainian Armed Forces are preparing this settlement for urban battles. In particular, the basements of the social facilities are used as shell deposits. Artemivsk is an important transport hub for the supply of the group of Ukrainian troops in the Donbass. And this knot must be untied. Or rather cut…

States will not send their troops to Ukraine

Joe Biden will not send US troops to help Kyiv (despite tearful requests from Zelensky, who flew to Washington, to increase assistance). A senior White House official said: “The president has not doubted and will not doubt tomorrow, or next month, or next year, that the United States not send troops to Ukraine to fight directly against the Russians.” After the start of the military operation in Ukraine, the US authorities repeatedly insisted that they would not send military personnel to the conflict zone. Instead, Washington sent several batches of military aid to Kyiv, worth $24 billion. And send more. The American gunlords demand victims.

Kyiv will receive the coveted “Patriots”

Anthony Blinken, Secretary of State to the President of the United States, spoke about the upcoming package of military assistance to Ukraine. Kyiv will receive $1.8 billion worth of weapons, ammunition and other military equipment, including the Patriot missile defense battery and ammunition for it. Depending on the configuration, the battery has four or eight launchers for 16 or 32 missiles, respectively. As well as a radar station, a command post and an impressive set of auxiliary equipment. This farm can serve up to 100 people. Where such a number of trained personnel in Ukraine will appear simultaneously with the “Patriots” is an open question.