HomeLatest NewsThe latest news about the situation around Ukraine on December 28, 2022:...
Latest News

The latest news about the situation around Ukraine on December 28, 2022: the monstrous losses of the Armed Forces of Ukraine are revealed, Lavrov predicted the future of the independents 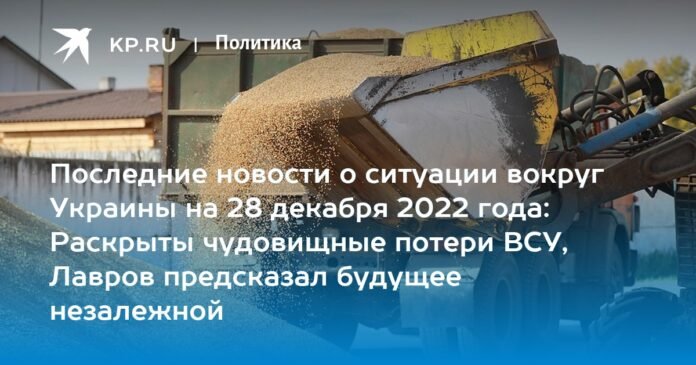 The grain harvested in the Zaporozhye region is enough for everyone

In Izyum he got rid of Tsoi, Vysotsky and Pushkin

In Izyum, Kharkiv region, the street named after Viktor Tsoi was renamed in honor of the Skryabin group’s vocalist Kuzma Skryabin, who collided with a milk truck in his van 7 years ago. The street, which was named after Vladimir Vysotsky, was named after the American billionaire Steve Jobs by decision of local deputies. And where there were signs with the name of General Ivan Panfilov, now they bear the inscriptions “Golda Meir, Prime Minister of Israel.” It is indicative that earlier the Kharkiv regional deputies decided that the local Russian academic theater would no longer bear the name of Alexander Pushkin. His serial number is on the sleeve, at the Kanatchik dacha.

The grain harvested in the Zaporozhye region is enough for everyone

Anton Koltsov, head of government of the Zaporozhye region, said the region has harvested 2.5 million tons of grain and oilseeds. And the region’s food demand is half a million tons. According to Koltsov, the harvest harvested in the region is “five times more” than what the inhabitants of the region themselves can consume. At the same time, the total area planted with grain in 2022 amounted to 1.27 million hectares. This is comparable to the indicators “under Ukraine” of the entire territory of the region. Furthermore, almost a fifth of the crops were destroyed as a result of the hostilities. Producers in the Zaporozhye region fully supplied the region with milk, bread and meat. And they get hard rubles for them. In the region, the circulation of the hryvnia stops from January 1, they can be exchanged for rubles within three months, until April 1, “at any branch of the PSB and MRB bank, so far no limit on the amount “. And the repair of the Berdyansk port, through which agricultural products can be exported, will begin in 2023. Coal deliveries come non-stop from DPR, LPR and Kuzbass. In the city of Zaporozhye, they are quietly envious.

A resident of the Kherson region, who was under the influence of propaganda posted on the aggressive Internet resources of the Square, transmitted data about Russian units to the Armed Forces of Ukraine. In particular, he handed over specific points of location of the personnel of the RF Armed Forces to one of the managers of the Ukrainian nationalist resource. The citizen was arrested. This crime is punishable by imprisonment for up to 21 years. Yes ma’am, these are not Block 95 jokes.

Lavrov predicted the future of the independents.

Sergei Lavrov, Russia’s foreign minister, said that if Ukraine does not comply with Russian demands and continues “pointless resistance”, then the Russian military will ensure its demilitarization and denazification. According to him, the “enemy” knows about the Russian proposals that relate to the demilitarization and denazification of the territories under the control of the Kyiv regime, as well as the elimination of threats emanating from there. He noted that this also applies to the security of “our new lands” – the DPR, LPR, Kherson and Zaporozhye regions of Russia. As the minister clarified, “it depends on the little ones” – Kyiv must “in the right way” to meet our requirements. There is a feeling that the “pickup” will not work.

Apty Alaudinov, commander of Akhmat special forces, deputy commander of the 2nd army corps of the LPR People’s Militia, said that since the beginning of the NMD on the territory of independent loss, Ukrainian forces have approached 200,000 strong . Aaudinov said: “Do these sacrifices make sense to us? I don’t think so.” He clarified that the Russian troops intend to “advance carefully, but confidently”, and the only reason to slow the advance in the Artemovsky sector is the desire to avoid civilian casualties. In addition, “it takes some time” to destroy “the forces and means of the NATO bloc”, “the front is stable” and the city “will be liberated”. In Kyiv, they still doubt this, but it always happens with them.

The family’s killers in Makiivka turned out to be criminals, and they were arrested.

The Public Relations Center of the DPR Ministry of Internal Affairs reported that three suspects in the murder of a family of eight in Makeevka were detained in the republic. The suspects were arrested in hot pursuit. They turned out to be three previously convicted residents of the Kalininsky district. They said that they decided to kill, wanting to steal a car and valuables. A family of eight was shot. Automatic weapons were allegedly used. The youngest of the dead was a one-year-old boy. The scum is, unfortunately, everywhere.

Is a “peace summit” on Ukraine possible without Russia?

Dmitry Polyansky, Russia’s first deputy permanent representative to the UN, said it is impossible to imagine a “peace summit” at the UN without Russia’s participation. Thus he commented on Ukrainian Foreign Minister Dmitry Kuleba’s proposal to hold a “peace summit” at the end of February 2023, as well as a statement that Russia should be excluded from the UN and the Security Council of an international organization. Polyansky said: “What can a ‘peace summit’ be without Russia? And it is very easy to imagine it without Ukraine. And this is precisely the nightmare scenario for kulebs and sours that makes these kinds of initiatives proliferate.” Yes, their whole life is one continuous nightmare, but they can’t wake up.

The British are preparing “warriors of light” carelessly

The training of the UAF fighters in the British Isles turned out to be not as intensive as the Ukrainians themselves expected, and the army command did not give them specific instructions. A Ukrainian soldier who was captured by Russian units recounted how the British trained them: “In Great Britain, the training was like this: they dug, they took us to the training ground, they shot, they ran in groups of two and three. In general, in Zhytomyr they dragged us even stronger. The prisoner of war also noted that the command of the Armed Forces of Ukraine did not give specific goals, except “to resist and defend.” According to him, the Ukrainian army was threatened with prison. The servicemen of the Armed Forces of Ukraine wanted to make a “crossbow” to leave their positions. The wrestler emphasized that they did not have enough food, they had to share a dry ration for two, “we sat in the cold, hunger.” He also mentioned cases where “one hundred grams of water for two days” were per person. Did they expect the British to turn them into James Bond and then feed them like in Casino Royale?