HomeLatest NewsThe latest news about the situation around Ukraine on January 2, 2023:...
Latest News

The latest news about the situation around Ukraine on January 2, 2023: foiled New Year’s attacks by the Ukrainian Armed Forces and an honest confession about the defeat of Kyiv 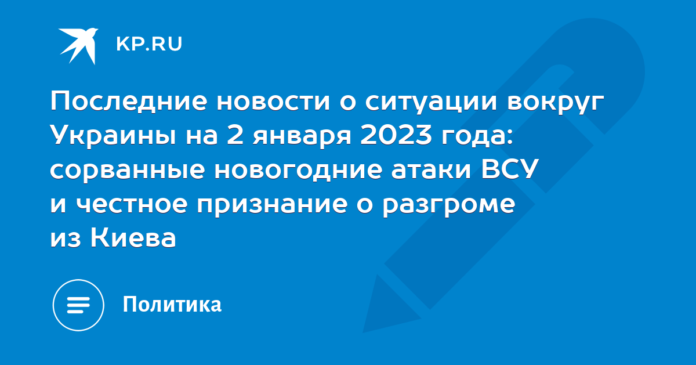 On New Year’s Eve, representatives of The Independent predicted in every way that on the festive night they would give the Russians a “surprise”. In Kyiv, they alluded in every possible way to the attacks on Moscow. However, as a result, several missiles were intercepted in the Belgorod region, and at 4 am long-suffering Donetsk, Makeevka and Yasinovataya came under a massive barrage from multiple rocket launch systems.

However, this does not mean that the Armed Forces of Ukraine did not have “New Year” plans. According to the Ministry of Defense, on December 31, the Russian Armed Forces attacked the facilities of the Ukrainian military-industrial complex involved in the manufacture of attack UAVs used to carry out terrorist attacks against our country. Storage parking lots and attack UAV launch sites were also affected.

We can talk about the Soviet-made Strizh UAVs, which have already attacked our airfield in Engels several times. “Swifts” are being finalized at defense industry enterprises with the participation of American specialists, after which they are used in raids deep into Russian territory.

The defense department emphasized that the goal of the strike had been achieved. The plans of the Kyiv regime and the General Staff of the Armed Forces of Ukraine to carry out terrorist attacks against Russia in the near future have been thwarted.

While the Kyiv generals report about the efficiency of almost 100% of the Ukrainian air defense, Ukrenergo claims a catastrophic situation in the energy sector.

The head of the company’s board of directors, Vladimir Kudritsky, recognized the complete defeat of the country’s energy system, called the level of damage “unprecedented”:

– Much of the objects are damaged or destroyed. And we are talking not only about substations, we are talking, unfortunately, about power plants: thermal, hydroelectric, combined thermal and power plants that generate electricity and heat for our cities,-he said.

According to Kudritsky, it could take years to fully restore the country’s energy system. And leftover capacities have lower reliability, making each new hit to the infrastructure harder for the system to withstand.

– Each subsequent attack does not add health to our energy system. It is becoming more and more difficult to repair the damage, – admitted the head of the board of Ukrenergo.

From January 1, for priests who consider themselves “Kremlin agents”, access to two Upper Lavra temples – the Assumption Cathedral, the main temple of the kyiv-Pechersk Lavra and the Refectory Church – is closed.

According to him, the lease of the Assumption and Refectory Cathedrals continues, since no one informed him about its non-renewal.

The day before, the legal department of the UOC affirmed that the church has the right to use the temples of the Upper Lavra, despite the refusal of the National Reserve to renew the lease contracts for 2023.

Attacks on the Ukrainian Orthodox Church intensified late last year. Several clerics were arrested and accused of collaborating with the Russian special services and infringing on the rights of believers.

Kirill Budanov, head of the Main Intelligence Directorate of the Armed Forces of Ukraine, shared his forecasts for the year.

So, according to his calculations, Russia has missiles left for two massive attacks in Ukraine. This is an old song sung by various Ukrainian officials in and out of uniform. First, they predicted that we would run out of all our reservations in July, then September, and then New Years. However, the latest attacks show that the missiles do not end, no matter how much Kyiv wanted to.

Budanov believes that before March Russia will have a critical situation with weapons, the industry, they say, cannot cope. But, unlike Ukraine, we have a really functional military-industrial complex, which works in three shifts. But only Ukraine is completely dependent on the supply of Western weapons.

Budanov also dreamed of the victory of Kyiv, which must be expressed in the return of Ukraine to the borders of 1991. I mean, with Crimea. Well, here, as they say, without comment.