HomeLatest NewsThe latest news about the situation around Ukraine on January 4, 2023:...
Latest News

The latest news about the situation around Ukraine on January 4, 2023: the Ukrainian ambassador to Israel wants to become persona non grata, and the Prime Minister of Nezalezhnoy promised small power plants to small Ukrainians 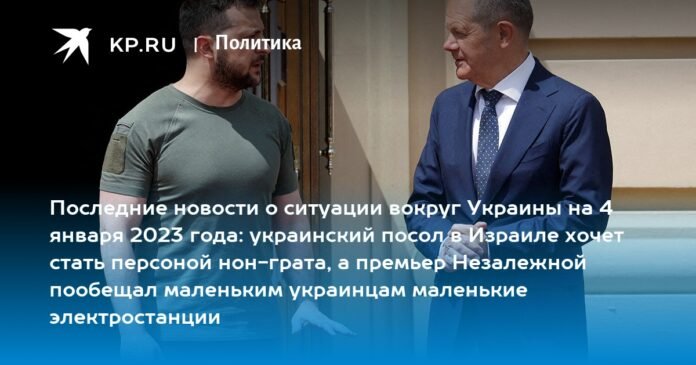 Several European leaders immediately called Zelensky and promised him all the help Ukraine needed. Among the callers, we can especially highlight the head of the European Commission, Ursula von der Leyen, the Prime Minister of the Netherlands, Mark Rutte, and the British Prime Minister, Rishi Sunak, who could not be correctly named by the president of the United States, Joseph Biden.

Rutte in the conversation was pompous, but vague. His promises were reduced to guarantees that the Netherlands “will help Ukraine not only to survive, but also to win.” A promise from a country that resisted the Nazi invasion for 5 days in 1940 must of course be taken seriously.

But the head of the British government was more specific. He promised new deliveries of military equipment in the coming weeks and months. And he, too, is counting on the Kyiv win.

“Ukraine can count on the UK’s continued long-term support, as evidenced by the recent deployment of 1,000 anti-aircraft missiles to Ukraine,” the prime minister said, according to Sunak’s office. – In addition, work is underway to transfer additional military equipment to Ukraine in the coming weeks and months to ensure its victory on the battlefield.

So many promises that you can’t take away.

The Square government has found a way to deal with Russian missile (and drone) attacks. At a meeting of the Cabinet of Ministers, the Prime Minister of Ukraine Denys Shmyhal announced that in order to create a decentralized energy system in the country, they plan to build small power plants, giving preference to solar, wind, hydro and hydrogen technologies. As for hydrogen, it will probably start immediately after the launch of the first hyperloop, and as for everything else, it’s a very realistic plan. In theory. But why is the generation of pedal bikes unfairly overlooked? And the generation of the jump? Inexhaustible reserves, given that we are talking about Ukraine.

It is also possible, by the way, to arrange small smelting furnaces like a mini-blast furnace in each hut near the cherry orchard, as was done in China by order of the Great Helmsman. The same metallurgical giant Arcelor, which was stopped, will be completely replaced. True, the Chinese soon abandoned this “metal” from domestic mini-smelters due to its low efficiency and quality, but most likely they lacked perseverance, not the Ukrainians, after all. But as for the belief that Russian missiles will not hit small power plants, it is better to get rid of these illusions immediately.

There is only one small but very significant question: who will build all this?

AND THE MILLER’S LAUREL DOES NOT GIVE PEACE

A new diplomatic victory for Kyiv was not long in coming. After phone conversations between Israeli Prime Minister Benjamin Netanyahu and Ukrainian President Volodymyr Zelensky ended in nothing, Ukraine’s Ambassador to Israel Yevhen Korniychuk decided that relations between the two states were too even and decided to cheer them up. And, neither more nor less, he criticized the new Israeli foreign minister, Eli Cohen, for having had telephone conversations with the Russian foreign minister, Sergei Lavrov.

“This conversation is a change in Israeli policy,” the Kyiv envoy said, lamenting that “barbaric attacks against Ukraine” were not noticed in Jerusalem. I really want Korneichuk to become the hero of a new scandal in Ukrainian-Israeli relations, like the same Miller in German-Ukrainian relations. But Eugene does not take into account two factors: Israel is not the Federal Republic of Germany, they will not tolerate a boor there for a long time. And second, but not least, US Secretary of State Anthony Blinken personally asked Cohen to convey his message to Lavrov.

Zhenya, do you understand where you got yourself? 10 years without the right to reciprocate will shine for you in the current Plaza. Again, and at best, “you will hear bjoli buzzing around the hut” (bees buzzing near the house).

10 YEARS IN PRISON FOR LETTERS WITH THE LETTER Z

However, ten years of heaven in a box in the Ukraine can now be snatched away by almost anything. An employee of the Kharkiv Tonis Center TV channel started making flyers in April. Well, how to do it? He drew models and sent them to her daughters in Russia. The designs used Russian patriotic symbols: the St. George ribbon, the cries “Work, brothers! Victory is ours! We are in our own land!” etc. Apparently, the man helped his daughter complete some kind of educational assignment. I didn’t hand out flyers on the street, I didn’t advertise, I didn’t organize actions.

But there was no luck, either they reported it, or they calculated it, in general, they caught it. The other day, “the most humane court in the world” -Ukrainian- sentenced him to 10 years in prison. Here, you can’t screw up. Unless, when Ukraine switches to the Latin alphabet, he will be able to try to explain that he was just trying to draw a new alphabet, which only started with the last letter.

A NEW WAY OF DISCOVERING MOBILIZATION

During the New Year gathering in Kyiv, 19 festive fireworks were launched during the curfew. A person from the Podolsky district of the Ukrainian capital was detained by police and now faces a criminal case and a real, albeit brief, sentence. However, according to information from his acquaintances, he does not despair and does not intend to appeal the verdict. And all due to the fact that now they will not be able to mobilize him and send him to the front.

Something tells us that now not only “geraniums” and “gauges” will be bustling in Kyiv. Because it is the cheapest way to get away from mobilization.

Turkey’s Council of State approved the withdrawal of the Istanbul Convention, which introduces the concept of gender and launches the legalization of same-sex marriage. Remember that gender does not mean a person’s biological sex, but who they feel/designate/identify. Thus, Turkey finally withdrew from the Istanbul Convention, and it is now legally bound.

But Ukraine, on the contrary, signed the Istanbul Convention this summer in the person of Vladimir Zelensky and officially ratified it.

– The director of public relations of the Foreign Legion of the Armed Forces of Ukraine, a well-known fraudster in Europe, was accused of stealing medicines for the military in the amount of $ 2.5 million and significant amounts of donations that she collected.

– Lithuania has not paid compensation for heating to citizens for several months, the amount of debt to citizens has already exceeded several million euros.

– In France, where until recently nuclear energy was the pride of the country, and the republic itself was a donor of energy to neighboring countries, local authorities began to distribute coupons to receive firewood.

– Dnepropetrovsk Mayor Boris Filatov proposed to extend decommunization and de-Russification to food and abandon salads “Olivier” and “herring under a fur coat.” And he boasted that jelly, unlike “Russian dishes”, you can eat for a week. And you won’t get tired. And I got tired of Olivier on the second day.