The main scandals of 2022 at beauty pageants: “Miss Kazakhstan” was deprived of the crown, and the Russian woman settled in the same room with the Ukrainian one. 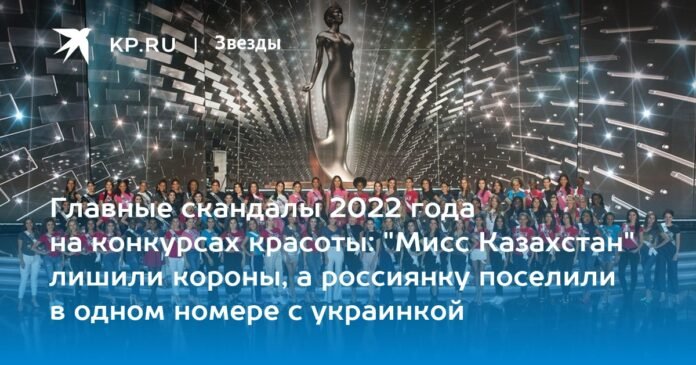 Even on New Year’s Eve, the beauty industry has no time to rest: the 71st Miss Universe pageant will take place in New Orleans from January 3 to 14. The Russians there, by the way, have not been canceled, and our Miss Russia 2022 Anna Linnikova is preparing for the final with might and main. However, she still could not do without scandals, moreover, with the participation of our close neighbors …

So, the other day, “Miss Kazakhstan-2022” Diana Tashimbetova not only left the race for the title of “Miss Universe”, but also lost the crown of national beauty. The shock became strong.

“The organizers and management of Miss Kazakhstan did not provide me with proper training and denied me funding, despite the fact that I had already bought a visa, tickets and sewed several evening dresses with my own money,” Tashimbetova said on her social networks. . -I will not go into dirty details, but I want to say that there was no support from her. From morning until late at night, I was mentally and physically completely alone preparing for the competition. They threw me in the middle without doing any work…

Diana Tashimbetova was not only eliminated from Miss Universe, but also stripped of the Miss Kazakhstan 2022 crown.

The organizers did not remain silent either: they issued an official statement: they say that the Miss Kazakhstan contest was held only at the end of November, and they only had a month left to prepare for the world beauty spectacle. Success is unrealistic. Yes, and rubbish in the beauty industry is not accepted, therefore, with the light hand of the organizing committee, Diana Tashimbetova lost the crown of “Miss Kazakhstan”.

However, scandals at beauty pageants are not uncommon.

“At the end of November, for example, in the same Miss Universe 2022, a contestant was suspended from Bolivia,” Anton Paramonov, an expert in the field of beauty pageants, tells KP.RU. -The girl discussed competitors in her social networks, drove through each one. And the management of “Miss Bolivia” issued a statement that such a participant is not worthy of representing the country, as a result, they made a replacement. Gossiping at beauty pageants is strictly prohibited, except in your own kitchen. But still not everyone understands this.

Expert in the field of beauty pageants Anton Paramonov.

Then a few years ago a Russian contestant fell into a similar embarrassment.

– In her social networks, the girl broadcast with the star make-up artist Serdar Kambarov, and they decided to see all the participants of Miss Universe, – continues the expert. – Only Serdar spoke – something like that, they say, this monster, but this one generally looks like a man. The participant sat next to her and laughed. This video spread instantly on social networks, critics rained down with demands to remove our “miss”. She had to record an apology video. She still went to the competition, but she did not take any place. Although, if not for this scandal, in my opinion, she could have entered at least the TOP-20.

BEAUTY OUT OF POLITICS? WHAT IS NOT

But do not think that “Miss Universe” is the most quarrelsome contest. There are scandals in lesser-known shows, but it almost never comes to Russia: it is somehow not customary for us to follow beauty contests.

– In October this year, the “Miss Grand International” show was held in Indonesia. And while the Russian participant, whom I sent, was flying on an airplane, it became known that the organizers decided to put the girls from Russia and Ukraine in one room. Apparently they wanted to exaggerate, – says Anton Paramonov. -The Ukrainian woman immediately published an aggressive post that she would not live with a competitor from the “despot country”. Yes, and we worry: our dresses are expensive, what if a neighbor cuts them off or does something else? In the end, she collapsed.

They wanted to put Yekaterina Astashenkova in the same room with the Ukrainian participant in the Miss Grand International contest.

But these were just flowers: a beauty contest in faraway Indonesia suddenly found itself at the epicenter of political scandals.

– In the final, a girl from Puerto Rico took the stage and addressed a message to Vladimir Putin in pure Russian, – recalls the expert. – And that’s not all. The TOP-5 finalists also had to appeal to the Russian authorities. Then a girl from the Czech Republic, whom I really liked, suddenly came out with a loud statement that her country had lived under the yoke of the Soviet Union for many years …

THE END OF THE ERA OF NORMALITY

But the main surprises seem to be yet to come.

– Starting this year, Miss Universe has new owners. Donald Trump sold the competition a long time ago, even before his presidency. But the company that Miss bought suffered greatly due to the pandemic; this turned out to be a great loss for the organizers. As a result, this year a transgender from Thailand, a local media magnate, became the new owner (Chakrapong Chakrujuthab was born a man, but after reaching the age of majority he changed gender. – Ed.). And already from 2023, according to the new rules, married women, those who give birth, pregnant women and, it seems, even those who have changed their sex, will be able to participate in the competition. So this contest in New Orleans is the last one where we’ll see a normal lineup, Anton Paramonov is sure.