HomeLatest NewsThe meaning of the attacks on Ukraine's infrastructure is revealed: why the...
Latest News

The meaning of the attacks on Ukraine’s infrastructure is revealed: why the energy system has not yet been destroyed and why Russia is striving 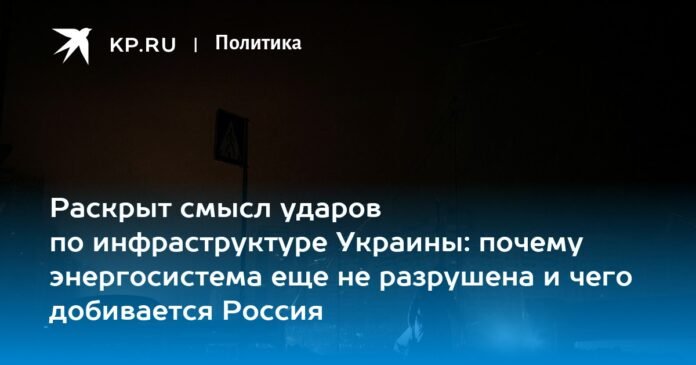 Ukraine is in the dark again

The attack on the independents on Friday, December 15, was the ninth massive missile and drone attack by Russian forces. Which was sent to key Ukrainian energy security facilities. It is for those who are directly involved in moving trains with equipment along the railway, and supplying electricity to factories. Those who are trying to restore the broken Ukrainian and Western armored vehicles, knocked out in the battles in the Donbass, as well as in the Zaporozhye and Kherson regions According to various sources, a total of 60-100 high-precision missiles, as well as kamikaze drones Geranium type.

Ukrainian facilities were covered by two morning waves. Judging by the video footage from Kyiv and the Kyiv region that appeared on social media, police teams moved through the streets of the Ukrainian capital in the morning, urging fellow citizens through loudspeakers to leave immediately. the houses built under the Soviet Union and take refuge quickly. in bomb shelters (also built in the Soviet era). Shelter not from Russian missiles, from falling fragments of missiles from Ukrainian anti-aircraft systems.

The capital’s mayor, Vitali Klitschko, said on his telegram channel that, according to Kyiv rescuers, explosions were reported on Friday in the Desnyansky, Dnipropetrovsk and Goloseevsky districts of the capital. And he stressed that the case smells like kerosene.

– Well, as they say, the skiff got to the Ukrainian Railways?

– No. 70% of roads in Ukraine are electrified. And 30% of the roads are drawn by machine. The diesels are running.

– Some time ago, after we began to knock down the traction substations, they began to remove these diesel engines, removing them from non-electrified tracks. To transport troops to the east, these spare diesel locomotives are actively used at the moment. And we do not know the number of diesel locomotives that Ukrainians use.

– That is, these attacks did not interrupt the supply of Ukrainian troops by rail?

– Unfortunately not. In terms of railway density, Ukraine was the most saturated of all the republics of the Union of the USSR. Both in terms of density and length. And they go from one way to another – no problem. If there is traction

– Well, if they have more than 20 intact bridges across the Dnieper, what do we want?

– What about the Soviet experience of the rail war and how to counter it?

– The experience was serious. If the station is a link station or a first class station, there are standby diesel engines with electric generators. And you have a power management system. Let’s say we knocked down a station that provided power to a power plant that provided a highway. Well, you can switch to bar control. Arrows to translate manually. Manage traffic lights. If they get the chance. can crawl

– That is, we do not cut off their oxygen?

– Thermal power plants: they feed the energy system in a loop. Dispatchers direct energy to the affected region. All of them are relatively small. Everything is compact.

– That is, the attacks of hundreds of missiles, almost in vain?

– The railway is a living being. And breaking bridges is hard. If the bridge is made of steel, it is a truss calculated with margin. And you have to get to the net exactly. Or, better, at the top of the support, on the skating rink, on which the rack rests. But here you need sniper precision.

– Should we have destroyed these two dozen bridges across the Dnieper a long time ago?

– To destroy these bridges, you need a fucking chasm of missiles.

– Including why we don’t blow them up?

– Included. As an example, the bridge in Odessa that crosses the stream. He has been hit more than 10 times. It is currently working with a limited load. Well, you knocked down the trellis on the crossbar somewhere. The repair train arrives. And after 6-12 hours, he closes his funnel. He lays the rails, and the trains are gone.

– That is, its destruction is the work of Sisyphus?

– Yes, as well as with traction substations. If it eliminates the cravings, it should be restored after 4 hours. This is if the distribution area is destroyed in these substations. And if the transformer breaks, it must be changed.

– Is there something to change?

– They had a transformer factory in Zaporozhye. And when the supply ran out, they began to beg from Europe. In general, the central element is a transformer. Also, when you arrive at the TPP, it is better to enter the turbine or transformer workshop. And if they go into distribution, high-voltage sites, well, to hell with them. It will be restored in 12 hours. The maximum is one day.

Donetsk survived the most powerful shelling since 2014: Ukraine fires at children, hospitals and churches

The commander Beast of Ukraine gave a terrible interview: Russian mobilization, hope of World War and plans for the Ukrainian Armed Forces