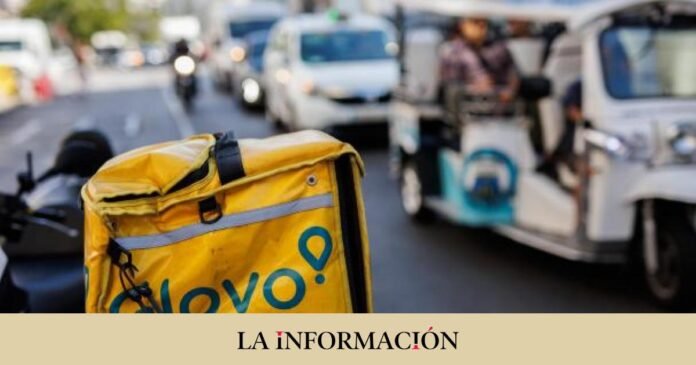 Until last July, the sanctions of the Labor Inspectorate to Glovo was a shared problem. Now it is for only one company: Delivery Hero. The owner of the food delivery platform, which received criticism from analysts and investors for executing the acquisition of the Spanish company, faces a bill of unpaid quotas and fines of more than 130 million for “false self-employed” only in the three main cities -Madrid, Barcelona and Valencia-. The Germans had not provisioned anything in the first half of 2022, since the purchase of the firm founded by Óscar Pierre was activated at the beginning of the summer. The Spaniards did not do it either at the end of 2021 when the contingencies were in the tens of millions, which led to the recrimination of Deloitte in its audit report. Both parties seek to buy time in court before addressing the payment.

The Ministry of Labor announced on Tuesday the result of the ‘mega-inspection’ in Madrid: 52 million and 7,000 riders regularized as employees. A hard blow that is preceded by another that was notified in September: the regularization of 10,600 distributors and the payment of 79 million between unpaid fees and penalties. Before these resolutions came many more in the main Spanish provinces. Others are still open and may be substantiated in the coming months. In total, about 200 million euros have been prosecuted -or judicial processes- that could exceed 250 million if the processes still to be closed are added. This only applies to pre-Rider Act cases.

Glovo opted from the beginning not to provision any money in its accounts as a preventive formula. Neither did he after receiving a first ruling from the Supreme Court knocking down his model of autonomous riders -and the rejection of a similar appeal filed by Deliveroo-. At the end of 2021, whose accounts were approved at the meeting last June 2022, he did have a provision of 200 million euros for his stock options plan that he was going to distribute between the leadership and the staff. They assured that all the minutes drawn up had been alleged, for which reason they had all been suspended. But Deloitte, who worked as an auditor, raised a salvation in his report: “We have not had information that allows us to satisfy ourselves with the provision that would be necessary to record.”

Delivery Hero does not include it in its supplies either. In the semi-annual accounts, it was only limited to including the Glovo assets that were incorporated into the perimeter after formalizing the purchase of almost 95% of the Spanish company in July. He spoke of almost 500 million euros, between provisions and debts, but the former mainly contemplated the ‘stock options’ bonus that they disbursed to the Glovo leadership for the sale. He made no mention of possible contingencies. But where it did do so was in the purchase and sale contract signed with the main funds on December 31, 2021.

In that contract, as La Información advanced, a clause was established that regulated legal risk: all lawsuits linked to the ‘rider model’ were excluded from those that allowed the Germans to overthrow the pact. That is, they assumed all these procedures and their consequences as their own. The group’s CEO, Niklas Östberg, assured in the presentation of the operation in January 2022 before analysts that the Spanish company was doing a “great job” to take care of the ‘riders’. “The more flexibility there is, the better,” he said. Subsequently, before the Ministry of Labor itself, he made a promise that he would comply with the regulation in what was a ‘toast to the sun’ to obtain authorization from the Government to purchase Glovo under the ‘anti-opas shield’.

In that contract, mention was made not only of the dozens of minutes drawn up between 2020 and 2021, but also those that were open at the end of that last year. The strategy maintained by the Spanish, and which is sustained under the umbrella of the Germans, is to gain time by prosecuting cases. Present appeals in all procedures, not only through administrative channels, but also through the courts. This implies that it will not be a firm resolution until after three or four years. So far there has only been one trial that has reached the Supreme Court. But from Social Security they can play with the ‘coercive route’. They did so in December 2020, when they collected 21 million euros of debts from open proceedings until October of that year. I could do the same with others.

In this context they have found in the Minister of Labor, Yolanda Diaz, a particular ‘enemy’. The second vice president of the Government remarked on Tuesday that this new fine is an example that “no company in Spain, however large or small, is going to remain outside the law.” Notice that not only these steps will be taken. She does not mention at any time Uber Eats, which since September has maintained a model of autonomous riders -with which it intends to avoid the new ‘rider law’- but which has several open procedures with the Inspection.

The regulatory problems, together with the valuation that was initially set for the purchase of Glovo -paid in shares- and the expected losses in its business, were pointed out by analysts and investors in their criticism of the operation. Delivery Hero had to justify and defend the need for this acquisition for months. Analysts such as those at HSBC even went so far as to speak of a “rescue”. These blows from the Inspection in Spain are not going to make it easy. They will not be the last, as there are many inspections to be carried out. And, above all, there remains the great exam of the ‘rider law’. For now, no severe inspection has been closed in this new regulation and in the model proposed by the platform. But they are still in the spotlight of Labor.