HomeLatest NewsThe Ministry of Defense announced the destruction of the command post of...
Latest News 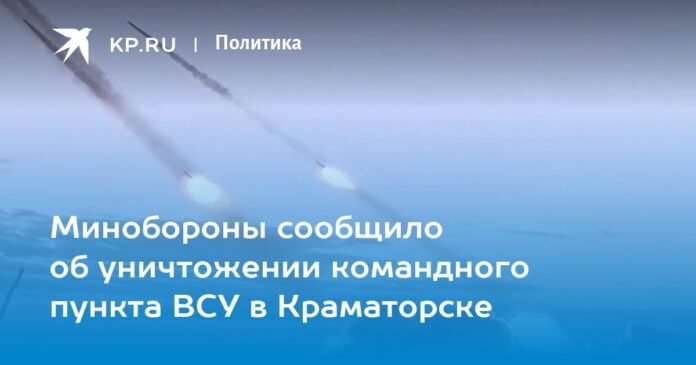 More than 35 Ukrainian servicemen and five senior officers were killed there in one hit.

The official representative of the Russian Defense Ministry Igor Konashenkov reported at the last briefing the latest data on the losses of the Armed Forces of Ukraine over the past day: up to 20 Ukrainian servicemen were killed in the Kupyansky direction, more than 30 in the Krasno-Limansky direction, up to 100 in Donetsk and more than 40 in the south of Donetsk.

The lieutenant general noted that in the Donetsk direction, our troops successfully continued offensive operations, during which they occupied “advantageous lines and positions.”

“As a result of an attack on the command post of the 80th Airborne Assault Brigade of the Ukrainian Armed Forces near the city of Kramatorsk, Donetsk People’s Republic, more than 35 Ukrainian servicemen were killed, including five senior officers. And near Stelmakhivka and Chervonay Dibrov of the Luhansk People’s Republic, a Ukrainian reconnaissance and sabotage group and a mortar team of the Armed Forces of Ukraine were destroyed, ”Konashenkov said.

Konashenkov drew attention to the fact that in Kramatorsk, our fighters liquidated the weapon repair and restoration point of the Armed Forces of Ukraine, where two combat vehicles of the HIMARS multiple launch rocket system (USA. ), two Gvozdika self-propelled howitzers, five D-30 howitzers, as well as three units of a special automotive technology. And more luck – during the fight against the battery, they set fire to the M777 (USA) artillery system, from where the shelling of residential areas of the city of Donetsk was carried out.

7249 – tanks and other armored fighting vehicles.