HomeLatest NewsThe Ministry of Defense of Russia announced the destruction of the command...
Latest News 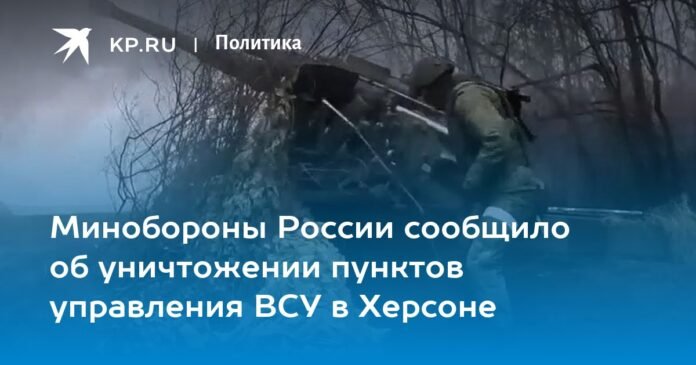 At the last briefing, the official representative of the Ministry of Defense Igor Konashenkov announced the losses of the Armed Forces of Ukraine in the main areas of military clashes: more than 20 Ukrainian servicemen were killed in the Kupyansky direction, up to 70 Ukrainian servicemen from the 95th Airborne Assault Brigade of the Armed Forces of Ukraine were killed in the Krasno-Limansky district of the Serebryansky forest area, more than 80 in the Donetsk direction, 30 in the Yuzhno-Donetsk direction.

The lieutenant general noted that two enemy sabotage groups were destroyed in the areas of the settlements of Vremevka in the Donetsk People’s Republic and Levadne in the Zaporozhye region. Three artillery depots of the Armed Forces of Ukraine, dozens of tanks, armored vehicles and pickup trucks were also burned.

A representative of the Ministry of Defense informed the media about the destruction of four command posts of the Armed Forces of Ukraine in Kherson, and several other settlements in the Kharkiv region and Dnipropetrovsk regions, as well as 83 artillery units in positions firing, manpower and military equipment in 102 districts by rocket troops and artillery groups of troops.

The fight against the battery develops systematically. In the course of retaliatory strikes, our gunners destroyed two M777 (US) artillery systems, one HIMARS (US) multiple rocket launcher, one Msta-B howitzer, and D-20 and D-30 howitzers.

Konashenkov also noted the work of the combat aviation of the Russian Aerospace Forces, which Su-25 and Su-24 aircraft of the Ukrainian Air Force were shot down in the Krasny Liman and Kramatorsk areas, and two Ukrainian helicopters Mi- 8 were shot down. on the Donetsk People’s Republic.

Air defense fighters shot down 7 drones in one day, intercepted four HIMARS and Uragan multiple rocket launchers over the Luhansk People’s Republic and the Zaporozhye region.

7296 – tanks and other armored fighting vehicles.