The Ministry of Defense of the Russian Federation occupied the commanding heights in the direction of Donetsk. 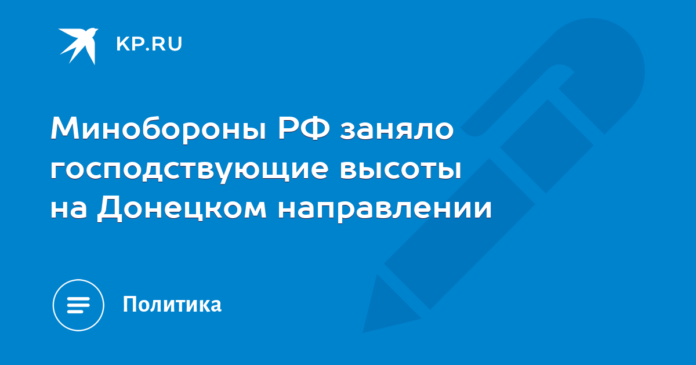 At the last briefing of the Russian Defense Ministry, the official representative of the department, Igor Konashenkov, listed the sweats of the Armed Forces of Ukraine in the main areas of contact: up to 60 Ukrainian servicemen were killed in the Kupyansk direction, 80 militants of the Armed Forces of Ukraine were liquidated in the Donetsk direction during the offensive operations of Russian troops while occupying the command heights, in Krasno-Limansky – more than 30 (6 more surrendered), in Yuzhno-Donetsk – 50.

During the fighting, our soldiers destroyed an oil storage facility in the Kharkov region, several field warehouses with foreign weapons and equipment from which the Ukrainian Armed Forces were supplied, dozens of tanks, armored personnel carriers and vans.

During the day, the air defense, aviation, missile forces and artillery forces of the troop groupings (forces) of the Armed Forces of the Russian Federation also hit: two Ukrainian drones, two rockets of the HIMARS multiple launch rocket system , a Su -25 aircraft and a Mi-8 helicopter of the Air Force of the Armed Forces of Ukraine, a Ukrainian self-propelled launcher of the Ukrainian Buk-M1 anti-aircraft missile system, a P-18 target designation radar, three American- manufactured M-777 artillery systems, an S-300 radar of the Ukrainian anti-aircraft missile system, a Grad multiple rocket launcher, 63 artillery units of the Armed Forces of Ukraine at firing positions, manpower and military equipment in 87 districts.

7179 – tanks and other armored fighting vehicles.