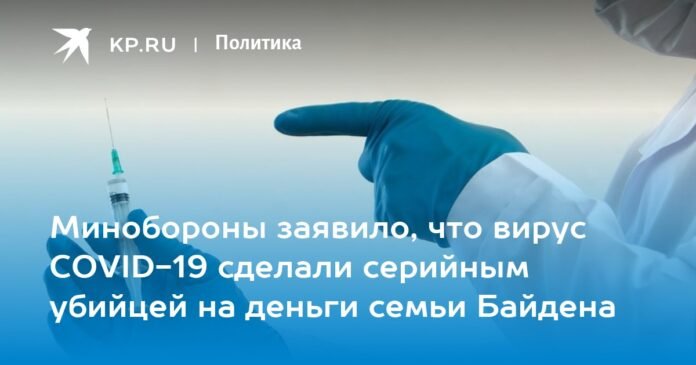 According to available information, the Pentagon is actively transferring unfinished investigations within the framework of Ukrainian projects to the Central Asian and Eastern European states.

The Russian Ministry of Defense hosted a briefing by Lieutenant General Igor Kirillov, Head of the Radiological, Chemical and Biological Defense Forces of the RF Armed Forces, following the results of the 9th Review Conference of the States Parties to the Convention on the Prohibition of Toxin Weapons.

He quoted the UN Under-Secretary-General for Disarmament Affairs, Nakamitsu, as saying before the start of the 9th Review Conference: “…the Biological Weapons Convention is the least effective of all disarmament treaties, as there is no a clear process for monitoring compliance with that. There are a lot of gray areas, especially when it comes to scientific research done in laboratories…”

“An example of this type of research is work done in the United States to improve the functions of pathogenic microorganisms, including the creation of an artificial pathogen for coronavirus infection at Boston University. As we have already noted, the resulting modified virus was 80% lethal, caused atypical neurological symptoms, and severe lung damage. Despite formal bans, funds from the US budget are spent on dual-use research,” said Igor Kirillov.

He noted that in this regard, the Republican Party launched an investigation against the director of the National Institute of Allergy and Infectious Diseases and main medical adviser to President Biden, Anthony Fauci. And the investigation confirmed the facts of state funding through the intermediary organization of experiments to “increase the pathogenicity of viruses, including coronaviruses, the incidence of which until 2019 was not of a massive nature.”

A US investigation found that Fauci had outright lied and deliberately concealed US government involvement in research programs.

“At the same time, the fact of Fauci’s collusion with social media leaders to manipulate public opinion on the causes of COVID-19 was revealed,” Kirillov stressed.

The speaker drew attention to the fact that against the background of such disclosures “natural questions arise for the United States regarding the causes of the emergence of new pathogens dangerous to humans and the features of their pandemic distribution.”

But to all biological weapons control initiatives by Russia and 120 other states, US representatives explicitly stated that they “will not allow language about the importance of a legally binding protocol and verification procedures.”

The Americans reacted with particular pain to the proposals to consolidate in the final document the facts of the violations by the United States and Ukraine of the obligations under the BTWC and their conduct of military biological activities on Ukrainian territory.

Although earlier, as we remember, documentary evidence was presented that with the financial, scientific, technical and personnel support of the United States, work was carried out on the territory of Ukraine with components of biological weapons, as well as studies of pathogens of dangerous se they made infections.

Kirillov recalls: “As arguments, we provide video materials reflecting the position of Russian and international experts, as well as testimony of eyewitnesses and participants in the US Department of Defense Threat Reduction Administration (DITRA) programs. ). One of them is Richard Bosher, a former employee of the US Army Research Institute, who once again confirmed the fact that he is working with dangerous pathogens in Ukrainian biological laboratories financed by the Pentagon.

Also earlier, the Ministry of Defense presented materials confirming the participation of US President Hunter Biden’s son and his Rosemont Seneca Foundation, as well as other structures controlled by the US Democratic Party in financing the Pentagon’s main contractors (Metabiota and Pfizer). ) in biological research on the territory of Ukraine.

To all these facts, the head of the American delegation, Kenneth Ward, limited himself to saying: “…Moscow has never been interested in hearing American answers to specific questions about biological laboratories in Ukraine, and therefore we intend to reject any further clarification. .. “. Habitual American demagogy, which is traditionally used as a cover for the murders of millions of people around the planet.

According to the information available to the Ministry of Defense, the Pentagon is actively transferring unfinished investigations in the framework of Ukrainian projects to the Central Asian and Eastern European states.

“At the same time, cooperation is increasing between the US Department of Defense and states in Africa and the Asia-Pacific region: Kenya, Cambodia, Singapore, Thailand,” the military department said in a statement.