HomeLatest NewsThe Ministry of Finance has changed the structure of the National Welfare...
Latest News

The Ministry of Finance has changed the structure of the National Welfare Fund: what does this mean for Russia? 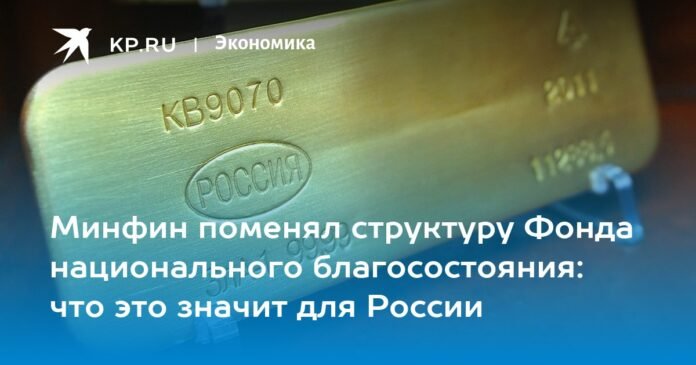 Now the structure will be much simpler. The ministry wants to bring the Chinese yuan share to 60% and the gold share to 40%

The Ministry of Finance has published a new regulatory framework for the National Welfare Fund (NWF). This is our main egg, which we have been collecting for a rainy day for a long time. It now contains the equivalent of 11.4 trillion rubles in gold and various currencies. A year ago, the structure was more diversified. There were four world currencies (euro, British pound, yuan, Japanese yen) and gold (not cash). The Ministry of Finance abandoned the dollar several years ago.

What was the FNB a year ago?

According to the Ministry of Finance by mid-2021.

Now the structure will be much simpler. The ministry wants to bring the Chinese yuan share to 60% and the gold share to 40%.

“As a result of these changes, the NWF’s monetary structure has been better adapted to the challenges facing the Russian Federation in the current macroeconomic and geopolitical conditions,” explains the Ministry of Finance.

They plan to get rid of other currencies. At the same time, the Central Bank has already completed part of the task. There were only euros left in the fund at the end of the year.

“At present, the balances in the accounts of the National Welfare Fund in British pounds and Japanese yen with the Bank of Russia have been reset to zero,” the Finance Ministry said in a statement.

The system is designed in such a way that the Ministry of Finance gives the orders and the Central Bank manages the placement of the funds. He himself chooses when it is more convenient and profitable to exchange one currency for another or buy gold. And it acts gradually so as not to cause too sharp fluctuations in the market.

Why is a capsule needed?

It is intended to be used as a last resort. When there is not enough money to pay the necessary expenses of the budget. In reality, the FNB has already begun to uncover. In November, 300 billion rubles were spent to cover the federal treasury deficit.

Previously, surpluses received from the sale of oil at a price above $42 per barrel were sent to the fund. As a result, the FNB filled up quite quickly. Now the so-called “budget rule” has changed. The Ministry of Finance considered that 8 trillion rubles of oil and gas revenue per year would be enough for them. Anything above will go to reserves. If, on the other hand, the income does not reach 8 billion, the missing money will be taken from the NWF.

As Anton Siluanov explained, according to preliminary calculations, if the price of oil is below 70 dollars per barrel, no new contributions will be made to the fund. For comparison, the average price of our Ural oil from November 15 to December 14 was $57, while the ceiling set by the European Union is $60.

Based on this assumption, a three-year budget was drawn up. It includes a deficit of 6 trillion rubles. It is by this amount that expenses in the next three years will exceed income.

Why in yuan and gold?

As explained in the Ministry of Finance, there are no other options in terms of reliability. Gold is good because it is an eternal value and it is impossible to impose sanctions on it. It is physically in our vaults. But at the same time, it will not be possible to sell bullion quickly. But the yuan will work. This is the currency of a country with which we have friendly relations and great commercial ties. At the same time, the yuan is quite stable and tends to strengthen, even compared to the dollar itself.

Other currencies have their drawbacks. For example, the Indian rupee is not quoted. It can only be disposed of within India. That is why the same Moscow exchange has not yet launched trading in this currency. They cannot get permission from the Central Bank of India. The Turkish lira is also a regular option. Yes, trade with Ankara is growing. But at the same time, the local currency is very unstable. Inflation in Turkey is over 80% and the lira has nearly halved since the beginning of the year. The currencies of the CIS countries are not suitable for reserves. The economies of the former Soviet republics are many times smaller than those of Russia. Such assets for long-term storage cannot be used.

But are our reserves frozen?

Here it is necessary to explain. The National Wealth Fund is part of our international reserves. For comparison, the volume of the NWF is about $160 billion and total reserves are about $580 billion. Approximately half of the total amount is frozen. These are non-cash funds in dollars and euros, which were in accounts at foreign correspondent banks. This is how global finance works, that the state that issued them is the owner of the currency, and they are stored in the banks of this country. Broadly speaking, the records you have in your bank account in dollars, euros or sterling can be blocked at any time. Because the original record of this money is kept not in a Russian bank, but in a foreign one.

In turn, part of the currencies was and is located within the country in cash. And you can handle it. How much money was left in stock, neither the Central Bank nor the Ministry of Finance explained. But, as you know, most of the NWF remained available; it can be spent. The same “every firefighter” came for whom these reserves were saved.

Share
Facebook
Twitter
Pinterest
WhatsApp
Previous article
Top 10 players of 2022 by goals and assists
Next article
Mikhail Gershkovich, member of the RFU executive committee: The Association of Domestic Coaches has a unanimous opinion: to do everything possible to stay in Europe – Rossiyskaya Gazeta