HomeLatest NewsThe most useless and luxurious purchases of stars in 2022: watches for...
Latest News

The most useless and luxurious purchases of stars in 2022: watches for the price of an apartment, real estate in the UAE and incredible weddings 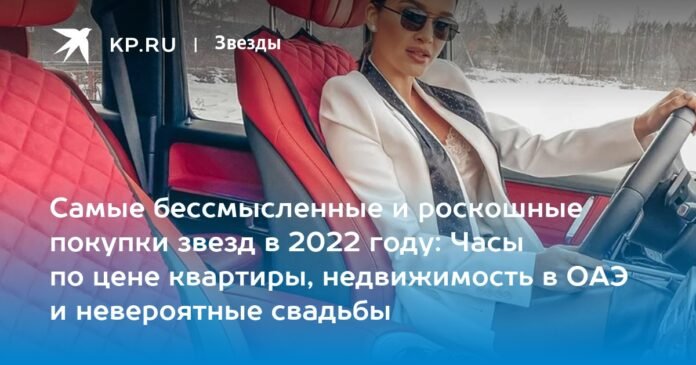 Ksenia Borodina bought apartments in Moscow, Dubai and a car in 2022.

This year, stars have become less likely to flaunt their luxury purchases. However, some acquisitions could not be hidden. Let’s take a look at the biggest celebrity buys of 2022. Very often, artists invest in real estate.

Sergei Lazarev bought an apartment in Kuntsevo – in this area of ​​​​the capital the singer was born and brought up. New housing area of ​​110 m2. in a residential complex of business class, year of construction-2008.The artist took the apartment on a mortgage, they say that he invested in housing for his children. By the way, Sergei Lazarev lives in the suburbs in a house that was also bought with a mortgage.

Olga Buzova at the end of the year moved into her first apartment in Moscow, which she bought a few years ago for 120 million rubles. All this time in a 200 m2 apartment. m was being renovated. During this time, the TV presenter saved up for other real estate: in the fall she bought a house in Sochi, in the village of Monastyr, Adlerovsky district. The house is in a guarded business-class settlement. The house is in the mountains, next to the river, around relic trees. house of 280 m2 m built of aerated concrete blocks. Housing area 280 m2. m On eight acres there is everything for recreation: a swimming pool, a barbecue area. Inside it has a fine finish, it remains to buy furniture. There are 27 multi-level plots in the village, communications are connected to each, Italian water heating equipment is installed.

Ksenia Borodina gave herself an apartment in the center of the capital for her 39th birthday. Everything as I dreamed: a quiet part of old Moscow, a house with history, high ceilings. Blogger and TV presenter Borodina is a wealthy person, she invests everything she earns in real estate. The star even earlier bought two apartments in the capital for each of her daughters. And Ksenia lives with her children in a country house, in an elite village near Moscow. Borodina has been earning decently in recent years, as she has become one of the most popular Russian bloggers: advertising contracts bring in much more money than her work as a TV presenter. Ksenia does not believe that she can earn money by leaving money on deposits in banks: “The history of banks is not mine. Take the money somewhere so you can last long after… I believe in real estate. By the way, this year Borodina had investments in real estate under construction in the United Arab Emirates: “This is not an escape from Russia. It is a normal situation when you try to secure and increase your money.”

Who else bought apartments in Moscow? The singer Yulianna Karaulova bought an apartment for her one-year-old son; she will grow up and he already has his own home; apartment with a rough finish, so you have to invest in repairs. Singing blogger Anna Pokrov bought a “kopeck piece” in a new building.

Residential complex and apartments of the family of rapper Dzhigan and Oksana Samoilova in Dubai.

REAL ESTATE IN THE UAE

Rapper Dzhigan with his wife, businesswoman Oksana Samoilova and their four children, often fly from Moscow to rest in Dubai. Previously they rented houses, and in the fall they bought their square meters in the United Arab Emirates. Now they have an apartment in the Dubai Hills complex, an area of ​​u200bu200b121 square meters. metro, renovated and furnished. Samoilova has a successful business in the production and sale of cosmetics, for which she boasts: “I took this apartment for 36 million rubles. In luxury area. The first payment is five million rubles, and the rest in installments without interest. Payments twice a year. When you buy apartments, you automatically receive residence for the whole family.” With this amount of investment in real estate, residence is granted for three years. Lawyer Timur Matveev told us what bonuses stars receive along with a resident visa: “Residence in the United Arab Emirates gives the right to reside, unhindered entry and exit from the country; opening of bank accounts. In addition, a person can carry out work activities in the UAE, receive medical services, organize and receive funds borrowed from credit organizations.

In the new complex of elite buildings, where Sobchak bought housing, there are swimming pools.

Slava ordered a new car for Santa Claus a year ago. This December, the singer herself fulfilled this wish. Now Slava travels around Moscow and on tour to nearby regions in the car of her dreams: the Mercedes-Benz V300. The singer boasts: she managed to pay for the last car before the company left the country. A black minivan with a panoramic roof is now in Slava’s garage, her main favorite.

The new car of the singer Slava.

Ksenia Borodina showed off a new car at the end of the year. A silver Rolls-Royce appeared in her fleet. Borodina, as she befits a real blogger, shot a video with something new, where she is happy with the purchase, strokes and even kisses the hood: “Guys, I’ve been waiting for this for a year!” The blogger and TV presenter placed an order at the beginning of the year and has just received the car.

Actor Pavel Priluchny arranged a luxurious wedding. In the spring, she registered a marriage with Zepyur Brutyan. And at the end of the summer, Pavel and Zepyur Priluchny held a beautiful wedding in the Moscow region. For the celebration, we rented the territory of a country restaurant in an elite closed village. There was a chic decoration with fresh flowers, entertainment program, banquet and dinner with first class catering, set design and many other essential components of a VIP celebration organized by the same wedding agency that carried out the wedding of hockey player Ovechkin.

The price of Priluchny holding – about 15 million rubles.

Decoration for several million rubles at the Priluchny wedding.

Philip Kirkorov is the main fashionista of show business. Him all year wearing new clothes. The expensive outfits of him are innumerable. But the singer boasts about accessories infrequently. For example, in the fall Kirkorov noticed a watch from an American brand with a blue titanium case. Only 99 of these were produced. But Philip has a unique engraving on the back cover – the coat of arms of Russia. At one of the premieres, Kirkorov joked that his fashionable tie, together with accessories, costs more than the organization of the banquet itself.

Kirkorov and his watch for 8 million rubles.