The Pope asks believers to pray for his predecessor 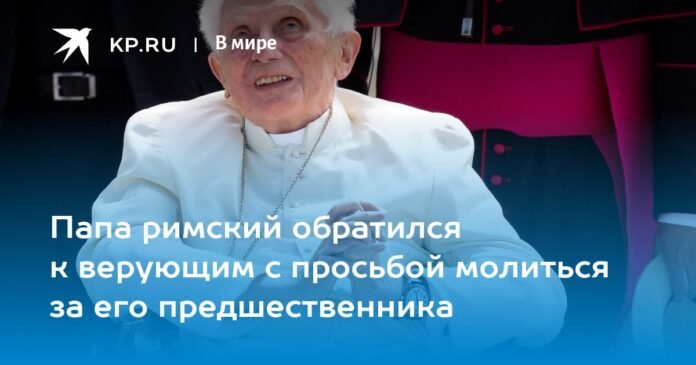 Benedict XVI, who led the Catholic Church in the spring of 2005, became the third pope in history to abdicate.

Pope Francis asked the faithful to pray for his predecessor, Pope Emeritus Benedict XVI, who is in a monastery on Vatican territory.

The Pope recalled that Benedict XVI is very ill, but did not specify in what state the 95-year-old former head of the Catholic Church is currently in, writes Vatican News.

“I would like to ask everyone to offer a special prayer for Pope Emeritus Benedict, who is supporting the church in silence. I remind you that he is very sick. Let us ask the Lord to console him and sustain him in this testimony of love for the Church until the end”, said the pontiff addressing the faithful.

Francis’ predecessor, His Holiness Benedict XVI, Papa Emeritus (Retired Pope), who led the Catholic Church in the spring of 2005, became the third pope in history to abdicate. He retired at the end of February 2013.

Before this, church history knew only two such cases: in 1415, Pope Gregory XII voluntarily retired, and before that, in 1294, Celestine V, whom history calls one of the weakest pontiffs. , tried to get rid of responsibility by abdication. That, however, did not prevent his early canonization.