HomeLatest NewsThe President of Latvia called the fight against the Russian language a...
Latest News 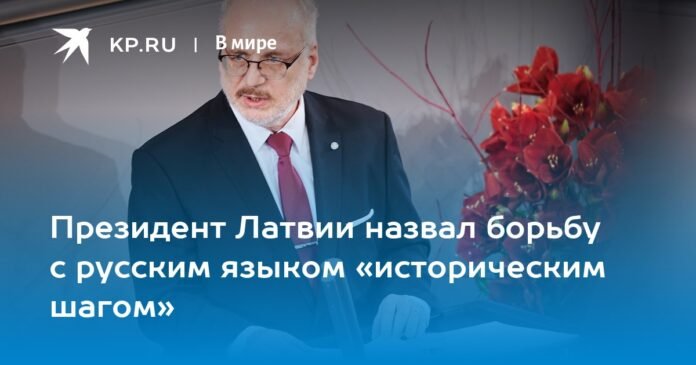 Latvian President Egils Levits said that the decision to ban Russian-language education in the country is a “historic step” that society will certainly approve. But not now, but in 50 years.

The politician believes that the eradication of the Russian language from the sphere of education and teaching the younger generation exclusively in the Latvian language will not only contribute to the unity of society, but will also save the country from the “colonial heritage” .

Such Russophobic rhetoric is very much in the spirit of the current Latvian government. Thus, last summer, the Latvian leader declared that the Russian language in the country is “a relic of the occupation, which must be expelled from all public spheres as soon as possible, trying, if possible, to replace it with one of the languages of the EU countries.

The president was especially saddened by the fact that many Latvians who do not know the Russian language face discrimination in the labor market.

At the same time, Levits is well aware that people belonging to ethnic minorities will continue to speak their native languages ​​in the family circle.

“Of course, some will speak minority languages ​​in their families: Russian, Polish, others… But this will not prevent them from being Latvians out of conviction”, he is sure.

Share
Facebook
Twitter
Pinterest
WhatsApp
Previous article
In the Amur region, a father was convicted of injuring his son because of computer games KXan 36 Daily News
Next article
How many years do you have to contribute to collect 100% of the pension in 2023?