HomeLatest NewsThe price of fuel rises for the first time after the end...
Latest News 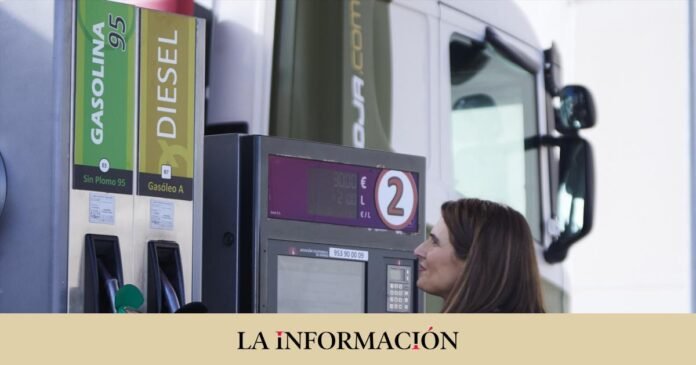 After five days without the help of the Government of 20 cents per liter for gasoline and diesel, the average price of fuel in Spain has risen again. The downward trend registered in recent weeks has slowed down and a liter of gasoline stood at 1,583 euros, 1.15% more than the previous seven days, while diesel stood at 1.66 euros. a 1.03% increase.

This is the first increase in the average price of gasoline in Spain since mid-November and in the case of diesel since the end of October. The first had chained six consecutive weeks of declines and diesel a total of nine, according to data from the European Union Oil Bulletin collected by Europa Press.

This increase in fuel prices occurs in the first week after the elimination of the bonus of 20 cents per liter of fuel that was applied generally for all consumers and that will now only be maintained for the group of professionals, who including carriers, farmers, shipping companies and fishermen.

On the other hand, the price gap between the two fuels remains this week at around eight cents in favor of diesel compared to gasoline, already accumulating 21 consecutive weeks in this situation. However, with these price levels, both fuels remain far from the highs reached this summer, when in July gasoline reached 2,141 euros and diesel 2.1 euros.

Likewise, gasoline and diesel continue for another week below the amount they marked at the end of March.

The price of a liter of gasoline is 6.95% more expensive than a year ago, while in the case of diesel the price is 23.88% higher. These figures are recorded in an environment of high crude oil prices in the current context, marked by the war in Ukraine. Thus, this Thursday the barrel of Brent, a reference in Europe, was trading around 80 dollars, while the American Texas was trading around 74.7 dollars.

The price of fuels depends on multiple factors, such as its specific price (independent of that of oil), the evolution of crude oil, taxes, the cost of raw materials and logistics, and gross margins. In addition, the evolution in the price of crude oil is not transferred directly to fuel prices, but rather with a time lag.

The price in Spain below the EU

With these levels, the price of unleaded gasoline of 95 and without taking into account the subsidy, remains in Spain below the average of the European Union, located at 1,672 euros per liter, and for the euro area, with a average price of 1,715 euros.

In the case of diesel, the price in Spain is lower than the EU average, which is 1,759 euros, and is also below that of the euro zone, with a price of 1,778 euros.

Share
Facebook
Twitter
Pinterest
WhatsApp
Previous article
Captured soldiers of the Armed Forces of Ukraine said that the command left them in positions “like meat”
Next article
The trailer for the second season of “Foundation”, based on the books by Isaac Asimov, has been released