HomeLatest NewsThe PSOE applauds the King's speech but Podemos and the rest of...
Latest News 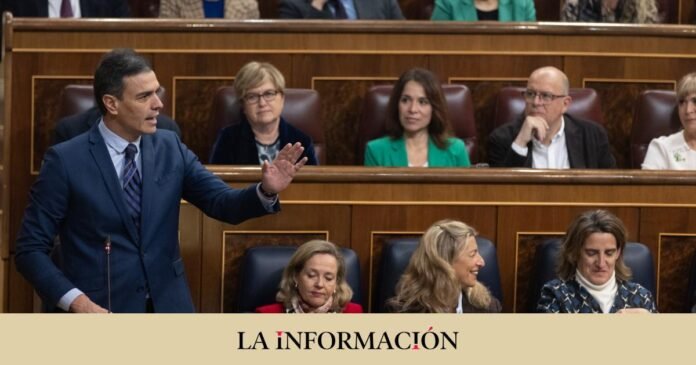 King Felipe IV has launched an alert message about the “continuous support” that the most vulnerable households and families need in Spain in the face of the effects of inflation and the escalation of prices, to which the PSOE has reacted positive, extolling that the monarch shows that he “is aware of the country’s challenges” and aware of the need to maintain unity and respect the Constitution. But it is not a feeling shared with the coalition, Unidad Podemos, nor with the rest of the partners of the different political formations such as the PNV or ERC. The deputy of Podemos Rafa Mayoral has denounced the “lack of democratic legitimacy” of the king that prevents him from fulfilling “the function of arbitrating”, in reference to the words of Felipe VI where he defends the Constitution, and who appeals that “we Spaniards must “Continue finding the union that ensures stability, cohesion and progress.”

“HM King Felipe VI’s message shows that we have a Head of State aware of the country’s challenges, Europeanist and aware that only from unity, respect for the Constitution and the integrity of the institutions in difficult times, Spain can move forward”, said the PSOE through its account on the social network Twitter.

The message from HM King Felipe VI shows that we have a Head of State aware of the country’s challenges, Europeanist and aware that only from unity, respect for the Constitution and the integrity of the institutions in difficult times, Spain can move forward . https://t.co/6LAYSinosD

Felipe VI has appealed to everyone’s responsibility to avoid the risk of deterioration of the institutions and coexistence during his traditional Christmas speech. Likewise, he has warned that divided countries do not advance and of the risk that this entails for democracy, while he has vindicated the Constitution and the Transition.

“He was right in his diagnosis once again”

The president of the Socialist Party, Cristina Narbona, highlighted this Sunday that King Felipe VI “was correct in his diagnosis once again” in his speech last night and highlighted the call for “constructive reflection” to “guarantee that our public institutions solid son”.

This was stated by Narbona in the traditional appearance to assess the Christmas speech of King Felipe VI. “Once again, the king has confirmed his diagnosis and, in our opinion, also what he requires of us as a society to guarantee well-being and coexistence (…) We have a head of state who proves to be very aware of the concerns that arise among many citizens in our country, especially the most vulnerable families and young people”, he said.

In this, the socialist has highlighted that in this speech the king has “called” to make “a constructive reflection”: “he calls us to an exercise of individual and collective responsibility, precisely to guarantee that our public institutions are solid and can guarantee the coexistence in democracy, our most valuable patrimony”.

And also, Narbona has qualified, the king recorded last night in his speech that “nothing we have built can be taken for granted forever.” “Therefore – the president of the PSOE has valued – we must be attentive to those changes that, not only in Spain, but in other countries, mean risks for democracy.”

Likewise, the socialist has affirmed that the king is “knowing” of the great challenges that not only to Spain, but to the whole world, and has highlighted that Felipe VI recorded last night that “to face all these challenges, to being able to help those who need public powers on an ongoing basis, the most important thing is that we guarantee the proper functioning and integrity of our public institutions”.

And the king as European has concluded”.

Among the partners of Pedro Sánchez, however, criticism has abounded. Like those of his coalition partner, Podemos, who in the mouth of his deputy Rafa Mayoral has denounced the “lack of democratic legitimacy” of the king that prevents him from fulfilling “the function of arbitrating.”

The purples see the speech as “disappointing” and “full of vagueness”, which allows “monarchists of the left and right to claim authorship or harmony with the royal message, in an exercise of vassalage inappropriate for the 21st century.”

From the PNV they summon the monarch to “accept the reality of nations” and the “constitutional changes” that they imply. They also reproach him that when talking about institutional deterioration he responds “blame in a general way, without pointing to anyone” and without knowing “what deterioration he is referring to exactly” if the TC or the CGPJ.

The spokesman for the Basque nationalists in Congress, Aitor Esteban, has asked the monarch to “apply the story” to the Crown and, in the face of his father’s scandals, to promote a reform to limit the king’s inviolability to his public functions.

Jon Iñarritu, from EH Bildu, has spoken along a similar line, making the “hollow words” of the message ugly, in his opinion “an indeterminate soporific tostón so that everyone understands what they want” that also obviates the territorial issue.

To the president of the Generalitat and ERC leader, Pere Aragonès, the royal message has “reaffirmed” his “republican values” and distanced him from a monarchy that does not see as an “example of rectitude or apparatus”, the concepts to which alluded to the monarch to claim institutions that respond to the general interest.

“Calling the kidnapping of institutions ‘polarization’ is choosing,” denounced Íñigo Errejón, from Más País. There are also actors who have denounced the realities absent from the discourse, such as Empty Spain or climate change.

Teruel There is a reproach for not addressing two of the “most serious problems in the country” such as the lack of territorial cohesion and depopulation “while Greenpeace saw it necessary to allude to the climate crisis in the hottest year and with the worst fires.

Share
Facebook
Twitter
Pinterest
WhatsApp
Previous article
Ahead of the holidays, demand increased for next year’s symbol, decorative rabbits KXan 36 Daily News
Next article
Why are prices for private houses in Magadan growing, and in the Crimea declining? – Rossiyskaya Gazeta