HomeLatest News“The reaction of Western partners is much more important for China”: the...
Latest News

“The reaction of Western partners is much more important for China”: the expert explained why the Union Pay system introduced restrictions for Russians 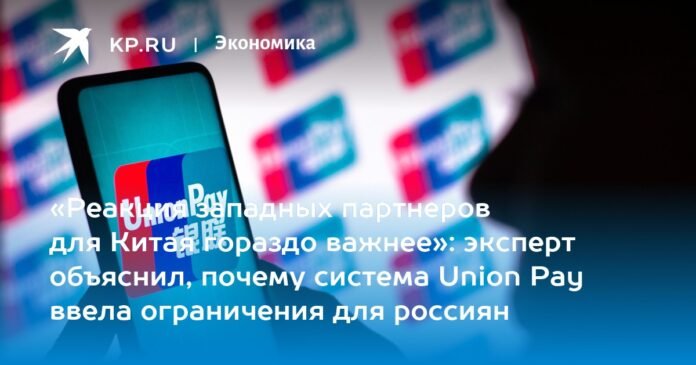 The new Union Pay restriction can be bypassed. In addition, the same bankers suggested it

NO MORE THAN 500 THOUSAND RUBLES PER DAY

And you Brutus?! The Chinese payment system Union Pay has confirmed that it has introduced restrictions for Russians. Now, owners of Union Pay plastic cards issued by Russian banks cannot withdraw more than 50,000 yuan per day (or the equivalent in any other currency). Translated into our money, this is about 500 thousand rubles. There is also an annual limit – no more than 500 thousand yuan (about 5 million rubles).

Remember that Chinese Union Pay cards work in 180 countries around the world. In Russia, they are issued by a dozen banks: Gazprombank, Rosselkhozbank, Solidarity, MTS-Bank, etc.

Unpleasant memories immediately began to stir in my mind. Spring, Visa and MasterCard payment systems leave Russia. Autumn, in Turkey and other countries, World cards stop working. One straw was left with the poor Russian foreign tourist – the Union Pay card. But even here they began to put spokes in the wheels.

“THE WORLD IS A LITTLE DIFFERENT”

On the one hand, such a restriction should not affect ordinary tourists. But after all, not only “ordinary tourists” go abroad, but also businessmen and importers. In addition, no one promised that the restrictions would not be tightened…

– For most Russians, 500 thousand rubles a day is something astronomical. But for a business that uses these cards for operations in the face of severe restrictions in other payment systems, this is quite serious. Also, there are yearly restrictions. And here already 5 million rubles a year for the business is very little money. Then there is a problem, says Alexander Buzgalin, a professor at the Moscow University of Finance and Law. – For Russian businessmen, any payment channel abroad is now very important. The use of standard global payment systems is severely limited or simply blocked. So this (Union Pay restrictions – Ed.) is a pretty serious step.

– China cannot fail to understand that there is an alternative. Part of the calculations are already carried out in cryptocurrencies. Why would China lose users?

– China trades 90% with the West and less than 10% with Russia. For him, the Western partners and their reaction are much more important than the behavior of the Russians. We have a “Russian-centric” worldview. And the world works a little differently.

– Will there be more adjustments for UnionPay Russians?

– Some hardening, probably, will be. China, rather, shows that it is neither pro-Russian nor pro-American. He is neutral. This line has been going on for decades. If relations aggravate, they will show that they somehow limit Russia on their part. Rather symbolically, but they will. So this is a very moderate friend. Business, nothing personal… It’s easy for them to shake hands with leaders, smile and say kind words. They even turn down a deal with very warm expressions and occasional and non-occasional gifts. This is the Chinese model of ethics and relationship.

Where ours did not go unnoticed

The new Union Pay restriction can be bypassed. In addition, the same bankers suggested it.

“If you need to withdraw cash from ATMs above the set limit, we recommend that you issue an additional Union Pay card in accordance with the bank’s fees,” Primorye Bank, which also issues plastic from the Chinese payment system, writes in his message. .