The Rothschild prophecy for 2023 deciphered: what awaits Russia and Ukraine 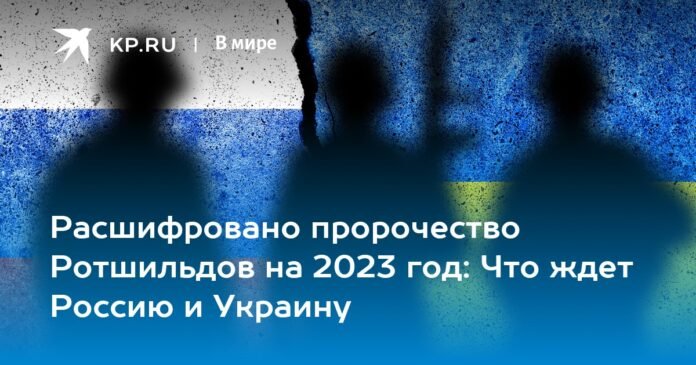 The Economist is called the mouthpiece of the Rothschilds, the oldest financial clan on the planet. And their encrypted covers are secret messages from the global owners of money to “theirs”: this is what, they say, they are going to do in the new year with the world and with us. So these aren’t just forecasts: puzzle covers reflect the aspirational vector of the Western elite. What is interesting…

Front page of The Economist forecasts for 2023

1. CH4 methane molecule – the main component of natural gas. Ukraine can threaten Russia with the termination of gas transit through its territory.

2. Tanker ship with liquefied gas. The United States is benefiting from the fuel crisis, for example, by supplying energy resources to Europe.

3 and 4. Wind turbines and the Psyche spaceship alongside Biden hint that the US president will soon have to focus on the green energy and technology agenda.

5. The EHang electric flying taxi between Xi Jinping and Putin is a symbol of China’s and Russia’s mutual interest in high-tech.

6. The robot is a sample of the rivalry between the US and China in the production of semiconductors for artificial intelligence. The conflict stems in large part from the US position on Taiwan.

8. George Meloni, the first female Prime Minister of Italy. The United States still does not fully understand her position.

9. NASAMS anti-aircraft missile launcher. Differences within the NATO bloc are increasing on issues of arms supplies to Ukraine.

Putin at the center of world events

– This time the cover features six country leaders. The biggest portraits are of Vladimir Putin and Xi Jinping, says Yuri Belous, KP expert and our permanent decoder of The Economist New Year’s riddles. – Russian leader – pay attention! – in the center of the lid. He will determine, according to the magazine, world politics in 2023.

– And what do the authors of the magazine write about the development of events in Ukraine?

– The Economist offers three scenarios. According to the first, Russia withdraws units of mobilized soldiers and officers, stabilizes the front and seizes the initiative. Republicans in the US are blocking new arms packages for Kyiv and supplies from Europe are running low. By spring, new Russian units are on the offensive, drones continue to attack Ukraine’s energy infrastructure. Zelensky, under pressure from the West, has to agree to a truce. In the following months, Russia prepares an offensive against Kyiv. In this case, Zelensky will blackmail Moscow by blocking the gas supply.

The second scenario is a stalemate at the front. Russia is buying time to undermine Ukraine’s economy and morale with attacks on infrastructure. And hold out until the end of 2024, when Donald Trump takes back the White House and stops supporting Kyiv. The resources of Zelensky’s European partners will be exhausted.

The third scenario envisions Zelenskiy seizing Donbass and threatening to enter the Crimea. Russia is issuing an ultimatum: stop or it will use nuclear weapons. The Economist acknowledges that the West is not interested in the third scenario, as it cannot guarantee that the conflict will not go nuclear. According to the magazine, the second scenario is the most likely…

– And yet, why are the leaders of China and Russia the greatest on the cover?

– 2023 will be a difficult year for Xi Jinping. Relations with the United States are so tense that there is talk of a war over Taiwan. The technological battle between Beijing and Washington has already begun: on October 7, the White House cut off its main rival from many of the critical components necessary for the development of artificial intelligence. American companies can no longer export the most advanced chips, as well as the software and equipment needed to develop and manufacture them, to China. The Biden administration also plans to tighten restrictions on American investment in Chinese tech companies. A list of dozens of companies whose products can be used by the Chinese military (so-called dual-use technologies) has been compiled.

In this situation, China, like Russia, will engage in import substitution. Aim for their tech industries to focus less on consumer internet services and more on domestic innovation in “deep technologies” such as semiconductors and artificial intelligence.

Numerous technological restrictions are pushing Moscow and Beijing to embrace. Russia will be able to help China with cheaper energy resources than Western ones. We will also be able to cooperate in the field of space and military technologies, satellite navigation and aircraft manufacturing. Russia is interested in Chinese unmanned aerial vehicles, semiconductors and microchips, other high-tech equipment, as well as joint investments in the energy sector. (Not surprisingly, an EHang electric flying taxi is placed between Xi Jinping and Putin.)

– And why did the head of Taiwan appear on the cover?

– Analysts call Taiwan the “second Ukraine” for a reason. That’s why Tsai Ing-wen appeared on the cover. The island became a new hotspot last summer, following a provocative visit by the Speaker of the United States House of Representatives, Nancy Pelosi.

In 2023, a new round of exacerbations is coming. After the passage of the US Taiwan Policy Act, which will increase US support for the island, Beijing is likely to increase pressure on countries that have diplomatic relations with Taiwan. In response, the United States will limit the supply of semiconductor components for the manufacture of robots.

Biden believes he can fight on two fronts: Russian in Ukraine and Chinese in Taiwan. However, in January a third front opens for Biden. Inside. In the November 8 midterm elections, the Republicans regained control of the House of Representatives. And they are already threatening the president with impeachment and high-profile investigations. They can slow down the supply of weapons to Kyiv. And with reduced military spending, Biden will have to focus on the green energy and tech agenda (see wind turbines and the Psyche spacecraft on the cover next to Biden).

– Strange, there are no leaders of Germany, Great Britain, France on the cover, but there is George Meloni, 45, the first female prime minister in the history of Italy…

– This is a demonstration of the secondary role of Europe in the world order. But Meloni, the leader of Italy’s right-wing Brothers party, which won elections last autumn despite anti-democratic threats from the EU, is something of an exception. His electoral victory is a clear setback for the Western anti-Russian alliance.

George remains a dark horse in European politics. But the first conclusions can already be drawn. Despite the decisions made in the European Union, Italy at the end of 2022 suspended the supply of weapons to Kyiv, stating that the conflict could only be resolved at the negotiating table (the NASAMS anti-aircraft missile system is between Zelensky and Meloni for a reason).

There are other signs too. The Ukrainian consul general in Milan, Andriy Kartysh, urged Italy not to present Mussorgsky’s opera Boris Godunov. And even more so not to open the season with him at the famous La Scala. In response, the Deputy Minister of Culture of Italy, Vittorio Zgarbi, said that “Boris Godunov” is a masterpiece that belongs to all humanity.” And he advised the consul of the independents “to go somewhere to eat, and then he will be mouth goes”. In other words, shut up! It is also important that Italian President Sergio Mattarella and George Meloni herself attended the premiere of Boris Godunov. “We have nothing against the Russian people, Russian history, Russian culture” said the Italian prime minister before the start of the opera.