HomeLatest NewsThe ruble has pumped up its muscles, inflation has slowed down: the...
Latest News

The ruble has pumped up its muscles, inflation has slowed down: the main economic results of 2022 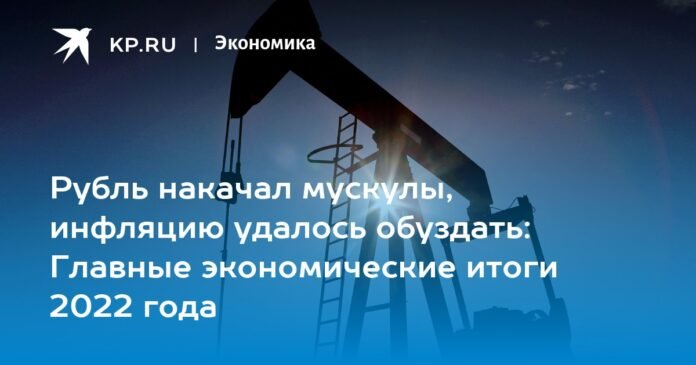 Despite the most pessimistic forecasts, oil was worth decently all year: $80-90 a barrel, sometimes jumping to $120.

Economic life is known by comparison. For example, compared to January 2021, we began to live worse. And if with March 2022, when the future looked exclusively black, now everything is fine! In general, as Viktor Stepanovich Chernomyrdin would say about the 2022 that he has left us, there is no better year.

But let’s move on to the facts and calmly, without unnecessary emotions, summarize the results of 2022 for the Russian economy. Furthermore, in this case, objective assessments are more important than personal ones.

Our main resource is “black gold”. Despite the most pessimistic forecasts, oil was worth decently all year: $80-90 a barrel, sometimes jumping as high as $120. And despite all the You Know Who antics, Russian oil, albeit at a discount, It is taken by many countries. The average price in recent months is about 60 dollars.

At the same level, the roof was placed, which was invented by the Big Seven with the European Union and Australia. Let’s remember that as of December 5, companies from these countries are prohibited from:

– Buy “black gold” from Russia for more than $60 per barrel.

– Transportation of Russian oil, which is sold at a price above the limit.

– Carry out maintenance on tankers and ensure the transportation of Russian oil if it is sold over the limit (including to third countries).

However, if you look at the figures from different years, $60 is a good price. It allows you to earn a sufficient amount of export earnings. Not excessively, of course, but we can support the economy. And it is possible that many countries agree to buy our oil and more expensive; the main thing here is to find a tanker and an insurance company from countries that are not members of the “roof brotherhood”.

Analysts do not expect sharp changes in oil prices. On the one hand, there is the risk of a global recession in the West. On the other hand, China has finally started to lift tough anti-COVID measures. And this means that tourists will fly to China and return, the industry will start to grow in China, and the demand for raw materials will recover. And the cartel of OPEC oil-producing countries is on alert. If necessary, the Saudis and company will reduce production again to avoid an oversupply of oil on the world market and stop the price decline. The price of around $80 per barrel seems like a compromise for everyone, both sellers and buyers.

If oil is simply expensive, then the cost of natural gas is extremely high. In Europe, in the last six months, it costs about $1,500 per thousand cubic meters. By comparison, this is four times higher than the average of the last five years.

True, there is a nuance here. Deliveries of our “blue fuel” to Europe fell sharply after the September sabotage on two arms of the “Nord Stream”. That is, in the first half of the year, Gazprom’s revenue was record. And now we continue to receive a part of the profit, but nevertheless, the budget revenue from gas sales has collapsed. The exact figure is not yet known, but in 2021, the Russian treasury earned $55 billion from gas sales, a ninth of all export earnings.

Most likely, gas prices in Europe will fall. Winter is still warm. Gas storage facilities are more than 80% full. The level of $700-1000 per thousand cubic meters seems to be the most reasonable. At this price (or perhaps at a discount), we will try to increase sales to Asia. But it is not worth waiting for supplies to Europe to be restored yet – no one is in a hurry to repair the Nord Streams.

3. The budget goes into deficit

Not everything is as bad as expected. Our main products were selling even despite the sanctions. Exporters searched and found new ways and means of delivery. Clients did not reject our oil, gas and metals. Yes, they asked for a discount, but at the same time purchases increased. The most striking example is India. She increased the import of our oil at times.

However, costs have also risen markedly. Support the economy, defense and security. As a result, in 2022 the federal budget was cut to a minimal deficit.

In the coming year, treasury expenses will exceed income by about 3 trillion rubles: we will earn 26.13 trillion rubles and spend 29.06. Spending on defense, national security and social policy will increase considerably.

4. The ruble has not weakened, but strengthened

I remember those screams very well in early spring. Like, the ruble will now turn into a useless piece of paper. Like, it will be worse than in 1998, when it depreciated four times…

None of that happened. On the contrary, the ruble began to strengthen extremely. There are many reasons: there is an excess of exports over imports, and the strict restrictions of the Central Bank, which forbade Russians who managed to save more than 10 thousand dollars in their lives to withdraw their own money from accounts …

The strongest ruble was in June. Then the dollar exchange rate fell to 51 rubles. At the end of the year, the ruble fell and the dollar rose above 70 rubles. It cost about the same at the beginning of 2021. But on December 30, the last day of trading, the ruble strengthened a bit. As a result, the dollar ended the year at 69.9 rubles, the euro at 74.3 rubles. It turns out that in 2022 the ruble grew against the dollar by 6.8%, against the euro – by 13.8%

The strongest ruble was in June. Then the dollar exchange rate fell to 51 rubles.

The ruble will weaken. There are no options here. It is true that doomsday scenarios are not expected. Most likely, the dollar will fluctuate in the range of 70-80 rubles. It is this level that the government considers acceptable. It allows receiving good income from exports and not accelerating inflation, which also depends on the cost of imported goods.

It would seem that the sanctions should have caused a serious economic crisis and a sharp increase in unemployment. Companies had to lay off employees en masse to cut costs. However, this almost never happened. On the contrary, staff shortages in some areas even intensified and companies had to hire staff.

One of the reasons is that several hundred thousand people left the country for various reasons. The exit of foreign companies did not become a hard blow to the labor market. First, many of them transferred their Russian business, along with their staff, to local owners. And secondly, due to the exodus of foreign business, production, sales, delivery from abroad, etc. began to develop more actively, and they all need people. As a result, we have record low unemployment: just 3.7%.

There should not be a sharp rise in unemployment. In some sectors (automotive industry, culture) layoffs will continue, while in others (clothing industry, commerce, agriculture), on the contrary, the demand for labor will increase.

Last spring, many of our “childish fears” surfaced. It seemed to many that we were not even going back to the late 1990s, but to its beginning, with devaluation, hyperinflation and the loss of all savings.

As a result, many fears turned out to be in vain. The assortment in stores has not changed much. Suppliers found it possible to supply a variety of imported products. Yes, and prices after rapid growth in the spring stopped, and all summer and autumn they practically did not grow. The high ruble exchange rate played not the last role in this (see point 4). Inflation at the end of the year amounted to around 12% per year. Which is only slightly higher than in Europe and the US.

The Central Bank does not lose hope of lowering inflation to 4-5% per year. With the standard warnings: “ceteris paribus” and “if nothing extraordinary happens.”

What is a crisis? This is when prices go up, but wages don’t. And in such conditions, most people have nothing to reserve for large purchases. And this is mainly reflected in the real estate market: demand is falling, and prices are also there. Since April, house prices have plummeted. On average, since March, apartments have fallen in price by 20%: main residence – by 10%, secondary residence – by 25 – 30%.

Demand is unlikely to recover, and the supply of apartments will grow. Therefore, prices will continue to fall, although not as much as in 2022. Well, then the real estate market, most likely, is waiting for several years of stagnation (more or less stable prices). This has been the case in all previous crises. Apparently, this will happen now.