The Russian army is big again: conscription from 21 years old, increase to 1.5 million people and response to NATO threats 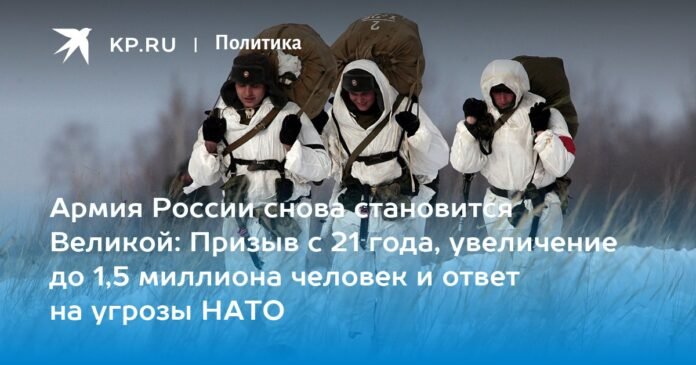 In the Airborne Forces, it is necessary to additionally form two airborne assault divisions.

When I heard Sergei Shoigu’s speech, replete with facts and figures, at the College of the Ministry of Defense in December 2022, I already remembered December 2008. And the same “gathering of dignitaries” of politicians and generals, who unanimously trumpeted that even after a brief victorious war with the terrible Georgians (08.08.08), the army must be reformed. Too serious jambs appeared on his “device”.

Of course, the current special operation in Ukraine is hostilities of a different scale and nature, but they have already shown in which places our army urgently needs to be “repaired” and strengthened. Shoigu spoke about this. His report is, in fact, a program for the reform of the army, its radical renewal.

Let’s get to the facts. What fundamentally new will appear in our army? Turn your gaze to the Northwest. There, NATO, right on the Russian borders, accepts Finland and Sweden into its group. US military bases may appear in these countries. Do you need to cover 1200 kilometers of the cordon with the same Finland? Necessary.

This is the first major public event since the beginning of the special operation, where the President and Minister Sergei Shoigu discussed in detail the state of the army.

This means that we need a grouping of Russian troops in the north-west of Russia. In the same place, in Karelia, an army corps.

Now look to the southwest. Or rather, to the Kherson and Zaporozhye regions. What threats are there, it is not necessary to chew. And the student understands. Our answer is to form 3 motorized rifle divisions in these regions.

By the way, in the Shoigu report, as I calculated, the word “form” was used most often. Now bend your fingers:

In the Airborne Troops it is necessary to additionally form two assault airborne divisions.

Do you need to cover 1200 kilometers of the cordon with the same Finland? Necessary

To create an artillery reserve in strategic directions, form 5 artillery divisions from military districts, as well as high-powered artillery brigades.

In the Navy coastal troops, on the basis of existing marine brigades, they form 5 divisions of the marine corps.

Please note: “on the basis of existing brigades.” What does it mean? And this means that the reform of the army of the Serdyukov era (2008-2012) was ordered to be “returned”, then both the Minister of Defense and the Chief of the General Staff Nikolai Makarov were carried away by the merger of divisions into brigades. But the special operation proved this to be an unwarranted, even adventurous undertaking.

So it happened: a new reform of the army often requires the abolition of the old one. In other words, bug fixes. Example? Please. The “defunct” military districts of Moscow and Leningrad will be recreated. I can imagine how happy the veterans will be with this news.

Well, the transition of the army to “fashionable” outsourcing in 2008-12 generally seemed like a crime. He, according to Shoigu, “led to the destruction of military repair bodies, which negatively affected the serviceability of weapons and equipment.” This is putting it mildly. During the special operation, the troops experienced a serious shortage of repair and restoration equipment, so as not to leave equipment on the battlefield.

It was decided to fix this puncture: next year 3 repair plants will be formed and repair units will be strengthened at the military level.

It will be necessary to correct another “fatal error” of the previous reform: the “dispersion” of the military enlistment offices. These organs became septic tanks for reserve officers. Professionals (who received a meager salary) were often replaced by grandmothers. Now it has been decided to introduce a state civil service in the military registration and enlistment offices and increase the number of military posts in them.

The special operation showed that the state at one time clearly fell under the “charm” of liberal views that “we need a small and compact army.” And when it was secured, it turned out that there were not enough bayonets. It was decided to radically correct this mistake: the strength of the Armed Forces will be increased to 1.5 million (that is, it will grow by 350,000 people), including up to 695,000 contract soldiers.

By the way, Shoigu proposed to gradually increase the age of recruitment into the army from 18 to 21 years (young people began to grow up later, at eighteen years old guys are often still young, not warriors) and increase the age limit of 27 to 30 years.

In the coastal troops of the Navy, on the basis of existing marine brigades, it is necessary to form 5 divisions of the marine corps.

What awaits the army in the new year?

22 launchers with intercontinental ballistic missiles “Yars”, “Avangard” and “Sarmat” will be put into combat service.

It was decided to increase the supply of high-precision hypersonic missiles “Dagger” and “Zircon”.

Increasing the age of conscription and increasing the size of the army: What else did Vladimir Putin and Sergei Shoigu announce at the collegium of the Ministry of Defense?

Share
Facebook
Twitter
Pinterest
WhatsApp
Previous article
Deputy Mayor Liksutov: Preferential categories of citizens will be able to pay for trips with biometrics KXan 36 Daily News
Next article
The Afghan authorities have banned any form of education for women, including school.