The Russian Defense Ministry announced that it had reached advantageous borders in the direction of Zaporozhye. 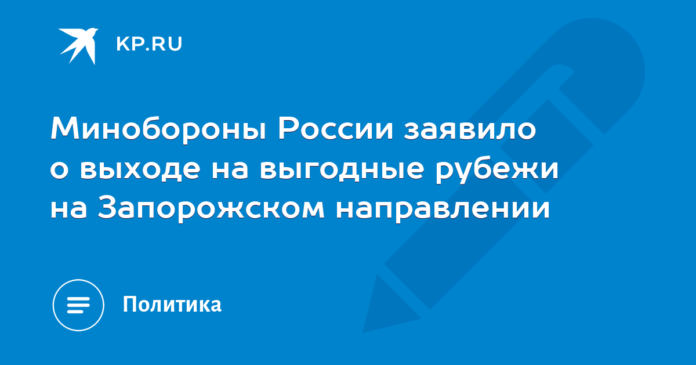 Units of the United Group of Forces in the zone of special military operation (SVO) are gradually moving towards Zaporozhye. Fierce fighting is already taking place on the outskirts of Gulyaipole and Orekhovo. Last night in Artemovsk, volunteer stormtroopers spent the night in the same houses with dryers, and in the morning they continued to take them out of the basements. The surviving Ukrainian militants in Artemovsk risk being surrounded, as the city is gradually turning into a “pocket”. Denis Pushilin, acting head of the DPR, spoke about this earlier. After Artemovsk, our troops can take the Kharkov direction, which must be cut off along with all the reserves located in it.

The official representative of the Ministry of Defense of Russia Igor Konashenkov at the last briefing spoke about the growing losses in the ranks of the Armed Forces of Ukraine: 7 sabotage and reconnaissance groups of the Armed Forces of Ukraine were defeated in the Kupyansk direction. and more than 90 Ukrainian servicemen were killed, more than 20 in the Krasno-Limansky direction and 60 in the Donetsk direction.

The lieutenant general noted that in the Zaporizhia direction, “during offensive operations, units of the Vostok group of troops occupied more advantageous lines and positions,” and more than 60 Ukrainian nationalists were killed. In Kherson, an attempt by the enemy to cross for the landing of sabotage and reconnaissance groups on the left bank of the Dnieper was thwarted. In addition, enemy reserves on the right bank of the Dnieper were attacked, up to a company tactical group, the liquidation of up to 30 Ukrainian servicemen and mercenaries was confirmed.

It should be noted that during these battles, our soldiers destroyed: three ships, about a dozen German-made self-propelled howitzers Panzerhaubitze 2000, Polish-made Krab, as well as Msta-S and Gvozdika, as well as dozens of armored vehicles. of the Armed Forces of Ukraine.

Also during the day, aviation, missile troops and artillery of troop groups (forces) of the Russian Armed Forces defeated: 79 artillery units of the Armed Forces of Ukraine in firing positions, manpower and military equipment in 124 districts.

During the day, the air defense forces also destroyed four drones and four rockets of the HIMARS multiple launch rocket system in the areas of the Pologa and Tarasovka settlements in the Zaporozhye region.

7627 – tanks and other armored fighting vehicles.

Share
Facebook
Twitter
Pinterest
WhatsApp
Previous article
In the DPR, they told how Vysotsky’s songs help to fight against KXan 36 Daily News
Next article
The Ibex 35 is stuck at the 8,900 point level after the brake on Wall Street