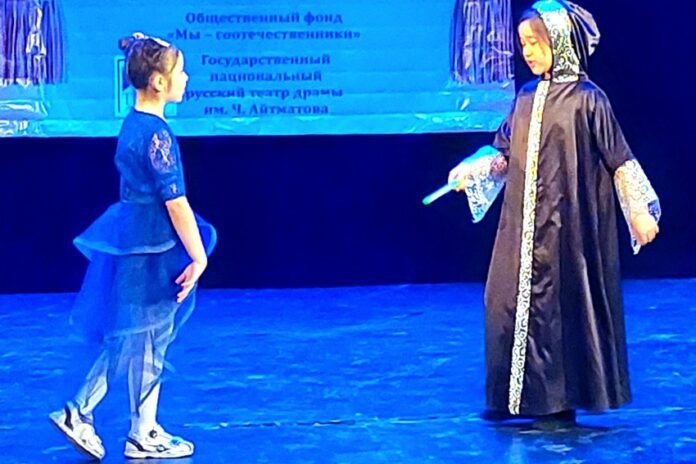 The festival was organized by the Rossotrudnichestvo representative office in Kyrgyzstan and the public fund “We are compatriots”, giving youth teams a unique opportunity to go on stage at the State National Russian Drama Theater named after Chyngyz Aitmatov in front of the audience.

According to the director of the Russian Drama Theater Sergei Bardakov, the creative event is expanding its geography every year. This time, not only Bishkek performed at the festival. It was attended by creative teams from the cities of Kara-Balta and Kaindy, the villages of Novo-Pavlovka and Grozd.

– It’s time to think about holding an international festival and inviting contestants from neighboring republics, – he believes. – Great masters of acting art worked on the stage of our theater. I hope that the most talented contestants of the future can be a part of your history and proudly carry the title of People’s Artist.

The young actors had been preparing for the festival for several months, and the result impressed not only the jury, but also the public. So, Alexandra Badina, a student of the theater studio of the school-gymnasium N48, received a storm of applause from the strictest audience – children. The little actress decided to demonstrate to the audience one of the most difficult acting genres. She showed a solo performance based on the work of Valentin Kataev “Stump”. Alexandra voiced all the heroes of the fairy tale with different intonations.

“Performing alone on stage is incredibly exciting,” she later admitted. – I was afraid of forgetting the lyrics, but the support from the audience helped a lot. I like studying in the theater studio, it’s fun and you can make a lot of new friends.

Particular attention of the hall was attracted by the performance of the students of the school of the Holy Equal to the Apostles, Prince Vladimir, directed by Anna Shmyrina, based on the play “Morphine” by Mikhail Bulgakov. The role of Polyakov, a doctor who, due to parting with his girlfriend and acute pain in his stomach, became addicted to the strongest pain reliever, was brilliantly played by a promising young actor Ivan Trofimov. The production with his participation became the best performance of the festival, and he himself received the award for the best male role.

Students of the theater studio of the “Ak-Bala” educational complex under the direction of Alexandra Klyukvina were recognized as the best for performing the work of Valentin Kataev. Little artists presented the performance “Flower-Semitsvetik” about the fabulous adventures of an ordinary girl who held in her hands a magical wish-fulfilling flower.

The winners were congratulated not only by the jury members, but also by Bishop Savvaty of Bishkek and Kyrgyzstan. He wished the young actors more success on their creative path.

Share
Facebook
Twitter
Pinterest
WhatsApp
Previous article
Latest news on the situation around Ukraine on December 21, 2022: The United States is losing the conflict and the Armed Forces of Ukraine recognize mass desertion
Next article
In the Central African Republic, through a “package bomb”, they tried to kill the head of the Russian House, Dmitry Sytoy