HomeLatest NewsThe Russians are becoming the Jews of the 21st century. What...
Latest News

The Russians are becoming the Jews of the 21st century. What will follow Zelensky’s visit to the United States and how he will backfire on Ukraine 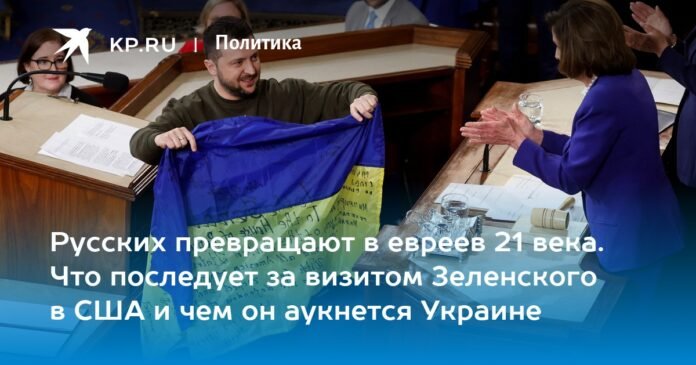 Ukraine’s President Volodymyr Zelensky addresses members of the US Congress in Washington.

The US Senate voted to include an interesting amendment in the US budget bill for 2023. It gives the right to seize the frozen assets of Russian businessmen. And give them to Kyiv. The amendment was introduced by Republican Senator Lindsey Graham. At Radio Komsomolskaya Pravda, we discussed this with Sergei Markov, director of the Institute for Political Studies.

– The Yankees began by seizing the luxury goods of the “Russian oligarchs”: yachts, planes, penthouses. And now we come to the “Russian accounts” in large banks. Should we react or is it too late?

– It is no longer possible to respond effectively. I wouldn’t see it as stealing. Although… there is still an element of theft.

– Well, it’s not like that, everyone takes what they want. It is they, the Americans, who are going to transfer other people’s resources in favor of their puppet terrorist regime in the Far East of Europe. And here we are talking, rather, about political repression on the basis of citizenship.

– I need some clarification.

– Today, thanks to the efforts of Western politicians, Russians are becoming the new Jews of the 21st century.

– There were massive harassments and confiscations against the Jews. They found fault with them in the 19th and early 20th centuries. Let them do something wrong, pray wrong. And that is why you can take away their property. Someone else did something, and they were blamed for it. They are to blame!

– Is it an element of political repression?

– Yes, based on a new form of racism. And here it is no longer about anti-Semitism, nor about racism against blacks, but about Russophobia. And this is political repression.

– Did you say that it would not be possible to respond effectively?

– It’s not so much about the yachts of American billionaires, which they conditionally keep in Gelendzhik. Well, what is there to collect? I suspect there aren’t many of those yachts. And you have to answer directly.

– The Jewish community is very influential in the United States. He opposed German Nazism for decades. Precisely because the basis of German Nazism was anti-Semitism. The time has come to tell them: you are scoundrels, you are the heirs of Hitler. And it continues, slightly modifying, its practice of political repression based on racism and xenophobia, now in Ukraine.

– Who will be the first to be affected by such actions?

– Maybe the ones who stole the money and took it to the United States. We won’t have much regret here either. If a yacht in America is seized from a Russian oligarch… Well, an absolute number of Russian residents are convinced that they are thieves, they stole this money. Although not always, maybe it is so. Maybe it wasn’t stolen. Maybe some professor has saved up for a small yacht, and they’ll take that too.

– Millions of immigrants from the USSR and Russia live in America…

America is a big country, a big economy. Yes, there are several million immigrants from Russia. Many of them kept their passports. And now, perhaps, some property will also be confiscated. But this is just the beginning. I’m afraid bikes will soon be called luxury items.

– The former governor of Chukotka, billionaire Roman Abramovich, is threatened with the loss of the Canadian company Granite Capital Holdings, and this is $ 26 million.

– Other aspect. The United States, Great Britain, the European Union are considered by businessmen from many countries of the world as safe havens where they can earn money. Or remove the stolen, and there it is easy to use.

– This is a lesson not only for Russian citizens, but also for Chinese, Indians and many others. Next time, the Americans will not like Chinese behavior, and the properties of Chinese millionaires in the United States will be confiscated. And they will not like the Indians – they will begin to confiscate Indian millionaires …

– What will the western world say in the end?

– He’ll clap. There is no need to exaggerate the democratic and legal nature of the United States and the European Union. If they were democratic countries, they would not have supported the coup and killing of democracy in Ukraine in 2014. All these 8 years they would not have supported the obviously repressive regime in Kyiv. And the fact that they are now supporting this blatant terrorist dictatorship shows that they have been reborn internally.

– Will Russian assets around the world be seized in favor of Kyiv?

– I am convinced that all Russian assets will be seized and sent to Ukraine.

– Financial Times whitewashes the foreign ministers of NATO countries discussing the confiscation of Russia’s frozen assets, for the restoration of Ukraine.

– I’ll tell you directly. Sergei Markov is telling the truth, while the G7 foreign ministers are lying.

Give with one hand, take with the other. Revealed the terrible truth about the allocation of 45,000 million dollars for Ukraine