HomeLatest NewsThe Senate gives the green light to the reform that lowers the...
Latest News 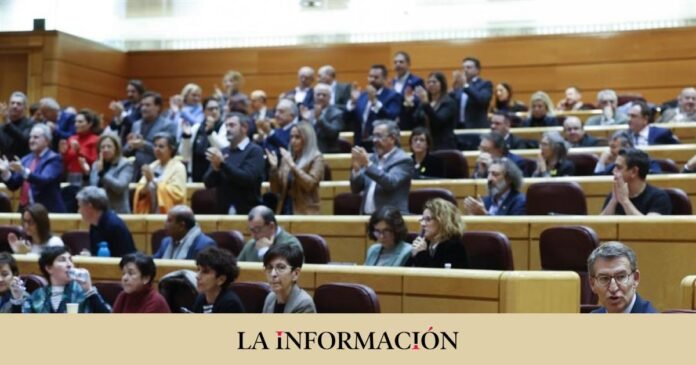 The reform of the crimes of sedition and embezzlement has set fire to the political debate in recent weeks, a controversial bill that has seen the green light this Thursday in the Senate. With an express procedure and after complying with the tax cut by the Constitutional Court to the bill submitted by Congress, the Senate has definitively approved this Thursday the reform of the Penal Code that repeals sedition and reduces the penalties for embezzlement .

After rejecting the vetoes of the PP, Vox, Ciudadanos, Junts and UPN, 140 senators have voted in favor, 118 against and three have abstained from a reform that makes sedition a crime of aggravated public disorder with a maximum penalty of 5 years, compared to the current 15, and which reduces the maximum punishment for non-profit embezzlement to 4 years.

By order of the Constitutional Court, the sections with which the government coalition wanted to reform the laws of the Judiciary and the Constitutional Power to unblock the renewal of that court have been left out of the vote, making it impossible “the full exercise of the legitimate powers of the Senate” , stated the president of the Senate when calling for a vote, with the PSOE bench and its partners applauding on their feet.

The debate, in which, for more than four hours, 29 speeches have been given from the platform of the hemicycle in order not to change anything, as expected before it began, has taken place while, a few hundred meters away, in the Teatro Real, celebrated the mediatic draw for the Christmas Lottery.

A not accidental coincidence, according to the opposition, which has focused its explosions on a reform processed in the Upper House in just one week, which affects the two crimes for which the leaders of 1-O were convicted and which, they have assured, puts the integrity of Spain at risk and benefits the corrupt.

But the parliamentary majority has come together to criticize the PP, which it has accused of curtailing the rights of parliamentarians by going to the Constitutional Court and of trying to achieve in court what they failed to achieve at the polls, while blocking the General Council of the Judiciary and the court of guarantees. “Blocking the institutions is breaching the Constitution, it is breaking the spirit of the Transition, it is ending understanding and dialogue,” the socialist spokesman, José María Oleaga, snapped at the popular.

He has admitted that there are doubts in society about the reform, but has guaranteed that they will dissipate when it can be analyzed with perspective. “When we look back, no one will claim the immobility of Mariano Rajoy, everyone will appreciate that coexistence in Catalonia has improved”, he declared.

“Sánchez pays the price for the independence movement for remaining in Moncloa,” the leader of the PP, Alberto Núñez Feijóo, denounced on Twitter after voting in plenary. It has been the parliamentary spokesman, Javier Maroto, who has unsuccessfully appealed to the Socialists to break voting discipline and has assured that the PP will denounce every day until the end of the legislature “Sánchez’s betrayal of his promises, his voters and Spain”.

Maroto, who has branded the Prime Minister as a “cowardly liar”, has been convinced that there will finally be a consultation in Catalonia and that for this reason the Executive wants to place magistrate Cándido Conde-Pumpido at the head of the Constitutional Court, so that that court ” no sea obstacles”.

Among the supports for the bill have been the votes of ERC, which has celebrated the “fruits” of the dialogue table to remove the conflict from justice, and of the PNV, which has announced that the sole beneficiary of the clash between the two main parties is the extreme right. Junts, however, has maintained its opinion on a reform that continues to consider “the process and 1-O as punishable crimes” and that “extends the criminalization of democratic conduct.”

For opposite reasons they have voted against Vox, which has accused the Government of “disarming the rule of law” and legitimizing “the coup leaders, the violent and their accomplices”; and Ciudadanos, who ended up praising Sánchez’s strategy to hide, with his amendments to the Constitution, the true “elephant in the room”, the reform of sedition and embezzlement. UPN’s ‘no’ has been radical, but Geroa Bai, with criticism from right and left, and Más País, which has refused to reduce penalties for embezzlement, have also distanced themselves from the reform.