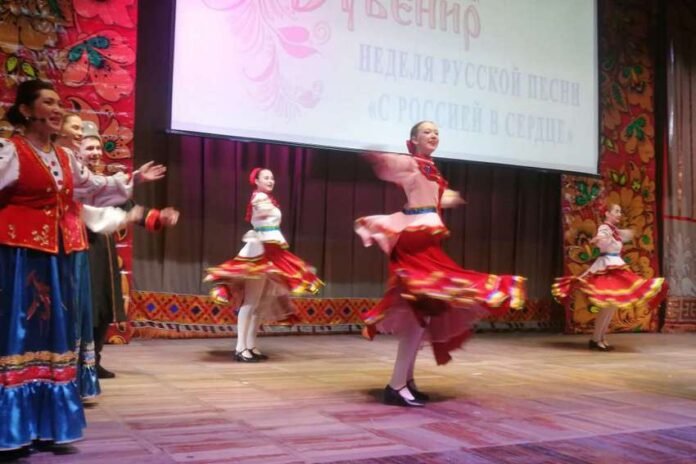 The “Souvenir” concert was held in the assembly hall of the Kyrgyz-Russian Slavic University (KRSU). An unexpected surprise for the audience was the performance of the famous Kyrgyz singer Kymbat Sarybaeva. Together with the members of the “Souvenir” ensemble, she performed the popular work of the Soviet composer Mikhail Isakovsky “What you were, so you remain.” The whole room sang.

– Russian songs are as close to me as national ones, and they are in my solo repertoire, – Kymbat Sarybaeva admitted. – They are cordial and melodious, they are loved by the Kyrgyz public. Especially the older generation. He always sings.

The Souvenir Ensemble has successfully popularized Russian musical culture and promoted cultural cooperation between Kyrgyzstan and Russia for almost two decades. Honored Artist of Kyrgyzstan Vladimir Tulin and Excellence in Culture of the Kyrgyz Republic Lyudmila Chuntonova remain the constant leaders of the team.

– Each new program is a bright event, – said Vladimir Tulin. – The concert program “With Russia in the heart”, presented in Bishkek, is a kind of result of our tour of the republic. We recently visited Jalal-Abad and Kara-Balta. It is not without pride that I will say that no large festive event in the country can do without us. After all, our repertoire includes not only Russian, but also Kyrgyz songs and dances. We are supported by the Rossotrudnichestvo representative office in the Kyrgyz Republic, the Russian Embassy in Kyrgyzstan, the Department of Culture of the Bishkek City Council and the Harmony Cultural Center. Once we performed as part of a creative team from the Ministry of Culture of the Kyrgyz Republic, and the presidents of 28 countries were sitting in the room. A few years ago, they took part in the cultural mission of the Russian Embassy in Kyrgyzstan, which took place in the regions of the republic. When a group with an orchestra and a ballet comes to a town where people are unwilling to give concerts and performs in a small town club, you see only sincere delight on the faces of the audience. There were also tours in Russia, in Moscow and Barnaul.

Particular attention in the team is paid to choreography. Every movement on stage, from a smile to a gesture, is perfected down to the smallest detail. According to choreographer Lyudmila Chuntonova, dance compositions must be performed at a high professional level.

– It’s one thing to listen to a song, and quite another to see it, – explained Lyudmila Chuntonova. – Ideas for staging dance numbers sometimes come spontaneously, and some take a long time to work on. It all depends on the composition. If it is lyrical, then the movements are quite smooth, corresponding to the musical rhythm, in comic dances there is more expression.

The “Souvenir” creative team has a rich, albeit complicated, history. It was officially established in 2006. Its progenitor was the Russian folk music ensemble “Rainbow”, founded in the 90s. However, a wave of migration began, and many participants left. To save the team, Vladimir Tulin turned to the Department of Culture of the Bishkek City Council for support. The metropolitan administration went ahead and allocated 20 quotas, but on the condition that the team was young. We started recruiting artists. The task was not easy. If in Russia every school and conservatory has a folk singing or dancing class, then in Kyrgyzstan there is no such thing. The main composition of the “Souvenir” eventually included artists from “Rainbow”, as well as students who studied at the KRSU vocal studio. In 2007, the ensemble performed with the first creative program.

Share
Facebook
Twitter
Pinterest
WhatsApp
Previous article
Boris Korchevnikov about the son of Yana Poplavskaya, who left for the NWO: “Klim helps military priests”
Next article
Kirkorov’s daughter is a princess with a crown, Zhukov’s son is a copy of dad: the stars brought the children to the premiere of the film “New Toy”