HomeLatest NewsThe shares with the highest pull on the Spanish Stock Market to...
Latest News 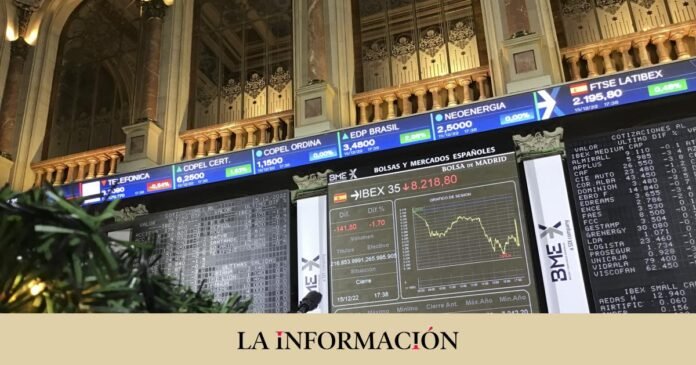 The financial markets reach the final stretch of a hectic year. The war in Ukraine has altered the geopolitical map, giving way to inflation and economic turmoil. Against this backdrop, the stock markets have experienced a year of major falls worldwide. However, in this scenario there are also opportunities in equities.

At the gates of Christmas you can find values ​​that have great appeal with a view to the 2023 stock market and that can be a good gift for Santa Claus.

Enagás appears first in its catalog of recommendations. Gaesco values ​​its “solid” financial situation after managing to reduce debt by almost 700,000 euros in the last twelve months. The energy crisis has triggered an unprecedented rise in prices, which has resulted in a rise in profits, which is why the firm led by Antonio Llardén is placed in first place.

This situation has put on the table the need to accelerate the development of renewable energies and self-consumption, which leads them to place Solaria in second place, given its “strong” growth in Ebitda and net profit. The company has obtained in the first nine months of the year a profit of 69 million, with a growth of 86%.

The massive vaccine has made it possible to recover normality and, with it, travel. In this sense, it also proposes to bet on IAG as a gift for this Christmas. “The company is going to be one of the great ones strengthened after the crisis due to its competitive position in the market, and its ability to adapt and optimize its cost structure, which we hope will continue to strengthen in the coming years,” says Víctor Peiro, Director General Analysis of GVC Gaesco Valores.

The financial group has also included in Santa Claus’s sleigh values ​​such as Cellnex Telecom for its “potential market consolidator”, as well as Banco Santander and Banco Sabadell. The rise in interest rates has helped to rebuild its margins and recover part of the ground lost in recent years.

However, the five large banks that make up the Ibex have performed unevenly on the stock market, with domestic banks (CaixaBank, Bankinter and Sabadell) being the ones that have appreciated the most, compared to BBVA and Santander, which are more conditioned by the international context due to its high exposure abroad.

Within the values ​​of the Old Continent, it also adopts the same recommendation: energy and ‘telecom’. The Portuguese ren tops the European list for its ability to maintain profits “stable” and low risk. It also shares a list with the Portuguese NOS, which has a “good performance” from its investment portfolio.

However, it is France where its star values ​​are concentrated, with Galp, Veolia and Saint Gobain. In all three cases, their growth prospects stand out and they join AXA, which is recovering from Covid. From Italy, he pays attention to the company dedicated to the production of energy cables, Prysmian, which, in the eyes of Gaesco, has “the best product mix in its business model”. Analysts have put ‘utilities’ on their monitoring radar with an eye on the evolution of the war unleashed by Putin, which can change the course of the markets at any time.

Share
Facebook
Twitter
Pinterest
WhatsApp
Previous article
“Every house, every street is gnawed”: why is it difficult to get to the front line, and the cities are not taken in a hurry?
Next article
President of VSS Ufimtsev: What will be the fine for the lack of an OSAGO policy and how they want to catch violators KXan 36 Daily News