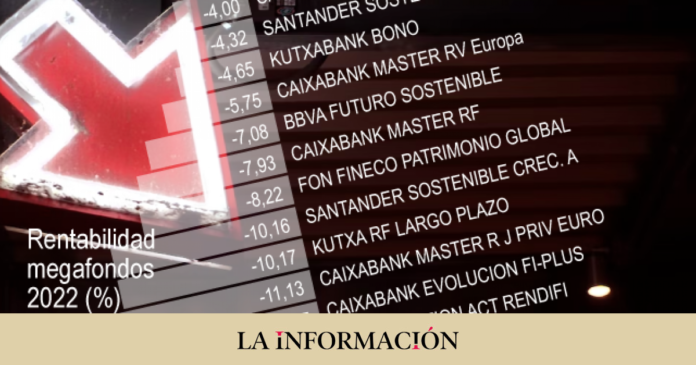 With the 2022 hourglass running out, it seems difficult that the large Spanish sustainable funds, those classified in article 8 and 9 of the Disclosure Regulation, are going to be able to turn around the bad result that they accumulate this 2022 21. Until December, according to Bloomberg, there were 14 products with a net worth above The best performance, with losses of 4 percent in the year, was achieved, however, by the product with the most net worth in the green and dark green range Spanish, the Caixabank Master Fixed Income Public Debt 1-3, which manages assets for more than 4,000 million euros.

This product, which is advised by Robeco, invests in debt issued by public issuers in the euro area. The duration of the portfolio would oscillate between 1 and 3 years and with respect to the credit rating, it would give more representativeness to investment grade bonds, since, at most, the weight of ‘junk’ (those with a rating below BBB-) can reach 40% of the portfolio.

The second best fund within the group of national sustainable megafunds would also be a specialized fixed income product; Santander Fixed Income Savings, which would lose around 4.3% this year. Although its size is significantly smaller than that of Caixabank, with a portfolio valued at just over 1,600 million, its investment objective would be similar; although with a somewhat more conservative touch than the Caixabank Master Fixed Income Public Debt, since it focuses on short-term issues, closer to one year, and the maximum weight in the portfolio of ‘high yield’ issues would be less, be limited to 5%.

The two vertices of stock funds

Caixabank AM is also in the lead -although for better or for worseif the behavior of the subfamily of sustainable stock funds is observed. Its Caixabank Master Variable Income Europe is, within the variable income category, the one that accumulates the fewest losses in 2022, limiting them to 5.7%, but another of its stock market products in the league of the largest in sustainability, Caixabank Master Emerging Variable Income is the most penalized, with red numbers in 2022 that exceed 18%.

The portfolio of these products is very different. The first is focused on European stock markets, which have suffered much less significant red numbers than some large emerging stock markets, such as China. Specifically, Caixabank’s Master RV Europa is exposed to great values ​​from the Old Continent with a special inclination to the health sector. Nestlé, Astrazeneca, Novo Nordisk, Roche or Novartis are among its main positions.

In the case of Caixabank’s sustainable emerging equities fund, although its most representative market is India, which is preparing to close the year positively and whose portfolio weight is approximately 29%, the product has not stabilized in positive. Samsung, Taiwan Semiconductor, Reliance or Itau Unibanco are some of its main bets.

The ’boutiques’ do better in sustainability

To look for positive returns in the family of sustainable funds with Spanish capital, one must look in the range of products with a lower net worth, although the green numbers are scarce this year. Of the 139 funds in this family with annual return data, only 6 would be positive with data from Bloomberg as of December 21. That is, only 4.3% of the total.

As of that date, the best Spanish ‘green’ product was Alcalá Multigestión Garp FI, from Gesalcalá Credit Andorra, with more than 80% profitability in 2022 and with barely 57 million euros in assets.

This fund is a mixed product that can move its entire portfolio from fixed income to variable income at the decision of the management team, which this year would have been fully successful with its positioning. It is classified within article 8 of the Disclosure Regulation; like the second best fund of the year, Andbank’s Esfera II Allroad, which would only have assets of just over one million euros, but which would have obtained a return of 40% this year.

The third best Spanish sustainable fund would be quite close to the line of 1,000 million, although its evolution is more discreet than the previous two, with a revaluation of 5%. The Magallanes European Equities series, which has more than 800 million in assets.