HomeLatest NewsThe star of the movie "The irony of fate or enjoy your...
Latest News

The star of the movie “The irony of fate or enjoy your bath!” did a good plastic surgery 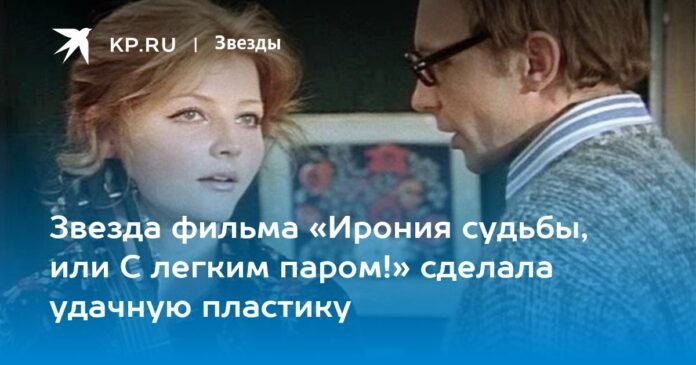 In the movie “The irony of fate or enjoy your bath!” Olga Naumenko played Galya at the age of 26, the girlfriend abandoned by Lukashin on December 31. Photo: frame of the film.

The main New Year’s film for Russians is “The irony of fate or enjoy your bath!”. This year it will be broadcast on December 31 at 19.15 on Channel One. And millions of women will again sympathize with Galya, who was dumped by Zhenya Lukashin on the main night of the year. Lukashin’s failed girlfriend was played by actress Olga Naumenko. The artist was detained on the street for many years, letters were written to the theater with words of support for Lukashin’s treacherous act. In the film by Eldar Ryazanov, Olga Naumenko played at the age of 26. In December 2022, Olga Naumenko turned 73, she works and looks great, much younger than her age.

Plastic surgeon Ivan Volodchenkov spoke about the successful plastic surgery of the star of the main New Year’s film.

Photo: Personal archive of the hero of the publication.

WHAT OPERATIONS DID THE STAR PERFORM?

Olga Naumenko recently received congratulations on her 73rd birthday, and with it, praise from friends and colleagues for her transformation. The result of the update is shocking: the actress looks 53, and not 73 years old. Naumenko did not hide from some colleagues in the theater: she underwent an operation, after which she occasionally supports her face with beauty injections from a beautician. Well, Olga Naumenko just thanks everyone else for the compliments from her. What kind of operations did the people’s artist Naumenko do?

Plastic surgeon Ivan Volodchenkov studied photos of Olga Naumenko over the years and shared his professional findings with kp.ru.

Naumenko in 2017 looks younger than his 68 years. Photo: frame from the TV series “Woman’s Heart”

– In the 2017 and 2018 photos, we don’t see those serious age-related changes that people who have never had plastic surgery at 68-69 have. On the actress, we see nasolabial folds, there are hints of fleas. But at this age, all these changes are more pronounced: the double chin passes from the lower jaw to the neck, which does not look so good without braces. An experienced eye of the surgeon will see traces of upper blepharoplasty: 4-5 years later, the skin of the upper eyelids begins to “recover” a little, due to which a slightly specific appearance appears that only a specialist can notice. She had braces on the middle and lower thirds (neck) of her face. Most likely it was SMAS plication and platysmaplasty.

In 2018, age-related changes are noticeable, but not critically pronounced: it can be assumed that the first operation was a long time ago. Photo: frame of the channel “Russia”

– In 2022, the actress has changed. In the images of 2022 you can see that the already classic circular facelift has been carried out. It is an endoscopic lifting of the upper third of the face (forehead and temporal zone). And the classic lifting of the middle third of the face, most likely, techniques involving the impact on the deep layers of the soft tissues of the face were used. Where previously there was already an elevator, in the future only more serious methods of operation act. This allows you to obtain the maximum aesthetic result and an excellent postoperative lifting result. The neck also changed, and there was a classic lift. As a result of the repeated operation, we see 100% rejuvenation on the patient’s face, and this is wonderful. We can say that the actress was operated on by a good plastic surgeon, who performed the optimal volume for the entire range of rejuvenation, and her actions led to a successful result. The result of the work of cosmetologists is also there: the lost volumes on the face were replenished, the structure of the skin on the face and neck improved qualitatively.

Olga Naumenko has changed in 2022: she looks great! Photo: frame of the NTV channel

WHERE TO SEE THE ACTRESS NOW?

December 31, 2022 in the evening Olga Naumenko plays in the play “Madame Rubinstein” at the Moscow Theater. Pushkin. Naumenko starred in series for now fashionable platforms and TV channels. In 2023, Channel One will show the series “Faina” with her participation, the films “Yaga 2020” and “The Tale of Female Friendship” will be released.