The star of the TV show Superstar Zhan Milimerov: “After the broadcast, Donetsk viewers write to me” 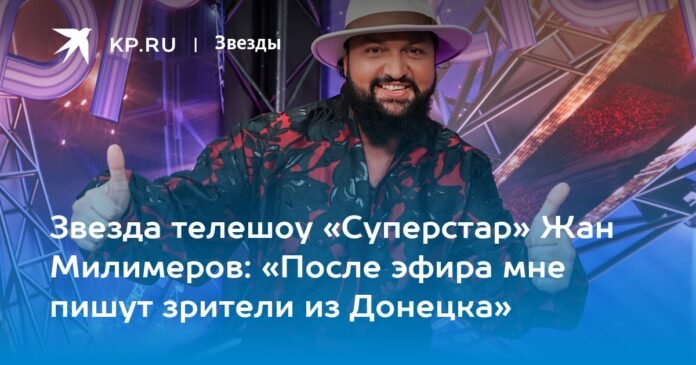 According to the results of the latest release of the TV show “Superstar!” the tournament table was headed by singer Zhan Milimerov. It was a semi-final, and the project’s super final will be broadcast on NTV on January 1 at 9:00 p.m. Jean Milimerov during the TV show has become a favorite of viewers. This year, the singer performed in popular TV projects on all major channels: he was on the jury of the Channel One project “Singing in the kitchen across the country”, he made beautiful numbers in the Duets show in Russia, and now he competes on NTV . Milimerov recorded the soundtrack for the film directed by Grigory Konstantinopolsky “Clipmakers” – the premiere in January. We talked to Jean about how that teleactivity affected his life and we also remember what New Year’s Eve was like in show business at the turn of the century, when he sang in the Prime Minister’s group.

– Participation in popular TV shows often leads to increased interest for the artist and new fans. This is especially evident on social media. I see you have many answers. Who writes to you?

– I receive many messages from people live. After each new release of the program, people write, share their emotions, impressions. I am grateful for this to the Superstar project. Now I see a greater interest in my work. Women write that they watch with their children, with grandparents and support me with the whole family, and they are in a good mood after watching the program; this is a balm for the heart. There are many such criticisms. I reply to all!

Where do people write from?

– From different regions. From time to time Donetsk people write to direct. They talk about the difficult situation they have, and how they see the program, they love my numbers, which helps them get a little distracted, bring out positive emotions, smile. Let the musical number continue for three minutes, but distract yourself from disturbing thoughts. For me it’s worth it. I correspond with several Donetsk families, thank you. Now is a difficult time, and the task of artists is to give people moments of positive emotions, give them the opportunity to be distracted and smile at least for a few minutes.

Zhan Milimerov after the broadcasts of Superstar! gets more response from viewers. Photo – NTV

– You are not only praised by the audience. But also the jury. Even the “evil” Sosedov. And if they scold you, are you offended?

– There were times when Sosedov did not agree with my interpretation of the song. Argued, discussed. And I take it as something completely normal. Each person has their own opinion of him. If a member of the jury did not like something, I will clarify what exactly it is and I will benefit from this new information. I will pay attention to this. You can never be beautiful without stopping. The main thing is to go on stage and do your job from the heart and honestly.

– New Year’s Eve for an artist is private events, performances. Has their number significantly decreased?

– Now there is a project, and I give myself completely to it. Although, of course, there are performances. In principle, everything has changed a lot in the last five years, and especially now. Previously, we knew that in December there would be 40 concerts, this has not existed for a long time. Now nobody knows anything in advance; it happens that a week or five days before the event there may be an offer to speak. I remember the days when we had a blackboard in our office and chalked up concerts a month in advance. There was stability: all the agreements were formed in a month or two. There is no such thing now, only with the best artists. Now there is no need to think, we live for today.

– You, in the jury of the project “Singing in the kitchen across the country”, noted what songs people sing most often. After all, what they sing at the table are their favorite songs.

– It all depends on the company – if the company is younger, then there may be some hit from the time of its youth. More mature people often listen to popular songs. Many now sing in addition to popular songs and hits, patriotic and military songs. This project is not about hitting the notes, but about the main thing: sincerity. These are the songs that most people sing.

– Another sample of the nationality of the song is that if it is sung in karaoke, it is redone on social networks. What songs of yours do people sing or redo most often?

– Honestly, I’m not a big fan of going to karaoke. I know that if you take the songs of the “Prime Minister”, then they sing “East”, “Girl from the North”, “Two Diamonds”, they love how we sing “The rain is crying” with Nadezhda Kadysheva.

Share
Facebook
Twitter
Pinterest
WhatsApp
Previous article
Yor Forger is ready to celebrate the New Year in a bold Spy x Family cosplay.
Next article
The footwear sector agrees to a total salary increase of 12.5% ​​until 2025