The State Duma wants to impose sanctions against the deceased Russians: what the authorities plan and who will be affected 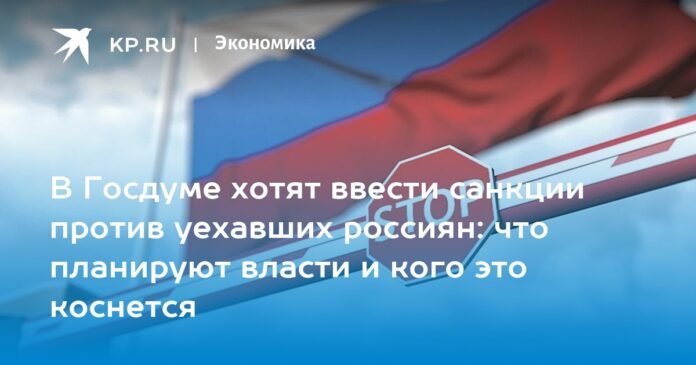 “A question of justice, or again about those who left,” was the headline of his Telegram post on December 25, the speaker of the lower house of the Russian parliament. Viacheslav Volodin does not agree with those who believe that it is necessary to give preferences and benefits to those who left our country in order for them to return.

“This is wrong,” writes the chairman of the State Duma. – But to this day, those who left not only work in Russian companies remotely, but also enjoy all the benefits that it gives them according to the legislation of our country. It is correct to cancel the preferences for those who left the Russian Federation and introduce a higher tax rate for them. That will be fair.”

ARE THE DEPARTURES EQUAL AS FOREIGNERS?

The proposal to “tighten the screws” for citizens who have left the country and who continue to work remotely in domestic organizations is heard for the first time in Russia. Not so long ago, this topic was raised in the Federation Council. True, then it was said that remote work from another country could be prohibited for civil servants, employees of the transport industries and employees of the field of information security, but the sanctions would not affect employees of private companies. Vyacheslav Volodin did not specify what exactly it is about.

“I think that if a person went to Thailand to rest for a month, it is unlikely that measures will be applied to him,” economist and anti-crisis manager Pavel Kobyak shared his opinion on Radio KP. – Here, probably, we need to talk about those who received a second citizenship, or completely renounced Russian citizenship, or have a residence permit in another country. Let me remind you that our tax legislation already provides that in order to be a resident of the Russian Federation, you must stay here for at least six months. If there is an increase in the period of stay outside of Russia, then there is an increase in taxes. That is, in principle, the mechanism already exists. And what mechanism do you want to include additionally now; So far, all this is only at the discussion stage.

Remember that according to the current rules, if a person is abroad for more than six months, he ceases to be a tax non-resident of the Russian Federation. And this imposes additional tax obligations on the employer. Thus, the income tax for a Russian citizen permanently residing in the country is 13%. Non-residents (who have another citizenship or live abroad for more than 183 days during a calendar year) must pay much more: 30% of income.

According to the expert, a maximum threshold for staying abroad is being discussed in the State Duma, for example, 2-3 months, during which people can rest there. And if they left for a longer period, we can assume that they will continue to work for our companies, as long as they live abroad. And if a person remains abroad for longer than the established time, the employer must notify the state. And then taxes can be increased for those who left the country for a long time. We have a personal income tax of 13% that applies to citizens of the country, in addition, there are social security premiums that the company pays for an employee. For those who have left, there may be an increase in the personal income tax rate. In addition, it is possible that a higher rate of social contributions per employee will be introduced for the company in which he works. And it simply won’t be profitable for companies to keep employees working remotely from abroad.

“But if a company has a branch that it opened in another country, and the employees work there officially, then there can be no talk of any sanctions against them,” Pavel Kobyak is sure. – You can only talk about those who left alone. And if a decision is made on measures against them, then I think that this will affect, first of all, those who have left for hostile countries. And then, perhaps, they will begin to further narrow the circle of opportunities for people to work from abroad.

THE ONE WHO ATTRACTS THE BEST STAFF WILL WIN

According to various estimates, from 500,000 to a million healthy Russians left Russia this year. Most of them continue to work for Russian companies, but physically live in other countries. As a rule, these are qualified personnel. Thus, the Ministry of Digital Development described the figure of 100,000 computer scientists who left their homeland. And the imposition of sanctions on such employees can force them to leave Russian companies, which will harm the country’s economy. When there was talk of a possible ban on working for Russian companies from abroad, the Ministry of Digital Development expressed concern about it.

– The introduction of a total ban may lead to a slowdown in the development of digital platforms and solutions, which may ultimately negatively affect their competitiveness. Our task is to use all the available intellectual potential of developers to introduce new digital services. In the end, the winner will be the one who can attract the most talented staff, who, among other things, are also abroad, the ministry said then.

The Ministry of Digital Development proposes to find a compromise between security and convenience. As for private companies, it seems strange to limit their choice in the choice of employees in general. In addition, in practice it is very difficult to separate those who work from abroad permanently from those who went there on vacation, to visit relatives, on business or on a business trip.

– And if a person in India or Dubai establishes parallel imports to the Russian Federation? Or do you ship from China? Or do you manage assets in Israel? – Evgeny Kogan, investment banker, professor at the Higher School of Economics is perplexed. – All these are friendly countries. Are these people friends or enemies according to your logic?

Vyacheslav Volodin invited his subscribers to leave comments about the need for sanctions against those who left. By noon on December 25, about 8 thousand had already spoken. There are those among them who support such an initiative, but there are also many opponents of the restrictive measures.

“Those who did this are their burden, and they have to live with it. And we need to develop here and now, ”writes the user Yulia.

“The key phrases are ‘work in Russian companies’ and pay taxes to the Russian budget, that is, they continue to work for the good of Russia,” subscriber Alexey notes in a comment. “If you turn your back on them, then they can easily find jobs in foreign companies, paying the taxes that are already there and contributing to their GDP.”